From kitchens that buy and sell locally grown food, to a waste co-op that will return compost to the land, new enterprises are building an integrated food network. It's about local people keeping the wealth of their land at home. 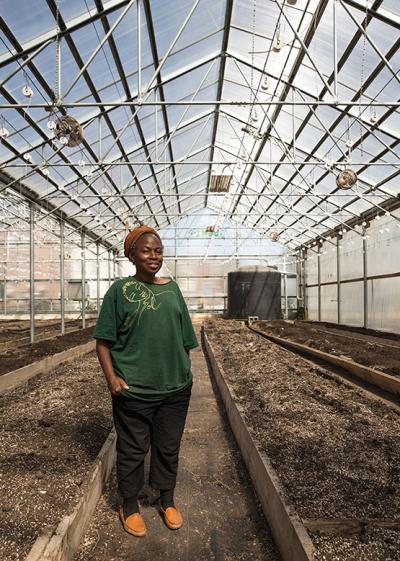 When Glynn Lloyd couldn’t source enough locally grown produce, he decided to grow his own.

Since 1994, Lloyd has run City Fresh Foods, a catering company based in Roxbury—one of Boston's lowest-income neighborhoods. He wanted his business to use locally produced food, but at that time it was hard to come by. So in 2009 Lloyd helped found City Growers, one of Boston's first for-profit farming ventures.

Today, City Growers is part of an emerging network of urban food enterprises in Roxbury and neighboring Dorchester. From a community land trust that preserves land for growing, to kitchens and retailers who buy and sell locally grown food, to a new waste management co-op that will return compost to the land, a crop of new businesses and nonprofits are building an integrated food economy. It's about local people keeping the wealth of their land and labor in the community.

“We don’t need big corporations like Walmart to come in and save us," Lloyd said. "We have homegrown solutions right here.”

Taking Back the Land

Growing local food starts with the land, and the current flourishing of food initiatives would not have been possible without residents fighting to control their land and development in the 1980s. Today, the Dudley neighborhood, which sits between Roxbury and Dorchester, has a 10,000-square-foot community greenhouse that has become a hub for the local food economy. But it sits on land that could have just as easily been occupied by a hotel or office building.

By the 1980s, Roxbury and north Dorchester had been devastated by the disinvestment and white flight of the 1960s and 1970s. Racist banking and housing policies (“redlining”) had segregated people of color from opportunity, barring them from getting home loans except in certain neighborhoods. Urban renewal programs and highway building dealt a mortal blow to those neighborhoods by taking homes and businesses and in some cases displacing residents. People were literally burning down their homes so they could collect insurance money and afford to move out. 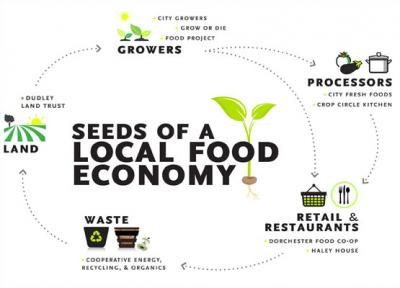 In the Dudley neighborhood, more than one-third of the land lay vacant—1,300 parcels in a 1.5-square-mile area. Gentrification plans would have transformed the area into hotels and offices serving nearby downtown Boston. But residents and community organizations resisted.

The Dudley Street Neighborhood Initiative (DSNI) brought together residents to develop their own comprehensive plan to revitalize their community. They successfully pushed Boston to adopt the plan and to give DSNI the power of eminent domain over a 60-acre parcel in the core of the Dudley neighborhood, known as the Dudley Triangle.

They established their own community land trust to take ownership over the vacant land and develop it. Now, almost 30 years later, DSNI boasts the development of more than 400 permanently affordable new homes and rehabilitation of more than 500 homes. The group has also developed parks and gardens, a town common, a community center, a charter school—and the community greenhouse.

With Boston's sky-high prices, affordable access to land for growing is made possible with DSNI’s community land trust. Their greenhouse is leased at low cost to the Food Project, a youth development and urban agriculture nonprofit. The Food Project earns enough money from selling produce that is grown in half of the space to pay much of the operating costs, and it allows them to offer year-round growing in the other half to local residents and organizations.

But it’s not just the greenhouse where the land trust makes a difference. For example, the trust recently gained ownership over a parcel that had been farmed by the Food Project on a year-to-year lease with the city, and is now granting them a 99-year lease.

The fight to revitalize local land doesn't stop with the DSNI. Since 2011, the youth-led Grow or Die campaign has taken more than nine vacant lots and built raised-bed gardens now tended by more than 100 families in Roxbury and Dorchester. Some of these lots have been vacant for more than 40 years.

“We’ve grown up next to all these vacant lots that were just collecting trash. We can take back the land and provide for ourselves,” said Hakim Sutherland, a youth organizer with the Roxbury Environmental Empowerment Project (REEP).

With land and greenhouses comes the fun part: growing food. The Food Project works with more than 150 teens and thousands of volunteers each year to grow food in the Dudley neighborhood as well as on larger farms in eastern Massachusetts. They sell food through community-sponsored agriculture programs and farmers markets, and donate it to hunger relief organizations.

At the same time, local residents are growing food for their own consumption. A summer 2013 survey by DSNI and Tufts University found that more than 65 resident gardens in DSNI’s core area were growing more than 50 types of vegetables and fruits, with some gardens more than 40 years old. The report estimates a yield of 4,400 pounds of produce from these “backyard” gardens.

But move away from home and community gardens and toward larger-scale agriculture, and access to land becomes more complicated. When Lloyd founded City Growers, he discovered city zoning laws made it difficult to do commercial farming within the city limits. City Growers developed a commercially successful model for growing on plots as small as a quarter-acre, but it was hard to expand. So Lloyd founded their nonprofit affiliate, the Urban Farming Institute, to help advocate for reform. Together, City Growers and the Urban Farming Institute helped push Boston to pass Article 89, a commercial urban-agricultural zoning ordinance.

Last July, ground was broken for the Garrison-Trotter Farm in Roxbury, the first urban farm permitted under the new ordinance. The farm sits on two vacant lots the city has owned since the late 1980s, in the midst of a residential area. The land will be owned in perpetuity by the Dudley Street Neighborhood Initiative’s community land trust and operated by the Urban Farming Institute of Boston.

Processors and Retailers, Old and New

The produce grown by the Food Project and City Growers can directly supply food to local processing businesses, retailers, and restaurants. These businesses are also sprouting in the neighborhood.

Lloyd’s City Fresh Foods, founded in 1994, is a veteran on the block. It has about 100 employees, and serves fresh, healthy, culturally appropriate, and locally sourced meals to schools, nursing homes, and other community institutions.

Another longtime institution is Haley House, in Roxbury, a social enterprise that grew out of a social service organization providing a soup kitchen and shelter for the homeless in Boston’s South End. They started their own farm in central Massachusetts in 1983 to supply their soup kitchen. In 1996, they started a bakery training program that serves, among others, the recently incarcerated. And in 2005, they opened the Haley House Bakery Café, which provides dining and catering and serves as a community gathering space.

Other businesses are just beginning. CCK Pearl, a new commercial kitchen incubator, is coming to the Dorchester neighborhood as the primary tenant of the former Pearl and Bornstein Meat factory. Since 2009, its sister food business incubator in Jamaica Plain, Crop Circle Kitchen, has helped more than 100 food businesses get off the ground. The new incubator hopes to produce 150 jobs in its first five years.

The Dorchester Community Food Co-op is developing its own member- and worker-owned grocery store, which will bring affordable access to locally grown produce. So far, they have several hundred members (paying $100 each), run a winter farmers market, and hold a “Fresh Fridays” summer festival on the site that they are planning for the co-op. Their store will also be a space for community education and cultural activities. 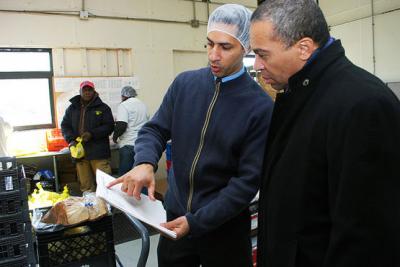 This homegrown food economy is still emerging. Right now, the entities described in this article already employ hundreds, involve the direct participation of thousands, and provide services and goods to tens of thousands more.

But there is still a long way to go.

For Lloyd, one of the key challenges is to “identify, nurture and nourish the innovators.”

One such innovator is the newly formed worker cooperative, CERO (Cooperative Energy, Recycling, & Organics), started by African-American and Latino workers who wanted to create their own green jobs. In a truly sustainable food system, bacteria and insects help process wastes (or any organic matter) back into nutrients that enrich the soil. As of October 2014, large businesses and institutions in Massachusetts will have to separate out their organic waste because of new regulations.

CERO plans to help local businesses separate their wastes, increase recycling, and reprocess their food scraps. They recently completed a successful crowdsourced fundraising campaign, and have launched a direct public offering to raise startup capital for trucks and equipment. They are also building community and political support to open up access to the city’s recycling contracts for local, cooperatively owned ventures like themselves.

“Many of us don’t come from conventional business backgrounds,” says Lloyd. “Innovation won’t just come from private sector, nonprofits, or government, but from all of them working together.”

Penn Loh wrote this article for YES! Magazine, a national, nonprofit media organization that fuses powerful ideas and practical actions. Penn is Lecturer and Director of Community Practice at Tufts Urban & Environmental Policy and Planning, where he coordinates the Practical Visionaries Workshop. This article is based in part on “The Emerging Just and Sustainable Food Economy in Boston” co-written by Glynn Lloyd.

The Emerging Solidarity Economy in Palestine