Involve Everyone in Production

The Basic Principle of the Economy in Rojava 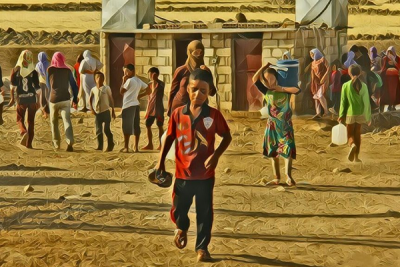 cross-posted from Co-operative Economy in Rojava and Bakur

This is an academic article translated from Abrstrakt Magazine, where it first appeared in Turkish on 5th October, 2016.

The basic principle of the economic policies of the Assad regime in Rojava was to keep the people poor and deprived in order to maintain their dependence. The Jazira [Cizîrê‎ / Cezîre] and Kobanî [Kobanê] cantons served as the breadbasket of Syria. Before the revolution, forty percent of the wheat consumed in the country came from Rojava, and agriculture is still people’s primary source of income. From Derik [Dêrik / Al-Malikiyah] to the east of the Jazira Canton, to Serekaniye [Serê Kaniyê / Ras al-Ayn] in the west, fields stretch alongside the roads, along with the sources of petroleum in the Rmelan [Rumelan / Ramelan / Rimelan] region. Before the revolution, sixty percent of the petrol used in Syria came from the Jazira region.

Rojava is a region left impoverished despite its riches. The first town I saw in the lands of the region was Afrin [Afrîn / Efrîn‎]. The cantons had not yet been established when I visited in September, 2013. When I arrived at the city bus terminal after crossing the border from Kilis with smugglers, I stood and simply looked around for a while. I was struck by the level of poverty and deprivation. Not only in Afrin, but also in the towns of the Jazira Canton where I stayed for a long time, I felt as if I was watching an old movie. The flimsy houses and shops that lined the streets and avenues were far from modern.

The Economic Academy of Rojava is the central institution for economic life in the autonomous enclave. The board members of the academy describe the politics of the Assad regime like this: “The Syrian regime saw the resources of Rojava as its warehouse. Wheat was cultivated here and purchased by the state, which then had them processed in a different region and only then sold to the people. No factories or workshops that would enable the processing of the agricultural goods that grow in the Jazira Canton were allowed.

This is the basis of poverty and deprivation on which the Rojava Revolution sought to establish an economy. Of course, these were not just results of the economic policies of the Assad regime. It is also necessary to consider the war that has ensued since the first day of the revolution. According to regime sources, seventy percent of the budget is reserved for defence. A third factor is the embargo. The border is closed between Rojava and Turkey. Only the entry point at Nusaybin has been intermittently opened for humanitarian aid. The border to the autonomous region of Iraqi Kurdistan near the town Semalka is only sporadically opened for a very short time and then closed down for months because of the politics of the KDP (the Kurdish Democratic Party) of Iraqi Kurdistan, which opposes the Rojava revolution.

The economy of Rojava is geared towards providing for the poorest and those without possessions. Its basic principle is the participation of everyone in production. In the words of a minister of economics: “If a single loaf of bread is manufactured in Rojava, everyone will have contributed to it.”

This model is defined as the communal, or social economy. Cooperatives represent the foundation of this model. These cooperatives were built on land that was previously nationalised by the regime, which was reclaimed since the start of the revolution. This makes up 80% of the autonomous territory.

In fact, the economic domain was the last one to be organised in Rojava. As the administrators of the Academy say, the provision of security for the people has inevitably been the top priority. The first step was the foundation of the Rojava Centre for Economy. Units were created in every town with the participation of engineers and economists with relevant expertise, along with other volunteers. Seed companies were set up to improve the agrarian economy and enable the villagers to carry on cultivating the soil.

The administrators at the Academy describe the model they want to create: “We reject the capitalist economy, but we are not adopting the economic model of real socialism either. Ours is a communal economy based on cooperatives. We do not block private initiatives but we are following a policy that prevents the formation of monopolies.

What does the constitution say?

The Rojava Social Contract states: “Everyone has the right to the use and enjoyment of his private property. No one shall be deprived of his property except upon payment of just compensation, for reasons of public utility or social interest, and in the cases and according to the forms established by law.”

Article 42 defines the principles of economic organisation, alluding to the the socialist principle of ‘each according to his need’ as follows:

The economic system in the provinces shall be directed at providing general welfare and in particular granting funding to science and technology. It shall be aimed at guaranteeing the daily needs of people and to ensure a dignified life. Monopoly is prohibited by law. Labor rights and sustainable development are guaranteed.

In summary, the means of production in Rojava, with its factories, land, forests, water and underground and above ground resources, are the property of the Democratic Autonomous Administration. The Rojava Revolution is not opposed to private property. However, the political and ideological hegemony of the communes and cooperatives, which are regarded as the political, social and economic organisation of the people, and the main power of the revolution, the poor and the dispossessed, show today that the direction of development is towards expropriation.

One of the economic goals of the revolution is to prevent monopolisation. How will this be achieved?

This question is one I have asked both members of the economic academy as well as officials in the ministry of economy. They have stressed that, “The goal is to found cooperatives for everybody in all areas of life and to further spread the communal economy.”

The board members of the academy added:

Rojava is a place in which almost no monopolisation, industrialisation or even heavy industries ever existed. There are small investments, however. We strive not to destroy these investments with an approach of real socialism, but to win it over for the needs of society. We started the communal economy with this in mind, and we use it as a weapon against private property. The basis of our politics is the communal economy. The more we promote it and develop it further, the more private property gets weakened. The more we develop our own system, the better we can oppose monopolisation of private property. We have strengthened the will of the people on the political battle field, and we have weakened the state apparatus. It was the same with the economy. Our aim is to further develop our system. One of the first measures against monopolisation were trade cooperatives.

The cooperatives are connected to the communes. The communes are the basic management tool of the Rojava Revolution. They are of great importance, because they are building a life in which everybody participates in government, and the state apparatus becomes superfluous.

“If a single loaf of bread is manufactured in Rojava, everyone will have contributed to it.”

The project of the cooperatives is relatively new. Before they were founded, a different model was applied in the transitional stage before the establishment of the cooperatives. During the time between the seizure of power by the people and the foundation of cooperatives, the land was used by individual operators. 50% of the product was taken by the autonomous government, while the other 50% remained with the operator. Additionally, the operator was obliged to put down a deposit in exchange for the land.

Dozens of cooperatives have been founded so far. In Serêkaniyê, over 30,000 dunams [decares] of land was transferred to the cooperatives and harvested. In Derîk, the greenest town of Rojava, the cooperatives planted over 50,000 fruit trees. In Amuda [Amûdê / Amouda], over 20,000 households were organised under agricultural cooperatives.

In summary, the revolution aims to supplant the capitalist economy through the communal economy, just as it seeks to make the state redundant by organising the community in communes and bringing everyone into positions of power.

All of this is taking place under conditions of siege, embargo and war. Revolution is also the practical unfolding of this dream. That being the case, this is just a picture what the Rojava Revolution could achieve in conditions where the siege and war are overcome.