The following is a personal story about corporate cooptation at my food co-op in Northern California, North Coast Cooperative Inc.

North Coast is the largest consumer food co-op in California with a membership of 15,000 and over $30 million in annual sales.  I was a director for 12 years, including (recently) 2 years as Vice President of the board.  I was also President, for about 10 years, of the co-op's Community Fund, which is a $600,000 fund that disburses approximately $15,000 annually in community grants.

Years ago, the workers formed a union because previous management had been unwilling to address workers’ needs.  In mid-2013, the co-op management brought in its attorney to represent the co-op in contract negotiations with the union. This in itself produced an adversarial relation with employees, since it brought in an outside expert to mediate between management and employees, in what should have been a direct, personal negotiation in which both sides consider the needs of the other.

The union did not bring an attorney to the negotiations. Management's attorney was not only unnecessary, but confrontational and uncooperative--and expensive.

Co-op management claimed that they had to bring their attorney to every session so as to avoid mistakes and have immediate legal advice on every issue. However, previous managers never felt this need. When a legal issue arose, previous managers simply deferred responding until they spoke with their counsel by phone. Most of the discussions around contract negotiations do not involve arcane legal issues that require legal advice on the spot.

Moreover, the co-op's attorney did not wait to speak on special, technical legal issues--he was the main player for management. He made the presentations of the management's position, he argued for their side, and he responded to all the union's comments. This was clearly unnecessary and had never been done in the past.

Even more adversarial was the fact that the management’s lawyer specializes in curtailing unions and workers' rights and benefits. The management's attorney was Brad Kampas. His web page brags:

Kampas has practiced labor and employment law exclusively for management for over 25 years. He has represented numerous employers with respect to labor and employment law matters, and has significant experience in the areas of union relations, contract negotiations, grievance arbitration, union avoidance, and day-to-day strategic advice...Mr. Kampas represented CAHF [California Assocition of Health Facilities], the U.S. Chamber of Commerce, and other employer associations in the recently successful federal labor law preemption challenge to a California Statute (AB 1889), which effectively prohibited employers who receive state funds from engaging in union avoidance activities. [emphasis added]

Kampas' law firm is Jackson and Lewis in San Francisco where he was, at the time, a Managing Director.  It has a long history of busting and preventing unions. Jackson Lewis works with the National Right to Work Legal Defense Foundation and the entire National Right to Work network. This is the movement that helped elect union-busting governors in Michigan and Wisconsin.

Some of Jackson Lewis's anti-union campaigns are described by American Rights At Work as follows:

Borders is a regular client of Jackson Lewis. The firm helped Borders crush union support by firing union activists and threatening to close stores if workers voted for union representation. Borders even banned Michael Moore from speaking at an event at all stores because he is a known union supporter.

It is astounding that the seemingly liberal, progressive, community-oriented, North Coast Cooperative would employ this neoliberal juggernaut to conduct negotiations with its employees. Indeed, with this explicitly anti-labor lawyer interceding between the management and the union, there was clearly no room for cooperation.

Management has reduced the work force 20% in the past two years while increasing productivity. This has made work much more intense and stressful.

Abetted by their counsel, co-op management made an initial proposal to the union that would reduce employees' medical benefits and their pay step increments. Management's wage proposal was to put entry level wages at $10/hr. (equal to California's new minimum wage), provided an annual increase of 3% (30 cents/hour after the first year) and required 12 years to reach the top pay scale (the current pay scale grants 5% increase/year and only requires 8 years to reach the maximum level). Other local chain stores allow employees to reach their peak wage levels in 4 years.

In addition, management has reduced the work force 20% in the past two years while increasing productivity. This has made work much more intense and stressful. As a result, sales and profit margins have risen in the past year, especially in the past few months. Instead of sharing these gains with the employees who produced them, management followed the neoliberal strategy of their attorney to squeeze employees even further.

Union representatives at the negotiations report that the bargaining sessions were extremely tense and acrimonious. The GM even yelled at the union reps, and the attorney was condescending and sarcastic to them. Negotiations stretched out to 5 months, longer than they ever had in the past.

Of course, the attorney profited from this disagreement and duress because he was paid more the longer the negotiations were prolonged. He had a vested financial interest in abetting disagreement, in addition to pushing a combative, anti-labor agenda and attitude.

In addition, the co-op's monthly newletter, Co-op News refused to discuss the issue or inform its readers about the controversy. I raised the issue of Jackson Lewis participating in the negotiations in a letter to the editor of a local newspaper--this is how the employees learned about it. 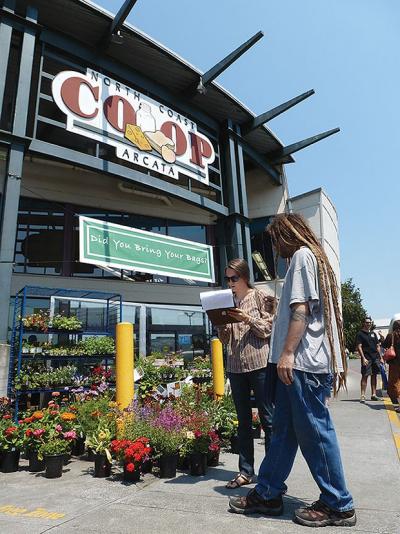 I followed up by writing a similar letter to the Co-op News on Aug. 19, 2013, to ensure that co-op members were aware of the situation. The management refused to publish my letter! Nor did they respond to me individually to acknowledge they had received it or that they would not publish it. The September Co-op News simply omitted the letter. The General Manager did obliquely comment on the issue in her monthly column. She simply said that negotiations with the union were continuing and that the issue of the co-op's attorney had "taken on a life of its own." She never explained what the issue involved. Thus, she prevented co-op members from learning about the issue. Of course, some members read my letter to the editor, but most undoubtedly did not.

Management's anti-labor position in the negotiations incensed employees and led them to set up public information tables outside the Co-op's two supermarkets to enlist the public's support for workers' living wage. They collected approximately 2,000 signatures.

130 members, workers, and supporters picketed outside the November, 2013 board of directors meeting. One member spoke to the board and said that she has $250,000 invested in the Co-op and wanted to know how much was being paid to the attorney. The board and manager simply replied that they had budgeted for legal fees and the cost was within the budget amount. They refused to tell the members the exact amount that they paid Jackson Lewis [1]. 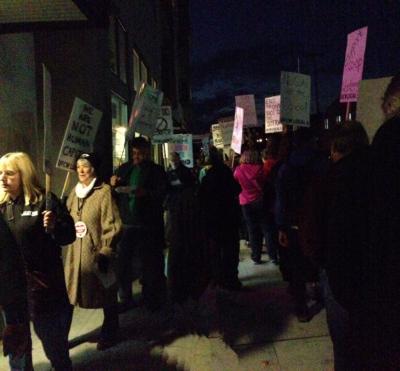 This fear, anger, and protest on the part of employees is unprecedented. Employees felt they could not deal with management cooperatively, so they had to enlist support from shoppers and members. It is the inevitable result of management's neoliberal policy.

The corporate-abetted antagonism of management (and board) to its employees poisoned relationships on even the most microscopic and trivial levels.

Contract negotiations were held in a local labor temple which charges $15 per day for use of its facility. The co-op management-board insisted on splitting this fee with the union. The co-op required its own employees to pay $7.50 for each day that bargaining occured! This is divisive, petty, antagonistic behavior. It objectifies and highlights the antagonistic interests that the two sides have. The co-op cannot even magnanimously pay the entire $15 as a show of common interests and inclusiveness. Instead the co-op estranges employees from every possible interaction with management-board. If the co-op cannot pay $7.50 for the employees, cooperation on substantive issues--such as running the co-op--is out of the question.

After negotiations dragged on over 24 sessions, a provision called for a federal mediator to intervene. The mediator resolved the impasse in two sessions!

As reported in a press release to a local newspaper on Jan. 1, 2014, virtually all the union's demands for wages and health benefits were accepted with minor modifications. The final contract included an annual 5% wage increase over three years to the employees, plus a $250 bonus to each individual. This maintained the existing wage level. The union had hoped for an increase on the grounds that productivity had increased 15% over the past few years, due to management's cutting of the work force. The only management demand that was accepted was limiting the wage increments of the highest paid employees. However, this only affected a few long time employees and the union was willing to allow this in the context of a reasonable package.

The final bargaining sessions epitomized the vast divide between the two sides. Each side retreated to separate rooms, and the outside mediator met with the attorney for management and the union rep. As discussion ensued, each representative walked back to meet with his group in private and then returned to relay the group's opinion. The two groups never interacted face-to-face. The spatial separation reflected the social separation of the two sides. This is the antithesis of cooperation.

Management did not report the angry picketing of its November Board meeting, nor did it report any of the uncooperative details of the bargaining process.

Management did not report the angry picketing of its November Board meeting, nor did it report any of the uncooperative details of the bargaining process that I mentioned. Nor did they mention anything about the Jackson Lewis law firm. The Co-op News is not an inclusive organ that gives voice to employees, or even members. Members are permitted to submit suggestions about products that the Co-op sells, but there is no space for members to write about the relation between management and employees, the direction the Co-op is going, etc.

This event indicates an inadequate conception of cooperation. There needs to be extensive education of board members, management, and employees to understand and advance the concept and practice of cooperation.

[1]  The fact that one member has invested $250,000 and received 3-7%, depending upon when she made the investment, while poor members have no money to invest and earn zero interest in the bank, falsifies co-op ideology about the equalizing force that co-op principles possess.

Come for the Beer, Stay for the Revolution!