The Biofábrica Campesina and the Solidarity Economy Movement 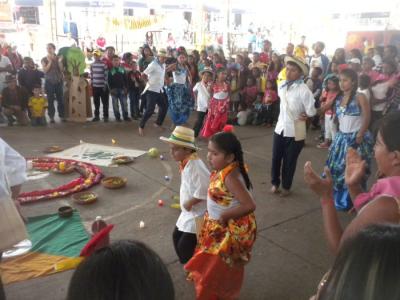 The sister-city relationship between the tri-cities of Syracuse/Cortland/Ithaca and Cajibío in Cauca, Colombia, a project of the CNY chapter of the Colombia Support Network, reached a 10-year milestone in 2014. Twelve CNY resident activists traveled to Cajibío as part of the sixth delegation in the relationship’s history.  An overlying theme that has emerged with time is the transition from the relationship’s more purely “solidarity” origins, to recognition of our shared challenges and search for solutions, including opposition to capitalist economic structures and resource extraction.

With little governmental help for sustainable agriculture and increasing costs of items such as chemical pesticides associated with industrial agriculture, small farmers in Cauca have turned to the production of compost.

“Systemic transformation” is the most descriptive strategic terminology for the role the Biofábrica Campesina project plays in the Cauca solidarity economy movement—regional efforts to create economic sovereignty outside of current repressive capitalist practices. It highlights how Biofábrica is not only centered on creating food sovereignty, but also social change from economic equality and reciprocity, and partnerships at the local to international levels for advancing the small farmer movement.

The economic difference to the small farmer is staggering. One bag of compost costs approximately 10,000 pesos, 7 to 8 times less than a bag of chemical fertilizer. In addition, the compost is sold right within the local community in which it is produced, reducing the need for expensive transportation infrastructure arrangements.

The income of a small farmer in Colombia is much smaller compared to that of the minimum salaried worker in Colombia. But their needs are also less in terms of providing for a dignified life. This dignified life is one based on their desires to restore an ancestral heritage related to farming practices, and to maintain personal and familial sovereignty without giving in to lifestyle changes brought about by neo-liberal policies (in which many families are forced from their land and into urban areas, dead-end jobs, and living conditions out-of-sync with dignified life traditions). This compost production business, which alone is supporting 11 families that work on the project, provides a major contribution towards the realization of this life.

The ecological benefits to the land and farming success are also huge. As climate change affects growing seasons and rain cycles, rainwater collection and irrigation timing have become difficult.  Compost has the ability (unlike chemical fertilizer products), due to organic matter content, to hold water in the soil for an extended time, providing a buffer for irrigation practices.

International profiteering through capitalism will stop at no end...because capitalism has no directive to include human rights over revenues.

The Biofábrica operation began with financial support from the Movimiento Campesino de Cajibío (MCC) through a 2,000,000 peso investment. Although 40% of this money was granted to the Campesina, 60% was in the form of a loan at 1% interest. This loan is paid back as part of a revolving cycle of reciprocity between the community members, and seeds the next solidarity economy project—such as a forthcoming egg production business.

The small farmer solidarity economy was further highlighted at the second Feria Campesina (Small Farmer’s Fair) coordinated by the MCC. Seeds, knowledge, flavors, farm products, and cultural heritage (art and dance) were exchanged during a day of celebration. But more than celebration, the event was meant to highlight the Campesina’s campaign to be recognized as a distinct population by the Colombian State government—a community with rights and responsibilities, and a voice in Colombian governmental proceedings.

Looking at one of the most quoted definitions of the solidarity economy, provided by Alliance 21— which convened the Workgroup on the Solidarity Socioeconomy in 2003, one can recognize that these economic and community building activities outside of the profit-driven corporate culture of current neo-liberal economics demonstrates such a recognized population already exists within the Campesina:

“Solidarity Economy designates all production, distribution and consumption activities that contribute to the democratization of the economy based on citizen commitments both at a local and global level.”

These solidarity economy actions by the Campesina also highlight the goals and challenges that we as a sister-community, and international brethren, share together in the face of government corruption and corporate domination. These shared goals and challenges hold the potential for galvanizing the solidarity economy movement within Cauca, Colombia and everywhere else around the world.

International profiteering through capitalism will stop at no end as we know, because capitalism has no directive to include human rights over revenues. But the Campesinas in their actions, and those of us in solidarity, can continue to create a new world order of mutual aid, self-development, and economies based on care as central to our worldview. Social and economic change must follow a dual-fold path of political engagement, with the underlying surging path of direct action through solidarity economy actions.

Frank Cetera is a 2014 CNY-Cajibio Delegate.