Work Smart and Beware the Wolf 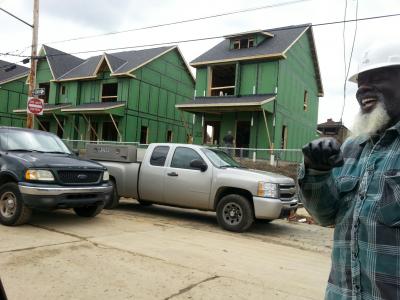 The cast of characters assembled on vacant lots in Larimer, an East Pittsburgh neighborhood. A fiery community champion, the barons of the local political machine, real estate wizards behind the curtain, well-meaning outsider technical allies, residents (some savvy, others, unfortunate sheep), and a homegrown wolf on the prowl among them, were all there.  The players who animate urban revitalization, renewal, or gentrification, by any name, are familiar. Keeping one eye on a clearly defined prize, and the other on the local wolf is key to a successful end game.

What can distressed communities like Larimer realistically do to chart and clear a pathway out of poverty? What’s possible? And what part does environmental resilience play in the story?

The preface was classic. Larimer, Pittsburgh’s highly segregated and poorest neighborhood suffered and survived thirty years of drug and gang saturation, and resident flight. The Larimer population is nearly 87% African American to Pittsburgh’s 27%.  The monied barons and wizards didn’t invest a dime in Larimer during that period, letting the neighborhood and property values wither on the vine so they could later glean the spoils for a pennies on the dollar. The stage was set for a motivated team of activists who stood on the shoulders of earlier Larimer community legends.

In 2013, community crusader Fred Brown, second in command at The Kingsley Association, a revered community hub with 150 years of momentum, took stock of the situation. Questions on his mind were: where are the holes on the playing field that Larimer might slip through to a strategic win by, 1) not wasting time railing against inevitable gentrification?, and, 2) What did the community value most that could realistically be salvaged in the face of advancing “economic development"?

Astute communities have learned that it’s futile to point fingers at invasions of hipsters, yuppies, and developers. Gentrification is just a symptom of systemic ills which community residents trying to make ends meet can’t take on. It’s a byproduct of powerful economic forces fused with structural racism and reflected in longstanding federal government policies which spawn neighborhoods like Larimer. Recognizing this, Brown joined forces with the Larimer Consensus Group (LCG) a collaborative of residents and community organizations for the tactical battle ahead.

The LCG implements the Larimer Vision Plan and focuses on big picture community wellbeing.  Developers and businesses who approach the LCG, which vets their projects, are often required to modify their plans to meet community specifications. Neighbors ask the right questions and press for what they want through the LCG. However, Betty Lane, team leader of the LCG Redd up Action Team, reports that government and business meet with community members primarily to check off the “community input” box, and in the final analysis proceed to do whatever they had already planned. 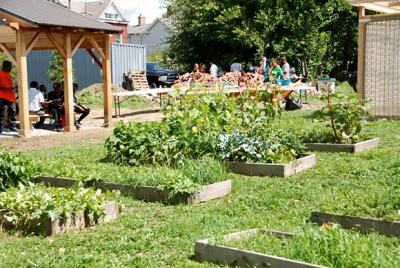 LCG Treasurer Donna Jackson remembers that what residents wanted most was a “green community.”  As a trainer for the Transition environmental movement Fred Brown knew that resilience-building and relocalization of the economy could mitigate gentrification by enabling a lower cost of living in the neighborhood for the most vulnerable in the long run.

Fred tried the Transition model on for size, conducting two Transition trainings in Larimer but dropped that idea. He observes that, “the Transition process, laden with activities and meetings doesn’t have the bite to get traction in a community like Larimer. Transition is for people who have the leeway and choice to do things if they want to… or not. In Larimer the dam is already leaking. The needs are immediate. People are hungry and just getting by day to day.” Further, “[the UK originated] Transition model needs to be applicable across the pond. Race is a divider in activity here. Transition never did its cultural competency integration homework.” 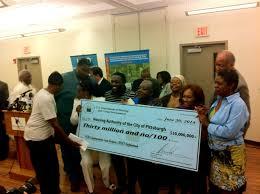 With Brown’s coaching, the team was so effective that in June of 2014 they landed a $30 million Housing and Urban Development (HUD) Choice Neighborhood Award. Fred’s continual mantra at the time, which would echo in people’s minds later was that, “vulnerable people need to have their hands on the [grant implementation] steering wheel, directing the car.”

The Living Waters of Larimer Project, conceived by the community and technical partner Keepers of the Water, was to have been the capstone of the neighborhood’s environmental resilience-building work. The Larimer plateau, historically surrounded by the buried Negley and Two Mile Run waterways is ideal for water remediation. Betsy Damon, internationally renowned functional water installation sculptor and principal of Keepers of the Water, was brought on board to help address some of Pittsburgh’s water infrastructure problems.

A ground breaking, community-led water project would have become the centerpiece of Larimer’s redevelopment, giving the people greater control over their own resources.  Damon organized a team of architects, artists and engineers to help make that happen. 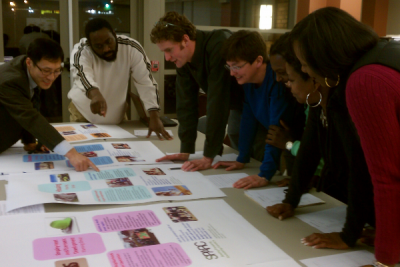 The LCG, Fred Brown, and Betsy Damon knew that enduring community resilience-building is about relationship. They were determined to lay the groundwork properly.
Damon and the LCG organized community dinners and Living Waters brainstorming sessions, at which residents planned medicinal herb gardens, orchards, a paper-making business, hydroponic farms, and a cistern-sculpture-fountain from which both the human and natural ecosystems would be nourished.

Damon spent a year getting to know residents and their visions for Larimer around kitchen tables. She and bonded community friends were certain that they were spearheading the design of a comprehensive infrastructure plan.

Just as Fred Brown had coached the LCG to a 2014 HUD grant, Betsy Damon led Living Waters of Larimer to a successful bid for a $450,000 2015 Art Place America award. The grant would fund a neighborhood water catchment system that would creatively transform 80 million gallons of rainwater from waste to a resource supporting businesses and jobs.

What factors turn possibilities into realities?

For a while it seemed as though Larimer would throttle out of its downward spiral. Then entered,... the proverbial homegrown “wolf.” All the while Fred Brown had simultaneously been locked in a struggle on behalf of community control with a local titan who has intimate ties to the barons and wizards behind: the Urban Redevelopment Authority (URA), the managing member of the Pittsburgh Urban Initiatives LLC (PUI), and initiator of the Pittsburgh Economic and Industrial Development Corporation (PEIDC), and the Pittsburgh Housing and Development Corporation (PHDC). For this pack of corporations, obtaining community buy-in is only a rubber stamp means to a lucrative end. Unfortunately, wolves excel at financial shell games and the betrayal dynamic is confusing for residents when the predator looks and sounds just like a community member. The steering wheel was gradually pried from the community’s hands.

The project went sideways and lost steam in 2015 when its champion Fred Brown left the Kingsley Association to continue integrity-honoring work nearby with fewer constraints. Betsy Damon was subsequently pushed out within days after the Art Place grant she had orchestrated landed. 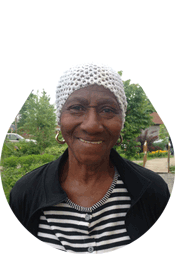 Fast forward to August 2016. Betty Lane shares that a fraction of those displaced to accommodate the HUD grant redevelopment will be able to find affordable housing in the community. Lane, who left Living Waters of Larimer in solidarity with Damon and Brown, also recounts that the Art Place project is stalled. Residents who, with the LCG, had labored over selection of two sites for the cistern-sculpture have been told that those locations are no longer viable. And, it’s looking like the project will soon be tucked up under the Urban Redevelopment Authority. Hearts were broken in Larimer. And the beat goes on, yielding valuable lessons.

Key points in an activist’s tactical game plan are:

But above all: Never lose sight of the homegrown wolf, the foil lurking in the shadows of poverty eradication initiatives. Since he’s a native-son, the damage he leaves in his wake slashes deeper into community tissue than that of the callous, outside monied interests.

Larimer is ever resilient however. The LCG recently hired an energetic and astute staff person who hit the ground running. And a three-lot oasis of colorful flowers, medicinal herbs, and fruit trees offers hope in Betty Lane’s Community Healing Garden.