Finding a Balance of Public and Private

[Editor's note: Communities Magazine, the long-time publication of the Fellowship for Intentional Community, is currently experiencing a funding shortfall, and is seeking new subscribers and donors to ensure that they can keep the lights on for another year and keep providing the high-quality, insightful articles on cooperative living that they have become known for.  Purchase a subscription or make a donation on their website.] 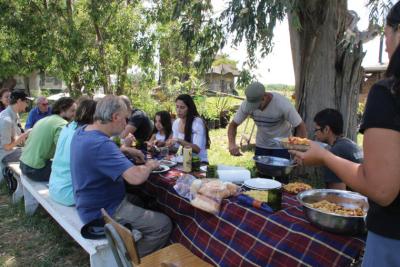 I have arrived at the community towards late afternoon. Their homes are spread over a large expanse of property and there is no one at the communal area, so I drive along the road, looking for the right place. My hire car is a bright orange Spaceship and hard to miss and before long I am approached by a woman who marches up and raps on my window. I wind it down to say hello. “What are you doing sticky beaking around here?,” she barks.

If there is one theme that keeps emerging from my living in and travelling amongst communities, it is the issue of public and private space. In the individualistic society which is promoted by global capitalism, it’s a radical act to choose to live collectively. Sharing, be it space, food, or resources, has not been strongly promoted by those who want us to consume as much as possible and our shared spaces, the commons, if you will, are being swiftly eroded by private interests. School grounds are being sold off in lucrative housing deals, parks are being replaced by offices, and forests are being bulldozed to make way for roads. Whilst it’s true that in communities with an environmental focus, the sharing of resources is a defining element of their raison d’etre, the sharing of space continues to be fraught with difficulty. As people brought up to hold privacy and private property dear, we are often too keen to delineate that which belongs to me and is mine, and mine alone. For instance, those choosing to live collectively in the ’70s often chose to share land and property. Now, even in community it is far more likely that individual houses and plots will be held in private ownership.

The division between public and private space is one which can be encoded into a community’s earliest plans and amended as members discover the reality of their individual needs. At Commonground Co-operative in rural Victoria, Australia, they decided early on to share all facilities. They even had a “shared purse” whereby all income was pooled and divided equally amongst the members. Their home was designed and built collectively, with a communal kitchen and dining room and shared meals. However, from the outset, each resident was given their own private room and even people in couples have their own individual quarters. Bathrooms are communal, too, but with a concession that if you want some privacy, you can hang a sign on the door to let others know you don’t wish to be disturbed.

The shared nature of community life is probably the part which most of us would find a challenge. “Sharing with other people?” teases Myles, a member of Tasman Ecovillage in Tasmania. “Living side by side? Eating together? I found the idea abhorrent!” Myles cites his inner “recluse” as the reason for this, but the truth is that we all have moments when we need to be quiet, when we want some time “to ourselves,” and we worry that community life will be too busy for that.

In the example I gave at the beginning, by way of explanation I was told that the community was “sensitive” regarding visitors. A high profile ecovillage, they had been under public scrutiny since their inception and a number of their members run regular courses and workshops. Recently, confided one workshop leader, a school bus of children had become stuck in one of the narrow lanes and blocked the way for some time. The community was not amused!

So how do people cope when their unique homes are the subject of curiosity, their way of life peered at from every angle? Some communities, like the Lammas ecovillage in Wales, have been developed as a demonstration of what is possible. As the first settlement to gain planning permission under new Welsh government One Planet regulations, it must seem to them as if they are always being watched. To help counter this, there are set times when the land is open to the public, for instance during courses or on Open Days throughout the summer months. Even so, the public face of the project can sometimes feel quite different to what is going on in reality. In the short film “Lammas and the Media,” made as part of the Living in the Future series about low-impact communities, Jasmine Dale comments: “If a person doesn’t know you, then it’s easy to be misunderstood out of context. So you might say something that could easily be…taken the wrong way.”

Nigel Lishman, secretary of the organisational body of Lammas, adds: “Communities are not the easiest thing, especially if you’re trying to reinvent a pioneering ecovillage community. I get asked by so many people ‘what’s the hardest bit here?’ And you look around and you look wider and out to the planet and you see, that it’s people getting on with other people… They’re all arguing about the same thing. Your population are coming over our border so we’re going to shell you…same old b—–ks!”

Nigel and his wife Cassie chose the Lammas project because it was pitched in between the “share everything” ethos of the commune and the “share nothing” model of living in private ownership. Sociologist Dr. Bill Metcalf describes how intentional communities exist along this sharing continuum, but stresses that in order to reduce conflict, the boundaries have to be clearly stated. Community elder Peter Cock, of Moora Moora near Melbourne, agrees. “It’s important to know what you can and can’t do.”

Perhaps the most interesting analysis of the implementation of public and private boundaries comes from Robin Allison of Earthsong Eco-Neighbourhood in Auckland, New Zealand. A trained architect, Robin facilitated the design and building of this successful cohousing community in the suburbs. The analysis of how they utilise public/private space comes from permaculture, the holistic theory developed by David Holmgren and Bill Mollison in Australia. Robin told me that Earthsong has three “zones.” Zone one is their own private homes, where they each have a bedroom, living room, kitchen facilities, and small garden.

Zone two is the space which, in Robin’s opinion, has the most impact on “green” behaviour, being outside of peoples’ private homes, but inside the relative safety of community boundary. It is where the residents most often interact and is designed so that people interact with each other in the course of their daily lives. It includes the common house, where there is an industry-standard kitchen, communal washing machines, a large dining area, a yoga room, and a generous balcony with seating. Earthsong has a lively LETS program and residents come to the communal house to record their points in a scheme that exchanges skills such as babysitting, sewing, cooking, and gardening. Zone two also includes the shared gardens with a vegetable plot, compost, and chook pen. A shared parking space keeps cars on the edge of the property but also means that people have to leave their private space in order to reach their vehicles. The communal bike shed and tool shed are also in this area.

Zone three is the space outside the community boundary, which residents see as a space for interaction with their neighbours in the street and wider locality. They have developed a good relationship with local businesses and public facilities such as the library and they play an engaged role in community activities. Robin considers zone three as the most exciting zone to be playing with and has established a group which calls itself YIMFY—Yes In My Front Yard. YIMFY aims to make use of this space to share ideas about ecological living, waste reduction, and sharing resources.

In my own community of Holts Field in Gower, Wales, there has always been a “Table” which serves as a focus for informal (and sometimes formal) gatherings. The Table sits at the edge of the central green and people take their meals there, meet for a drink or just a cuppa. Shared barbecues, bonfire picnics, and children’s parties gather at the Table and it is always a point where conversation can happen as residents pass on the way to their homes. On one memorable, if sad, occasion, a community member was laid out there in his beautiful wicker coffin, where he was remembered, blessed, and sung to before being carried up the path and out of the community to be buried.

In a traditional village, the point of connection for people would often have been the village hall or green, and having a shared space seems vital for maintaining connection between residents—through such things as social gatherings, meetings, musical events or film screenings, shared meals or simply a cup of tea. These spaces are where relationships are created and developed, where problems are aired, and where connections are forged. At Cascade Cohousing in Hobart, Tasmania, resident and founder Ian Higginbottom commented that problems were far less likely to arise between folk who shared informal time together.

To my mind, a community without shared spaces is barely a community at all, which is why the erosion of the commons by private interests is such a disaster for modern human settlements. In intentional communities, we see the value of having a place where people can come together to share, whether it be stories, resources, or simply part of ourselves. As our parklands become car parks and our social centres become shopping centres, we lose the vitality of simple human interaction to the self-centred pursuit of consumer goods and private wealth. In this regard, intentional communities might be able to show us, amongst many other things, why access to the commons is worth fighting for.

Helen Iles is director of the Living in the Future series of documentaries about sustainable living and communities. You can watch 60 short films in this series by visiting livinginthefuture.org. You can also order Helen’s three longer films at that site or at www.ic.org/community-bookstore/category/community-bookstore-videos. Helen’s home is in Holts Field, a chalet community in Gower, Wales.