A new project to develop law and policy that supports justice, sustainability and democracy 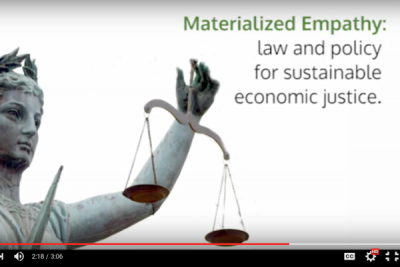 Commonomics USA is delighted to announce their latest project, Materialized Empathy (on Facebook here). Materialized Empathy is an organization to develop progressive law and policy to support economic justice, sustainability, and local, democratic management of resources. If you are familiar with ALEC, Materialized Empathy aims to be a kind of anti-ALEC, returning public discourse to the public and playing a role in turning back the trend of privatization.  Resources and services that were once truly public (such as schools, transportation, etc.) will be returned into the hands of local communities who will manage them responsibly based on local needs and priorities.

According to a project description released by Commonomics USA, Materialized Empathy will “research, publish, and teach model law and policy; produce daily information and weekly podcasts; and host and facilitate public deliberation on sustainable, cooperative economic justice and the law.” Matt Stannard, the Policy Director for Commonomics USA, says his coordination of the project combines his experience in “public and personal advocacy, legal research and writing, media and podcasting, and public deliberation and debate.” In addition to serving as his organization’s policy director, Stannard is also a member of the Public Banking Institute’s board of directors, and has helped draft nondiscrimination ordinances for cities, and postal and public banking resolutions for the United States Conference of Mayors. He has also assisted in indigenous land rights litigation in Kenya, and researched land disenfranchisement in Cambodia for international human rights organizations.

Stannard and Ma’ikwe Ludwig will coordinate Materialized Empathy. Ludwig is a cooperative culture expert and executive director of the nonprofit behind Dancing Rabbit Ecovillage, one of the nation’s leading ecologically sustainable intentional communities. Ludwig has supported dozens of communities’ efforts to create sustainable policies and practices nationwide, and serves on the board of directors of the Fellowship for Intentional Community.

The group plans to begin podcasting in early 2016, building momentum for revitalized public discourse on a range of progressive issues. The early work will also include “a targeted survey of organizations to determine legal and policy needs specific to many areas of economic justice, multi-media platforms and deliberative events, and a paid legal and policy internship program." In late 2016, supporters can expect to see published research on access to legal resources, barriers to cooperative housing, challenges to public and postal banking, and climate egalitarianism. Future work will include engagement on worker-owned cooperatives and the implementation of socioeconomic rights.

About her role in the organization, Ludwig says, "Of special interest to me is the chance to work on developing policy that would make it easier for intentional communities and local economies to flourish, paving the way for real solutions to climate change."

In addition to giving to the Indiegogo campaign, the group would appreciate help spreading the word among aligned networks. They also invite connections with other aligned organizations who see themselves benefiting from this work.