New alternative and complementary currencies are a growing worldwide trend, and many states in the US have created their own local curriencies. Our local alternative currency, the Hudson Valley Current, has members in several counties straddling the Hudson River, just above New York City. It began with just a few of us; each coming to the idea from very different places. There was a libertarian who didn’t like central control of the monetary system, a Buddhist economic theorist yearning for a more equitable system of exchange, a second-generation newspaper publisher striving to create a better environment for his kids, an activist artist with a social practice working among struggling local farmers, a veteran of Occupy Wall Street committed to creating a sustainable economic system and an accountant with an abiding interest and experience in time banking and other alternative money systems.

“Alternative currency” simply means money other than the official government-issued currency. The term “complementary currency” highlights the quality of functioning alongside the existing monetary system, rather than attempting to replace it. The local type of alternative or complementary currency is created to strengthen local economies and it strengthens Transition efforts to create more resilient communities.

There are various types of local currencies which can differ quite fundamentally, and there are also many nuances in the details of design and implementation. For example, perhaps the most well-known Local currency in the United States, Berkshares, are issued as paper money and available at local banks in exchange for U.S. Dollars.

The Hudson Valley Current is a digital, mutual credit based system. It is not convertible to dollars. The issuance (creation) of Currents takes place through the exchange of goods and services. Each member begins with an account that includes a “line of trust” (also known as a “line of credit”). When one member pays another member, the money is created as a credit and a debit on the members accounts. The mutual credit that backs the Hudson Valley Current is interest free. This is a significant fact in light of the oppressive role that interest-bearing debt, and money issued on that basis, plays in the conventional economy.

All local currencies have the intent and effect of encouraging people to trade within a specific region. Studies show that buying locally has a strong multiplier effect in terms of the circulation and retention of money within a community or region. Local currency encourages and enhances that behavior, simply because the currency must be used in that area. Local currency also builds awareness and a sense of economic community -- qualities that are sorely lacking in the impersonal national and international levels of the economy. Hudson Valley Current Board of Directors 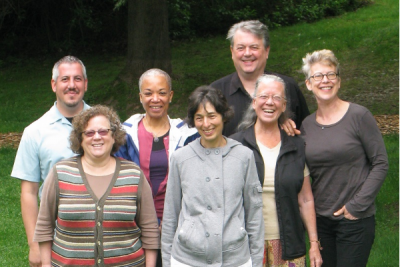 We held regular study and work group meetings for several years to learn about all these aspects of currency, economics, and more. We read and discussed the opinions of thought leaders like Thomas Greco and David Korten. We sponsored events, showing films about money followed by Q+A panels. We tabled at festivals and conferences and were able to introduce the concept to hundreds of people, sign them up to our email list, and welcome many as members. The local Transition movement, which consisted of a several efforts like a tool library and free health care clinic, as well as an enthusiastic core group of more than 100, helped us coalesce and spread the word among interested community members. Gradually, we discovered like-minded folks and formed a more formal group with a board of directors, a fiscal sponsor, and a small office and staff that consisted of a part-time executive director and an intern.

We reached out to other local currency projects, from those in neighboring counties and states to those across the globe. Our neighbors in Massachusetts, founders of Berkshares, provided very valuable advice. We decided to begin with a membership comprised only of locally owned businesses to create a robust economic base for our currency. We also chose to use an electronic mutual credit platform, not only because paper money is more expensive to produce and to secure, but because mutual credit literally creates money, and therefore opportunity, by virtue of its very structure. As described above, it is not limited by the amount of paper money printed, it is created as needed by the exchange of goods and services.

At the end of 2013, we launched a beta-test of the system using a well-regarded international platform called Cyclos. We put out a call for fifteen (15) local volunteer businesses to serve as test-case guinea pigs. Due to the complexity of creating a local currency, our beta test period has lasted for many months, during which we’ve learned a lot and ironed a lot of kinks. For instance, communicating the concept of local currency has proven to be maddenly difficult--as difficult as explaining how US dollars work. Like walking, it’s much easier to simply do, than explain how! As of mid-2015, this word-of-mouth test has grown to over 200 business members who have exchanged over 110,000 Currents. In addition to boosting the activity of our local economy, we’re forging connections among local businesses that keeps more money local and promotes both financial and relationship prosperity.

From the outset until now as we near our formal launch, our group has gone through many experiences together. We’ve worked hard to learn the best ways to work collaboratively as a group, to apply new economy thinking and a triple bottom line mentality (people, planet, prosperity) to all of our decisions. We’ve joined with a wonderful group of supportive local people and organizations: financial wizards, doctors, executive coaches, our local BALLE business group, the local farmers association, and more.

We immersed ourselves in emerging New York State regulations aimed at money systems like Bitcoin which threatened to put us out of business, and we successfully strategized with government officials to keep that from happening to us and other alternative currencies. We’ve been fortunate to have received grant money to help us do all this. Together, we’ve geeked out over the minutia of money systems. We’ve laughed, shouted, even gone head-to-head at times as we steadily work toward our goal.

As we work we are discovering that as varied as our core group’s motives were, others we meet are bringing their own compelling reasons to create and use a complementary currency. We all sense the deficiencies of the US dollar and the virtues of a homegrown system of neighbors helping neighbors, keeping local what we can, supporting a strong local eco-system of food, clothing and shelter.

What is Money Anyway?

There is a significant educational side of local currency. At some point people will ask themselves, “What is money anyway?” Just posing that question is a positive outcome in and of itself. Aside from thinking about the way money functions, and perhaps more importantly, it gives people the opportunity to become conscious of their attitudes and feelings about the use of money.

What is Trust and Its Boundaries?

Currency systems, because they use a token that represents the value of goods and services, are always based on some kind of trust, promise, or agreement. Even Bitcoin, which claims to be a system where “no trusted third party” is required for transactions (a fact that should obviously give us pause), relies on trust in human creations like mathematics, cryptography, and the Internet. In the case of government-issued money, agreements are based on law and authority. With local currencies organized by civil society, community-based trust is the quality that is required and nurtured.

Taking responsibility for co-creating a currency, as opposed to leaving it to established authorities, brings up many important questions, such as “Are we--as individuals and a community--psychologically and fiscally healthy enough to trust and be trusted? What are the boundaries of that trust? Do we realize that by sticking only with national currencies, we are putting our trust in our government and private banks? Is that trust warranted?”

Trust is a key component of resiliency and even human survival. The flavor of the Transition Movement tends toward the idea that we had better start exploring those trust issues now, even if it sometimes takes a little extra work. As we build for the future, we are motivated by an important resiliency factor: local currencies can function independently of national currencies if and when those currencies, and their associated financial systems, break down.

Despite the many valid arguments in favor of local currencies, there are significant challenges to their implementation. In particular, we humans have very strong habitual patterns around money use. We resist transaction methods that challenge our routine. A critical mass of businesses, both in numbers and variety of offerings, must be reached for a currency to become sustainable.

A local currency is not a complete fix of an economic system. It does not directly address wealth building or the distribution of wealth. However, some types of alternative currencies, notably mutual credit based systems, offer potential for significant economic benefits through increased local economic activity, liquidity, and so prosperity.

At a deeper level, we should note that a local currency is not an automatic antidote to our materialism, or our complacency in depending on the modern global economy. But it does offers a way beyond these patterns if we are willing to make the effort. Developing and using a local currency is an important “piece in the puzzle,” and nurturing such systems is a very strong form of economic activism.

David McCarthy is an activist and writer in the realm of new economics. He is the co-founder of the Hudson Valley Current and author of the book Civil Endowment — The Transformation of Economic Power. Maria Reidelbach is an author, artist and local food activist working with farmers in the Mid-Hudson Valley. Her most recent book is the Stick to Local Farms Cookbook.

David McCarthy is an activist and writer in the realm of new economics. He is the co-founder of the Hudson Valley Current and author of the book Civil Endowment — The Transformation of Economic Power. Maria Reidelbach is an author, artist and local food activist working with farmers in the Mid-Hudson Valley. Her most recent book is the Stick to Local Farms Cookbook.