A diversity of kindred approaches to alternative political economics is emerging across the country.  Many of them share a regional focus. This is showing unusual potential for advancing the development of worker co-operatives through inter-cooperative and cross-sector networking.  We are calling this Regional Cooperative/Solidarity Economic Development (C/SE) (Please see the note below on why we are using this unusual phrase, “cooperative/solidarity.”) 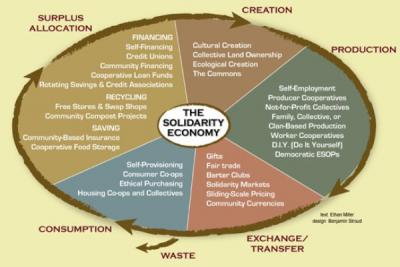 Grassroots Economic Organizing (GEO) is convening a one-day conference that will focus on this emergence. It will take place at Worcester State University (WSU) in Worcester, MA, on July 10, 2015.  Since it will be GEO’s third Advancing the Development Worker Cooperatives conference, we are calling it “ADWC 3.”  The Earth Environment and Physics Department at WSU is co-sponsoring the event with us.

The purpose of this one-day conference is to explore ways to build local alternative economies that will help to solve economic and social problems in our communities.  We are reaching out to leaders of these diverse political economic initiatives across the country as well as leaders from social justice and civic engagement movements who are and who want to be supportive allies in regional economic development.  It is what GEO is calling Movements Moving Together.

The focus of the conference will be on:

In addition to worker co-operatives and other co-operatives a diversity of kindred approaches to alternative economics has been evolving over the past few years in the US.  Many of these approaches are deeply oriented to bottom-up development, where democracy and cooperation can be more deeply rooted locally.

Right now cooperative/solidarity networks are emerging in more than a few regions across the country.  In western Massachusetts, central Massachusetts, New York City, Baltimore, Philadelphia, Madison, Detroit, Jackson, MS, Austin, TX and the Bay Area, to name a few of them.

GEO will also publish an online Theme, collecting articles written by participants and others focusing on the most relevant issues. That Theme that will be posted a month or so before the conference.

We hope you will join us. You can tune your involvement from low- to high-grade. There will be three specific ways for individuals to do this:

In addition, your organization can co-sponsor the ADWC 3 conference.

You can begin by joining the ADWC 3 Google Group—just send an email to one of the conference organizers:

The structure of the conference will involve three 1½ hour interactive group discussions including light breakfast, lunch, two breaks, and a wrap-up discussion. There will be no formal presentations during the day.

The objective of this structure is for participants to talk directly with each other about 1) the challenges and opportunities they are dealing with in their regions, 2) the resources they need, and 3) how we can work together across regions over the coming years and decades.

The specific topics of the discussions will be developed through consultations with potential participants over several months leading up to the conference. This will happen through exchanges in the Google Group.

The process will involve two facilitators for each discussion. As we did in ADWC 1 in Baltimore in 2011, 25-30 participants will sit in a circle for face-to-face interaction around the topic at hand. Another 30 or more observers will encircle this group during each of the three discussions. The specifics on how this will be arranged will be worked out through our online collaboration via the ADWC 3 Google Group. However, the total number who can attend will be limited to 60-70.

Interaction among these two groups will occur during breaks and at lunch during the conference, as well as during the ECWD conference (Friday night through Sunday) for those attending both conferences.

Again, if you are interested in being involved or just keeping informed on how things evolve, join the ADWC 3 Google Group by sending an email to one of the conference organizers:

Thank you for taking the time to read this. We hope to hear from you.

Michael Johnson and Ajowa Nzinga Ifateyo, for the GEO Collective

NOTE: A conundrum of names, labels, and brands

The term “cooperative/solidarity economics” may seem to be a bit of a clunker, but it is our way out of a conundrum. A diversity of kindred approaches to alternative political economics has been evolving. This has been accompanied by a welter of different names such as: the commons, alternative economics, “New Economy,” “Commonomics,” “Shared Economy,” “Commons Economy,” “Worker Cooperative Economy,” and so on.

The approaches we identify with most are those that are deeply oriented to bottom-up development, which is key to democracy and deep cooperation taking deeper root locally. Co-operatives—especially worker and consumer—are a primary example. However, the solidarity economic movements here and across the globe—as in Quebec, Brazil, northern Italy, England, etc.—involve many kinds of democratic economic enterprises that are not co-operatives.

So, we hit upon “cooperative/solidarity economics.” Hopefully, it is not too clunky a way out of the conundrum of names and brands.