From Cop Dramas to Co-op Dramas

Why We Need Media Cooperativism

Article type
GEO Original
January 8, 2018
Authors
Cadwell Turnbull
Body paragraph
The cop drama exists in infinite variations. Cop drama set in New York, Miami, Los Angeles and Hawaii: CSI, Law & Order, Criminal Minds, Hawaii Five-O. Cop drama plus a writer of cop dramas: Castle. Cop drama plus a zombie: iZombie. Cop drama plus the devil: Lucifer.
The assumption is nothing beats a good serialized cop show. Insert interesting characters and you've got a hit. Insert a cool gimmick and you’ve got a fandom. It hasn’t been proven wrong so far or there wouldn’t be so many of them.
I’ve binged Criminal Minds. I’ve watched at least one season of iZombie. I love Castle. Castle has a special place in my heart because I’m a writer and it speaks to me, at least in some vague sense. I don’t write cop dramas, but I do appreciate seeing someone in my same chosen profession having an important role. 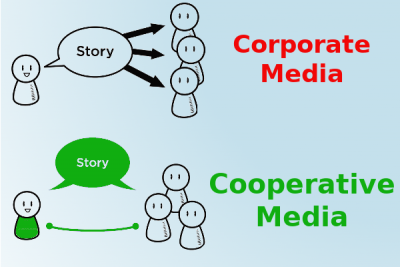 On the other hand, I’ve never seen a cooperative on television or in film. This strikes me as an injustice because I’ve seen so many corporate dramas with flawed characters struggling to the top of nightmare capitalist companies whose actual purpose is only vaguely defined. Infinite variations of those dramas exist along with their cop drama brethren. And a massive captive audience shows up to watch them too, despite the sociopathy those dramas perpetuate.
What is striking about these narratives is that they often exist without deconstructions. Cop dramas never question their own legitimacy. Corporate dramas never end with the suits deciding to start a cooperative. These narratives are seen as so normal, so generic, there’s no need to ask bigger questions.
That normalization teaches a subtle lesson to viewers: this is the way the world works. This is the world. The absence of leftist alternatives reinforces that narrative.
But what if the left presented another version of the world, the one we see, of people finding alternatives to organize their lives and work? What if we presented our own dramas, comedies, science fiction, fantasy, and histories? What if instead of the status quo in infinite variations we produced the left in infinite variation?
This goes deeper than just presenting stories on the left. It would mean presenting those stories as the default, as the world as it is. The left often laments how much of revolutionary action is missing from our media. What if we could show what we wish we saw when watching TV and film? What if we could do all of that cooperatively?
Here’s a picture of what that would look like. Imagine media cooperatives that produce their own content. They work democratically to create stories of the left as it is, not as niche, not as a point to be argued, but as a life lived by many. The stories are truthful, filled with conflict, both personal and societal.
These media cooperatives are constantly expanding their repertoire and skills to tell better stories. Stories that explore the power of group effort, instead of the hero worship of a select few. Stories that show more of the world than we usually see when we plug in. No limits to what can be explored through narrative. Every corner shown. A wide eye instead of a narrow one.
Using the profits of that work, the cooperatives fund news sources that depict the real lives of people on the left in all its complicated beauty, not shying away from the conflicts they find there. Full pictures of living breathing people, not glossy myths like we’re used to in our mainstream media.
What if instead of the status quo in infinite variations we produced the left in infinite variation?
As an answer to the hierarchical corporate media, these cooperatives create their own film festivals, their own honors, based on celebrating collective work instead of singular genius. They make their own channels, theaters, and subscription services based on mutual respect between workers and their customers instead of profit margins above people.
The media cooperatives fund research projects and cooperative universities. They provide funding and other resources for start-ups and provide platforms for new cooperatives. Instead of money going into bloated budgets for the next blockbuster, these cooperatives encourage a more sustainable form of media that doesn’t assume the centrality of dominant groups as the default audience. Decolonialism through media that shows the good work being done everywhere, beyond the Overton window of our mainstream politics.
It wouldn’t be so hard to get there. The left has so many stories waiting to be told and the resources to do so. What if we directed our passions towards art that centers us instead of the problematic politics we’re fighting against? What if we made our own narratives that dissect and interrogate ourselves? A community needs its own stories. Stories have always been the way we build our world. It is what guides us as people, the way we tap into our best selves. We need better stories, ones that are as honest, expansive, and layered as our lived experiences.
I’d rather watch that than another cop drama. Wouldn’t you?
Go to the GEO front page

Cadwell Turnbull is a graduate from the North Carolina State University’s Creative Writing MFA in Fiction and English MA in Linguistics. He is a writer of science fiction and fantasy with work appearing in Asimov's Science Fiction, Lightspeed and Nightmare.