Imagine a respite from the relentless torrent of bad news! Both The Transition Towns (Transition) and  Intentional Communities movements facilitate secession, to varying degrees, from the exploitive culture that surrounds us, and build alternatives that are supported by broad networks.  Now the two movements have joined together to share lessons learned about egalitarian community building. 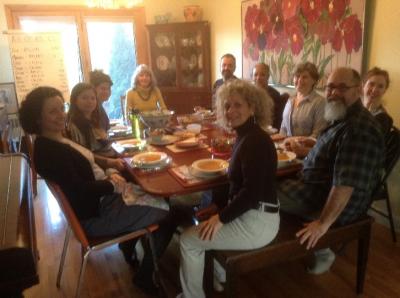 The Transition and Intentional Communities movements offer pathways to recovery from an abusive, extractive growth-economy. Their proponents seek wholeness through cooperation. The movements embrace anyone with the gumption to self-liberate from the corrosive mainstream matrix and commit to resilient social practices that foster the unity of people and the planet.

Intentional residential communities are groups of people dedicated to figuring out how to live together cooperatively. Transition Towns, villages, and city neighborhoods are local nodes of people, connected through a global network, who are determined to wean their localities from fossil fuel dependency and move toward resilience.

Neither model is a magic bullet. But both movements can learn volumes from the other. To that end, the Mid-Atlantic Transition Hub (MATH), The Fellowship for Intentional Communities (FIC), and the Federation of Egalitarian Communities (FEC)—networks that support Transition initiatives and intentional communities respectively—are purposefully pursuing cross pollination.

Interchange between the two movements is happening in the zone where their missions overlap. That is, in the space where people wake up and summon the grit to live consciously, seek wholeness, and unplug from the dysfunction of the homogenized American norm. The Federation of Egalitarian Communities (FEC) has joined the Spokescouncil of Egalitarian Resilience Networks, an “affinity circle” within the MATH Constellation, to help spark the joint work of the two movements. The Spokescouncil is working to hold both movements accountable to the basic tenets of egalitarian process. 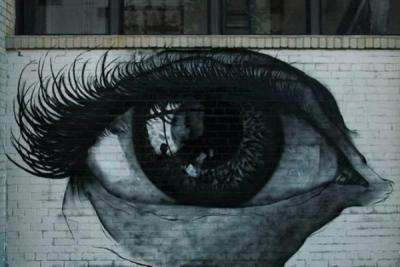 Whereas the pursuit of wholeness through cooperation is embedded yet latent in the DNA of the Transition movement, hundreds of intentional communities already demonstrate just that. Irrespective of how diverse a group of people in an intentional community may be, they necessarily share an allegiance to the baseline value of sustained cooperation. Transition initiatives do not have that luxury.

While “collaboration” and “cooperation” have become buzzwords, relatively few Americans—conditioned as we are in a competitive, top down, power-and-control culture—know what that looks like in practice. Authentic cooperation requires people to change deeply imprinted habit patterns that are continually reinforced by society.

Accelerating climate change means that incessant “transitioning” is the new norm to which we’ll be adjusting for perpetuity. MATH frequently reminds constituent groups that “transition” connotes profound transformation. And that transformation begins from within. 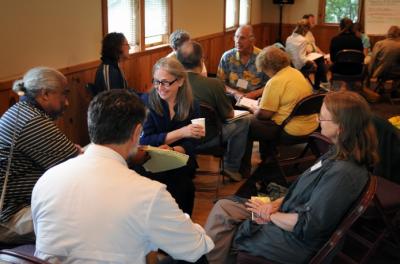 Laurie Simons, documentary filmmaker and member of the GANAS community in Staten Island NY, reflects on her personal transformation: “I am used to being right. However, I’m finding that I’m no longer concerned about being right. I went from feeling threatened if not right, to asking for and welcoming input from others. By listening to others’ perspectives my ‘rightness’ is enriched...People bring ideas that I would never have thought of and I end up with something that is more effective and sensitive.”

Michael Johnson, a founding member of GANAS notes that, “The community began with the research question, ‘Why is it that communication breaks down and community operations so often revert to top down?’ Over the years we’ve created a culture of cooperation that permeates members all of the time; tapping into the cooperative aspects of their personalities.”

Both movements face challenges. The Transition movement must dispel its erroneous small-town, back-to-the-land image, especially in the Mid-Atlantic megacity corridor. Similarly, intentional communities are challenged to shake off the utopian-hippy-commune stigma.

In fact, far from 1960’s throwbacks, 21st century egalitarian, income sharing communities are the epitome of New Economyprinciples— compassion in action that can usher in the “next system.”As per GPaul Blundell of the Point A Project,“In intentional community, more of our lives are of common interest. In egalitarian, income-sharing communities, your life IS the economy, and work is recast as cooperative work. So the material and financial aspects of your life and wellbeing are of public interest.”

Waxing strongest when times are toughest, the Transition and intentional communities movements offer wholeness in authentic community as an alternative to demoralizing social fragmentation. True to form, these movements are doing what they do best—working together to overcome challenges.

The Transition and intentional communities movements demonstrate that we are never out of options. We are resilient.