No Bosses Here! a manual on working collectively and cooperatively (1981) by Vocations for Social Change Staff, Karen Brandow and Jim McDonnell

Creating a Life Together: Practical Tools to Grow Ecovillages and Intentional Communities (2003) by Diana Leafe Christian

Co-Ops, Communes, and Collectives: Experiments in Social Change in the 1960s and 1970s (1979) Edited by John Case and Rosemary C.R. Taylor

I started writing this with a mission to explain just why it is that so many food co-ops suck so much. I was going to interweave personal narratives with historical background and legal analysis and tie it all up in a bow. But, as life is, the issues I was going after are far larger than my local co-op, and I moved three times, so let’s say I got a bit side tracked. 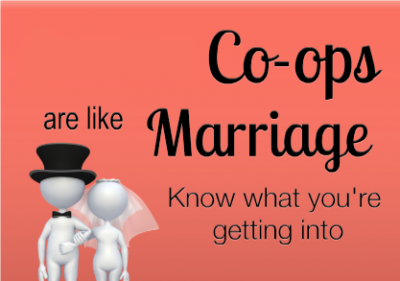 In asking people to diagnose the particular suckiness of [redacted] Co-op Grocery, the inspiration for this inquiry, the best thing that could have happened did--someone sold me a copy of Co-ops, Communes, and Collectives. Then I got on this whole kick of reading about collective process and now this is a book review. Here we go: If you have ever worked with some “non-hierarchical, directly democratic” group, whether it was trying to smash the state or make dinner, a lot of this will sound familiar. Things get tricky, right?

Anarchist subculture can be more than a wee bit youth oriented but it turns out people have been trying this thing for, like, a long time. And I don’t mean a romanticized notion of indigenous peoples' social organization. What I mean is that for as long as there have been hierarchical societies , people have been dropping out of them and trying alternative, sometimes non-hierarchical modes of organization to fulfill their needs and even sometimes to attack governments. Also sometimes they form cults or wingnut colonies like Slab City, but that’s another article. 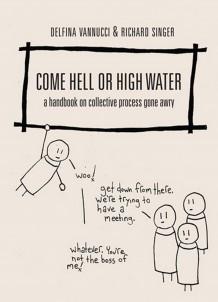 So, yeah, when you’re in these groups, people want different things, they come from different backgrounds and bring divergent ethical assumptions. And of course everyone is impacted by the dominant culture, which fosters behaviors (power mongering, competitiveness, jealousy, greed--what is this, the Bible?) that directly clash with non-hierarchical organization. Shit is difficult, but possible to overcome.

If you want to believe it's not possible, I recommend reading Come Hell or High Water. This one was a big forehead slapper with the exception a few key points, especially a fairly convincing argument for voting. But for the most part it reads as a rant. And while ranting has its place, this just didn’t do it for me. The book hinges on the strange premise of some ideal collective group that forms and then falls from grace, after being undermined by particularly difficult, dominating characters. It's not that I haven't experienced exactly that (minus the “ideal collective” part), but I find as the basis of a book, it's less than useful. I cringe at the thought of someone with no collective organizing experience reading this as an introductory manual. And even though the authors claim the book's target audience is experienced organizers, they do make nods to the uninitiated along the lines of "Um, don't get discouraged. It could work. I guess." 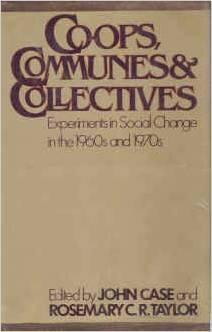 It's a sad thing to forget, when your collective group tanks, that it's not just your fault--that there's a whole culture saying that whatever you're trying to do is silly and destined to fail, and, when it does, that you shouldn't have tried in the first place. There's a particularly American affliction at work here: too often the “bootstraps” myth worms its way into collective culture, whispering, If you just tried hard enough, it would work.

Co-ops, Collectives, and Communes offers an antidote by managing to be pretty posi without over-idealizing its subjects. The overall gist is that the success of democratic, alternative institutions is not based in their longevity or even their ability to reach that many people but in their impact on the imaginations of the people directly involved and that of culture at large. Instead of documenting a process of working hard at heady goals then selling or burning out , the essays follow people as they move in and out of various organizations, remaining loyal to the idea of a movement though their ideas may change and lose their outwardly radical aesthetic.

Whether or not it constitutes appropriation towards ultimately capitalist and oppressive ends, the book chronicles a similar lifespan for the ideas seeded by alternative institutions, which can and have filtered into the mainstream on the heels of their progenitors’ collapse. The educational styles of democratic and progressive schools, the holistic approach of free clinics, the aesthetics of radical media are ubiquitous today though their sources have folded, faded, or adopted new more radical ideas. This kind of analysis won't necessarily stand out to folks who've been in it for the long haul, but it sure is encouraging. 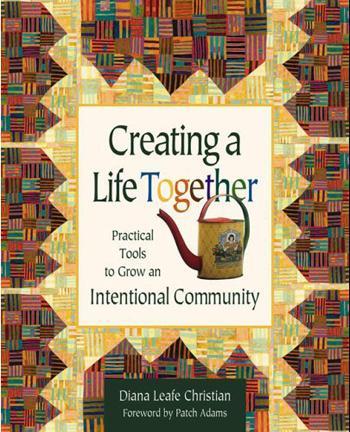 Plus, it's interesting to read people in the '70s writing about the '60s (For example Ray Mungo as quoted in "The Phantom Community": "A free community does not have meetings...Nothing is expected of you, nothing is delivered. Everything springs of natural, uncoerced energy."). Some of the essays are painfully academic or statistic-oriented--stay with the former and skip the latter, I say. But, don't skip the footnotes or you might miss the story about the gang-fight with revolutionary Marxists. And if you're just looking for a little pick-me-up, read the introduction.

Coming back to the nitty gritty of actually working with people rather than just reading about people working with each other: I can't say enough good things about Creating a Life Together. Ok, so there are gardening implements and a colorful quilt on the cover, and the subtitle refers to “ecovillages” instead of "land projects," but stay with me here. Even if it was written for yuppie liberal do-gooders, even if there are cringe-worthy references to "Native American-style process," and even even if there is a glaring and sometimes offensive lack of class analysis, just skip or ignore all that stuff. Really, I liked chapters 6 and 17 so much that I reprinted them in zine form. Chapter 6, "Power, Decision-making and Governance," outlines voting, consensus, and their variants. Also covered are the various types of "pseudo consensus," which I appreciated most of all. I won't ruin the surprise, but apparently endless meetings and strong-arming aren't part of "real" consensus. What?! The author also highly recommends formal consensus training, the bane of "don't tell me what to do" anarchists.

The chapters on vetting people and handling conflict directly reference the types of conflict brought up in Come Hell or High Water but without the rantiness. And while Creating a Life concludes that there are some people who you just can't heal as a community, it then offers methods for finding the causes of personality conflicts and ideas for dealing with them beyond ostracism 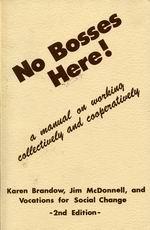 and organizational collapse. And, no, she isn't all roses and dumpstered chocolate about everything--most anyone will be able to identify with some of the "Seven Kinds of Community Conflict We Wish We'd Left Behind" and "Twenty-four Common Sources of Community Conflict.” While not specifically answering “why does the co-op suck,” Creating a Life Together may aid in identifying and breaking down the interpersonal conflicts in the collective house, or the worker-owned bookstore, even in the nuclear family or band. And it does so lacking the resigned fatalism so easy to adopt after enough experiences of group dysfunction.

Admittedly, I haven’t read No Bosses Here in a while, but as far as a quick and not-so-dirty manual for folks starting worker-owned co-ops, it’s a classic. On top of logistical how-tos on collective process, starting and running collective business, the authors dedicate plenty of space to interpersonal dynamics. I appreciated their “types of conflict”-something along the lines of “simple conflict” (tony didn’t do the bookkeeping), “values conflict” (you disagree with tony about the importance of bookkeeping), and “personality conflict” (you don’t like tony). The section on race, class, and gender dynamics is as comprehensive as two paragraphs can be-it’s a short book, after all. No Bosses Here! is also a sort of period piece, written, similarly to Co-ops, Communes, and Collectives, on the heels of the co-op explosion of the '60s and '70s, and often referencing the countless co-ops and collectives extant in Boston at the time.