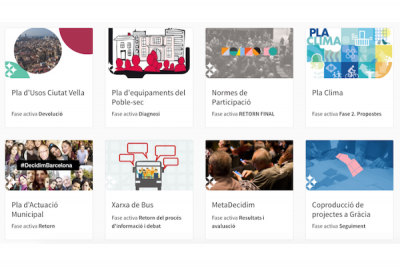 The word Decidim translated from Catalan means we decide, and it's the name of Barcelona's digital infrastructure for participatory democracy. One part functional database and one part political statement, organizers say Decidim is key to a broad digital transformation that is taking place in Barcelona — its institutions, markets, and economy. Organized by the Barcelona City Council, Barcelona's citizens participate in a new digital commons, and its organizers hope that technology can improve democratic participation and foster good government. The open-source platform allows the public to participate directly in government as they would a form of social media, and they have had early success. The city council hosted several organizing events to decide on a strategic plan, and nearly 40,000 people and 1,500 organizations contributed 10,000 suggestions.

Decidim was born when a young protest movement in Spain swept into power, according to Xabier Barandiaran, a project leader, who compares the fledgling political party to the Occupy movement in the U.S. Its leadership's first goal was to create a platform for open strategic planning for the city. "People were in the streets and saying let’s participate in democracy, let's write a strategic plan," Barandiaran said.

What developed was an open-source software that embodied the group's transformation plan, a digital common where citizens can have a say in government — the code is available on Github. "We decided how we would decide," he said. The leadership is still hosting public meetings once a month as well as large conferences — the next one is on September 26-28. I spoke with Barandiaran about Decidim and its origins. Here's an excerpt from our conversation.

Kevin Stark: What was the context in which Decidim was born?

Xabier Barandiaran: It started in Barcelona and Madrid because there was a change of government that resulted from the indignados movement [sometimes called the 15-M Movement or anti-austerity movement], which was connected to the Occupy movement in the U.S. — for your American readers to make a connection. The political movement became a political party and then institutionalized. There was a change in politics that was motivated by a change in society and its mindset, and on the demands of the people.

It was really targeted towards politicians. And among these demands, perhaps, the most important one was to open-up democracy. Not to let it in the hands of the political parties and the establishment. So, once these new political parties or movements went into power in different cities in Spain — particularly Barcelona and Madrid — one of the earliest projects was to enhance all the means for participatory democracy, including the potential of technology to speed up and make possible a more complex participation.

I live in the city of Chicago. In my neighborhood, we have participatory budgeting — once a year my neighbors gather to decide what roads will be paved, street lights installed, or where we want to paint a mural. What is the Decidim vision of participatory democracy? What sort of change is made possible through the digital platform?

Budgeting is one part of participatory democracy but there are many others. Decidim makes possible almost all of them. It is only limited right now because we are still developing the software and new features are coming out every week. We have learned a lot. We have gathered collective intelligence from different expert citizens. All hackers, public servants, academics, people interested in their government. We run workshops and open citizen meetings. We came out with a wider spectrum of possibilities for participatory democracy, other than participatory budgeting. There are budgeting pilots in Barcelona. But we did not put all our eggs in that basket. We felt it was more important to identify the problems, to bring people together to speak about public services.

Everybody understands the potential of social networks. Often for silly things. Mostly for kittens and fancy photos and things. The potential for open knowledge like Wikipedia, or information spreading like Twitter, or intense relationships like Facebook, also applies to politics. But it does so with high controversy (post-truth, lack of privacy, democratic deficit, no-transparency, etc.). With Decidim we talk about a new generation of political networks that are oriented to decision making, commitment, and accountability. This new generation of social or political networks has to be open source, guarantee personal privacy and public transparency, sovereignty of the infrastructures, independence from private corporations and they have to enforce, by design, digital rights and equity. This is what Decidim provides.

Decidim is open-source software. But that's not the only way the software is democratic. Decisions about the software are made democratically — it was built democratically. But there must be barriers for people who don’t have access or technological experience. How do you address that?

This is a very common worry. But the digital divide is no bigger than other barriers or gaps. Like the precariousness gap — people don’t have time to show up to a meeting, or they are have to combine different low paid jobs and are too busy to participate. The cultural gap, people need sufficient information and knowledge so that people can think of better policies. Or the gender gap – women are excluded from public participation. There are many gaps and the digital gap is the smallest of all the gaps.

Democracy needs an update 200 years after its original design during the French Revolution.

It turns out that, with Decidim platform, we can close or reduce the impact of some of the other gaps (improve available information, flexible participation, gender imbalances, etc.). This being said, we take the digital divide very seriously and we have two programs that are important to us. One is the digital mediation program that we are launching soon so that citizens can get direct help at any library or civic centers to access the platform. We also have a training program. We have run some pilots, and we will have training workshops throughout the city next year to train and empower people of the potential of digital technologies for self-organization, democratic participation, data privacy protection, and digital rights.

There's a video circulating online of you discussing Decidim in which you say that representative democracy is in crisis and "the political system that hasn't changed in 200 years. Youth were living in a precarious situation and change had to happen." What was the experience of being a young person in Barcelona and how Decidim is addressing issues?

We suffered (and we are still suffering) an economic crisis, but it is also, and perhaps more importantly, a political crisis. It was easy to see that it was coming. There was a lot of speculation of housing, and a very suspicious collaboration between political parties and the banks. Many of us could see it coming. It was going to explode. There was a big gap between the rich and the poor and that could only be filled with debt, but debt has a limit. There are physical limits in terms of time (you can't pay a mortgage for more than 50 years) and the kind of jobs that were created where far from sustainable. It is regular people who paid for the foreseeable catastrophe and the existing democracy did not protect their basic rights. It was a failure of democracy altogether.

Hundreds of thousands of people joined the 15M protests all across the country, we had very specific demands and proposals to change politics, economy and society but the government failed to listen and to open the doors to public participation against the crisis. There was a generational change challenging the establishment and no means to channel the transition. There is a serious structural problem behind. Voting every four years is clearly not enough.

Democracy needs an update 200 years after its original design during the French Revolution. Moreover, while socio-technical innovations are disrupting our societies continuously (AirBnB rising the housing prices even higher, Google delivering free-of-charge services in exchange of our privacy, etc.), public institutions and political democracy was being left behind, creating an even greater democratic deficit on our societies. This is the situation that Decidim is progressively changing. This is what is new in Barcelona (and other cities like Madrid, Zaragoza, a Corunha): People can channel their collective intelligence into public administration, policy making and politics, We can propose, decide and monitor public policies with flexibility, with a fluid online-offline interaction, from our mobiles or from our neighborhood meeting.

But there is more to this story on the global landscape. We inherited the legacy of the Smart City. Barcelona hosts the Smart City Expo and it is ranked among the three smartest cities in different international rankings. We found a profound weakness of Democracy and public institutions on this project: big tech corporations are taking city data and shaping our city life with private algorithms. This is a form of algorithmic governance that was progressively capturing the public sphere. There are two fundamental problems with this.

First, people, not machines, know much better how to solve their daily life problems, the only unsolved problem is to coordinate the potential of the collective intelligence of 1.5 million people. Second, a smart device can optimize a solution, but cannot define what is a problem to be solved, or fix the goal. The vision of our city is not something a machine or a corporation can do, it is something we need to build democratically. Decidim, as a platform for collective intelligence, is here to challenge this legacy and solve these problems, to show that Democracy is smart. And we are doing so with the people, designing, testing and programming the software in an open and collaborative manner. We use Decidim to design Decidim. We call this community process MetaDecidim, and everybody is welcome to join and share.

This Q&A was updated on Sept. 6, 2017, with clarifications from Xabier Barandiaran.

What Barcelona’s Social and Solidarity Economy Means for NYC