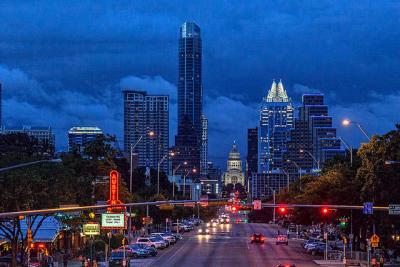 Uber and Lyft are back in Austin, Texas. Both ride-hailing giants left the city last May to protest the passage of a controversial law that among other things, required fingerprint background checks of drivers who worked for transportation network companies. This May, Texas Governor Greg Abbott signed a bill into law that essentially nullified those rules, ending Uber and Lyft's hiatus.

This sudden u-turn presents a conundrum for alternative — and ethical — ride-hailing options that filled the vacuum in the absence of Uber and Lyft like the nonprofit RideAustin. The service boasts that it is designed "from the beginning to be for the community by the community." The app has a feature that enables riders to round up what they owe for their ride to the closest dollar, which is then passed on to the local nonprofits. RideAustin claims that it has raised more than quarter million dollars for local causes. Yet the group has already seen a dip in ridership after the latest law went into effect.

Just in the first week, RideAustin saw a 55 percent decrease in ridership after Uber and Lyft came back to Austin, compared to the week before. "It's especially problematic because the transportation network companies did a referendum that required a vote by Austinites, and they lost," says Austin's Mayor Pro Tem Kathie Tovo. "For the legislators of Texas to override the voters of Austin is extremely concerning."

That’s the bad news. The good news is that it opens up an opportunity for cities to take the lead on setting the agenda on how they want to deal with so-called sharing economy services, especially ones that are prone to breaking or disregarding laws. Texas' latest ride-hailing law was clearly designed to end-run Austin’s ordinance. State lawmakers announced plans to override the city's rules merely hours after the referendum, the Associated Press reported.

"What today really is is a celebration of freedom and free enterprise. This is freedom for every Texan — especially those who live in the Austin area — to be able to choose the provider of their choice as it concerns transportation," the Texas Tribune quoted Gov. Abbott as saying.

The governor's comment implies that Austin’s regulations were stifling. But that simply isn't true. The ride-hailing companies that wanted to adhere Austin's laws did — and thrived. Uber and Lyft left the city of their own accord, without much regard for their users.

In October 2016, the ATX Coop Taxi service launched after raising more than $425,000 in ownership shares from over 360 cooperative members — which made it the third largest worker cooperative in the U.S., according to Waging Nonviolence. ATX Coop Taxi started off with just 25 drivers and reportedly had more than 500 drivers within a couple of months. The cooperative now has an iOS app.

But it's still too soon to know how ATX Coop Taxi and RideAustin will fare against the re-entry of the big players like Uber and Lyft. It could be that Uber's ongoing missteps by its executives and its "don't ask permission, ask for forgiveness later" strategy lies in such stark contrast to the community-focused missions of these two services that Austin residents may naturally shift to these services in the long term.

What this saga has clearly illustrated is the tension that we will likely continue to see in the coming years. As city populations rapidly grow, they are likely to butt heads with state and federal agencies that don't share similar political agendas. Take for example how cities have responded to climate change regulations. After the White House withdrew the U.S. from the Paris Agreement, more than 7,400 cities across the world publicly committed to uphold the deal, The Guardian reported.

A key strategy moving forward will be for cities to work with each other. When asked about how Austin city officials are reacting to Texas's law, Tovo said that they will continue to do what they have already been doing — forge bonds with cities across Texas. Whether or not they agree on various policy matters, many places in the state still believe in local governance, and Austin will help continue to expand and strengthen this network, she says.

This kind of multi-city collaboration to address issues around so-called sharing economy services like ride hailing is already happening elsewhere. ShareNL, an organization based in the Netherlands, created the Sharing City platform for Dutch cities to share information and experiences on how they can manage and regulate these services in ways that maximize community benefits. The Sharing Cities Alliance, also facilitated by shareNL, does this on a global scale. It connects cities across multiple continents, including Seoul, Milan, Quito, and even Dallas, to collaborate on model policies and help them deal with issues surrounding the sharing economy.

People who use ride hailing services, either as riders or drivers, also have a powerful role to play in ensuring that services that put community first continue to flourish. Our time and money are better spent in supporting enterprises that truly care about the communities where they operate.

Meanwhile, back in Austin, the alternative ride-hailing companies are now focusing on growing their ridership again. "When RideAustin was founded, the belief was that if we do something that's hyperlocal, different, gives back to the community, we thought that Austin could support a 20-25 percent percent market share player like this even with Uber and Lyft being back in the mix," RideAustin's chief operating officer Marisa Goldenberg says. "Riders still choose us because of what we stand for — the fact that we're built local for the Austin community."

Maira Sutton is the Campaign Organizer at Shareable, working on campaigns for the international Sharing Cities Network and building our online advocacy projects. She was formerly at the Electronic Frontier Foundation (EFF) for over four years as their Global Policy Analyst, where she monitored and advocated for digital rights around emerging tech policy and their impact on access to knowledge, privacy, and free expression. She was one of the leading activists following the Trans-Pacific Partnership trade negotiations and its effects on users, scholars, creators, and innovators. Prior to joining EFF, she was a paralegal and legal researcher at a law firm in Los Angeles that specialized in fighting redevelopment, eminent domain, and unfair government practices.

She earned her BA at UC Santa Cruz in Politics and Global Information and Social Enterprise Studies. At UCSC she was a Fellow and Coordinator for the Everett Program, which trains undergraduate students to become enterprising tech-literate activists for local to global social justice causes. In 2008, Maira lived and worked in Kuala Lumpur, Malaysia, as a legal researcher and tech intern with Sisters in Islam, a Muslim feminist organization.