The Ideas That Are Lying Around

The COVID-19 pandemic is exposing the cracks in our system, and bringing home to a lot of people how fragile and irrational our status quo economy really is. I have a feeling that in the future I will receive far fewer puzzled looks when I say things like,

"If the level of one's wages were dependent on one's value to society, janitors, sanitation workers, housekeepers, laundry workers, and personal care assistants would be the highest paid professions in our society, not tech company CEOs."

And we can add to that list grocery workers, truck drivers, medical providers, and a whole host of others. Suddenly everyone understands what the essential jobs in our economy actually are. I wish it didn’t take a pandemic for what should be an obvious truth to become common sense, but at least it seems to be sinking in now.

Yet, at the same time that our "essential workers" are displaying their absolute indispensability for one and all to see, many remain among the lowest paid members of our society. This all but guarantees they will also be among the hardest hit financially by the crisis, as already thin budgets are stretched even further with little-to-nothing in the way of savings to cushion the blow. The government may be sending out $1200 checks, but if history is any guide it will be too little and too late for most.

And while even the Financial Times has seen the light (at least partially) and called for amends to be made to low-wage “essential” workers, I greatly fear that all of this new found appreciation will evaporate like a morning fog once the pandemic disruptions subside. Recognizing that the janitor, the CNA, and the laundry worker do more important work than most anything done in an office may be the epiphany du jour, but it’s a realization that comes with a cognitive reordering of the social hierarchy that many will likely find difficult to swallow in the long term. We’ll see.

Besides the irrationality and injustice of our wage scale, we’re also seeing the fragility of our globe-spanning supply chains. Having been led down the garden path by promises of “comparative advantage” and the wonders of “free trade,” we are now being made painfully aware of the real downsides these policies have created. We have become dependent on a hugely complex system to provide even the most basic necessities of life, placing ourselves at the mercy of events, people, and organizations far outside of our control. Even small disruptions at any point in this system have the potential to cascade throughout the whole, becoming major collapses, but when the whole of the system is shocked at once, well…it almost seems a miracle that things haven’t gotten any worse than they have. I live in an agricultural area and even here, if the semis delivering food didn’t show up for a week or two things could get real interesting, real fast.

Meanwhile, the response from those in positions of power in Washington has been entirely in keeping with their normal behavior, i.e. pandering to the interests of the wealthy while throwing a few scraps to the masses. Hence, we get this priceless graphic from Jim Cramer’s Mad Money show: 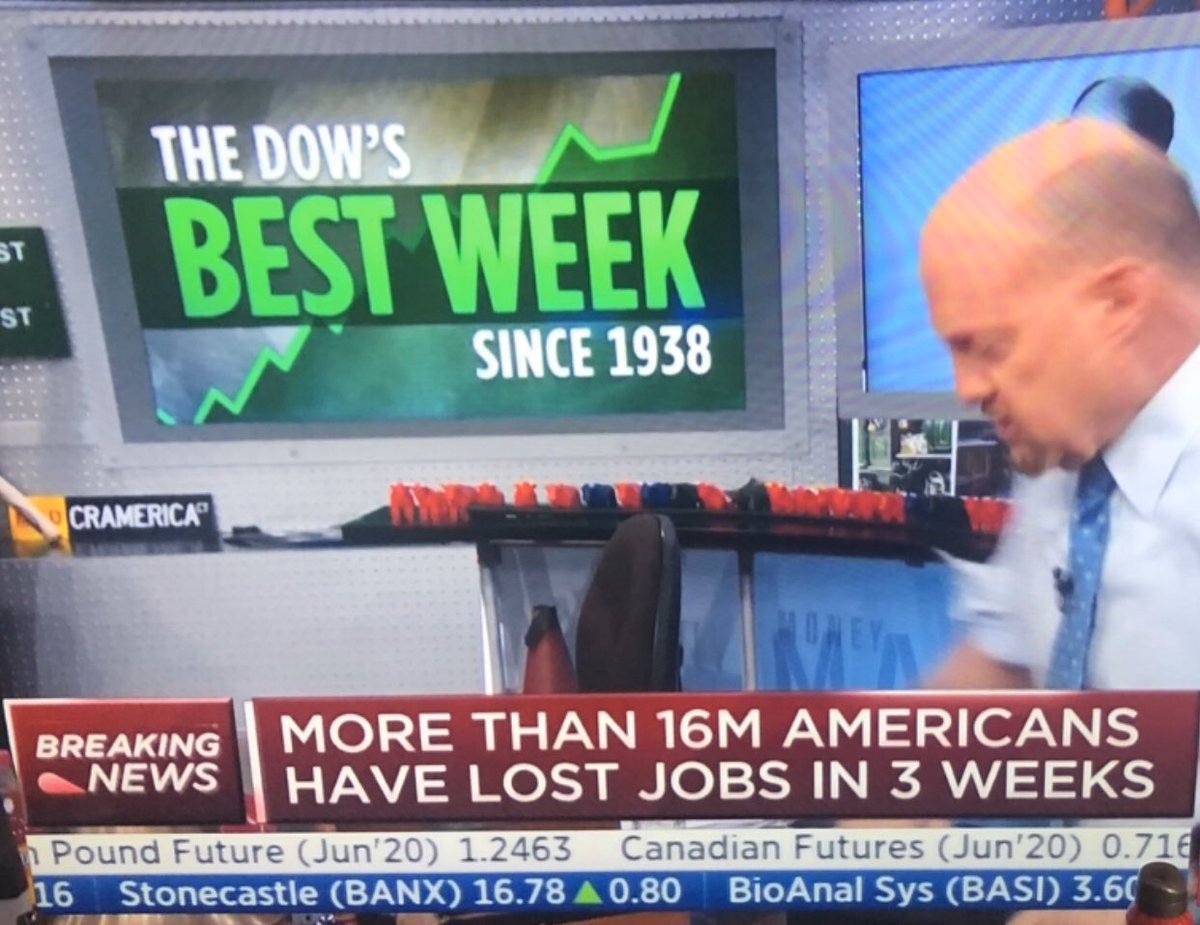 If that doesn’t perfectly sum up the irrationality of the status quo economic system, I don’t know what does.

“Only a crisis - actual or perceived - produces real change. When that crisis occurs, the actions that are taken depend on the ideas that are lying around.”

If we’re going to salvage a silver lining from this pandemic, rather than just allow it to exacerbate the already existing problems in our society, I think we will need to change some of our habitual ways of thinking. First and foremost, this means the value we place on different types of labor.

Right now, wages in society at large, as well as within much of the worker co-op movement, tend to be based around one’s position in the decision-making hierarchy. This needs to change. Can we really argue that the CEO who can work safely from home deserves more pay than the "front line" workers exposing themselves to infection while stocking groceries, providing home care, or doing laundry for the hospital? Should pay levels really be determined by formal education or the scarcity of a particular skillset, when it is jobs that don’t require degrees and which many can do that are, as is now be apparent, the most fundamental and also the most dangerous ones in society? Maybe, just maybe, jobs that are essential for the basic functioning of a society or a business should be rewarded by the wage distribution, instead of punished by it, especially when those jobs entail exposure to health and safety risks.

Secondly, we need to think collectively about what the necessities of life actually are, and get to work on creating ways to provide those things on a local level. Localization, not gloablization, needs to be the future of our economic development.

While it is difficult to contemplate local production of much that we now think of as necessary, one essential that we can start localizing immediately is food production. This already seems to be happening as many people have developed a sudden interest in gardening, with the specter of empty grocery store shelves supplying ample motivation for picking up a new hobby. All efforts in this direction should be encouraged and supported, from individual gardens – or even just potted plants – to community gardens, farm co-ops and CSAs. Local food sovereignty and security is going to be much less of a niche concern moving forward, and cooperators have much to contribute to these efforts.

Finally, it is a near certainty that our economy for the next several years is going to be one in which finances are extremely tight for individuals, households, and businesses alike, to put it mildly. Of course, in a lot of our communities money has always been scarce, but it will be even more so now. Given this scenario, it seems like a good idea to be thinking hard right now about how we can meet our collective needs without the necessity of money changing hands.  Endeavors that combine cooperative structure with time-banking practices – like this babysitting co-op, and this home weatherization co-op – will have heightened relevance in the depressed economy we appear to be quickly heading into.

And we will need to be especially creative in our design of these projects to account for the new reality we find ourselves in, where things like social distancing may not just be a passing fad. Fortunately, we’re a creative bunch.

These are the ideas that I’d like to point out are already lying around, as Milton put it, in hopes that they may spur actions that will make the world we’re heading into better than the one we’re quickly leaving behind. If you have some other ideas that you would like to leave lying around, I encourage you to put them in the comments below.

Stay safe out there, everyone.

Would love to share this with my Transition group. Great article!

In reply to Would love to share this… by Sue VanDerzee

Please feel free to share it. Glad you got something from it.

Returning to the Essence of Neighborhood