Stop the Economic War Against Cuba!

Support the Days of Action September 11-16 in Washington, DC

For nearly 60 years, the United States government has waged economic war against Cuba, causing untold suffering, death and starvation of thousands of the Cuban people with its many-pronged blockade and terrorist paramilitary operations against the socialist island.  These actions have made it difficult or impossible for the country to import food, medical supplies, technology, and other goods and services. 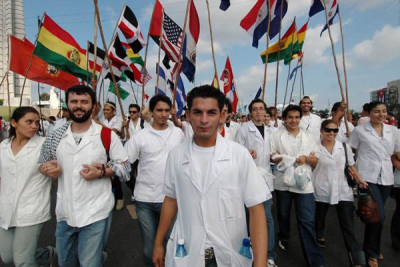 Today, more Americans are seeing through the U.S. lies about Cuba and are taking a stand against genocide by their government by organizing “actions” in support of the Cuban people. The Third Days of Action Against the Cuban Blockade will take place in Washington, DC on September 11-16 to galvanize the American people and their government to end the blockade, a series of laws designed to try to bring Cuba to its knees and to force the people to rise up against the late Cuban leader Fidel Castro.  Organized by the International Committee for Peace, Justice and Dignity (International Committee), a major focus of the activities is healthcare.

"In this time of intensified concerns about the health care crisis in the U.S., what we hope to get from the ‘3rd Days of Action Against the Blockade’ is an increased awareness of how the U.S. blockade against Cuba not only inhumanely hurts the people of Cuba, but also hurts the people of the U.S.,” said Netfa Freeman, a policy analyst at the D.C.-based Institute for Policy Studies, as well as an organizer for the International Committee.

Freeman said that Americans, too, suffer from the U.S.-imposed Cuban blockade because they are unable to benefit from the “numerous and unprecedented breakthroughs that [Cuba] has made regarding health care, which it is more than willing to share.”

“We hope to get the emergent movement, now resisting the age and implications of a Trump administration, to embrace the cause of ending the U.S. Blockade of Cuba and to help build the massive social justice movement it will take to accomplish that. We hope to impress upon any members of the U.S. Congress open to hearing about these issues to take a stand and take action to end, once and for all, the illegal and immoral blockade."

Indeed, the head of the Senate Finance Committee has recently done just that.

On August 1st, Sen. Ron Wyden, (D-OR) introduced the U.S.-Cuba Trade Act of 2017 to repeal the blockade. This is a step in the right direction for the people of Cuba, even though it was made not out of humanitarian concern, but to advance U.S. commercial interests in Cuba.

“It is well past time for the United States to abandon the failed policy of trying to isolate Cuba,” Wyden said. “Decades of experience have proven the embargo will never improve the lives of the Cuban people. Instead, this policy only serves to shut U.S. exporters out of a natural market for American agricultural and manufactured goods.”

But regardless of intentions to benefit American business, Wyden’s sponsoring legislation is a step in the right direction for the Cuban people.

Local governments are also passing resolutions supporting an end to the blockade in response to grassroots efforts. Cities like Brookline, Mass.; Pittsburgh, Penn.; Oakland, Berkeley, and Richmond, California have passed resolutions in support of the Cuban people and/or lifting the blockade, according to Witness for Peace, a national grassroots organization committed to peace, justice and sustainable policies in the Americas.

In the document "Report by Cuba," which it published in June 2015 for the United Nations, the Cuban government estimates that the trade blockade has cost Cuba $833 billion over the entire length of the blockade. [1]  The document details how the blockade hurt Cuba for one year from April 2015 to April 2016. This was following President Obama’s overtures about relaxing the blockade.

The effects of the blockade, detailed by the report, range from the ridiculous to the tragic and downright barbaric. According to the report:

The Report states that the blockade has had “genocidal” effects and has caused monetary repercussions of $2.5 billion since the blockade.

In addition to the inability to get parts of diagnostic and treatment equipment, Cuba cannot purchase instruments and products, and drugs like botulinum toxin -- used to treat more than 50 diseases -- directly from the U.S.  To get the drug, Cuba must purchase it from other countries, raising the cost per purchase by $200-500.

“It is time to end the blockade and treat Cuba as a neighbor.” ~Dr. Margaret Flowers

Alicia Jrapko, U.S. coordinator of the International Committee, said that “the impact caused by the blockade at the human level is hard to quantify and, in the case of children, is not only hard but painful.”

One example is the lack of access to artificial kidney machines and their components from U.S. markets to perform dialysis, something that affect adults as well as children.  Another example is a unique medical test made in the U.S. that detects birth defects in pregnant women over 38 years old. While this test is a normal part of prenatal care in the U.S.,  pregnant Cuban women in that age group have no way knowing if their child faces birth defects.

Yet another example, according to Jrapko, is an effective anti-viral medication that is widely used to treat children born with AIDS. Cuba’s internationally known Pedro Kouri Tropical Medicine Institute cannot obtain the necessary license from the U.S. Treasury Department to import this medication, so Cuban children go without.

But the blockade hurts not only Cuban people, Americans also suffer and die needlessly.

Cuba’s biotech industry has developed CIMAvax, a drug that helps lung cancer victims live for months, even years. The blockade makes it difficult for people like Judy Ingels, 74, of California and Mick Phillips, 68, of Wisconsin, and who sneak into the island to get CIMAvax, a drug developed by Cuba’s biotech industry.   The drug is part of immunotherapy and triggers the body’s self -defense. Patients must take the drug 1 or 2 months.  The drug is being sold to people in Canada, Latin America and other places.

Some of the other innovations that Cuba has developed include meningitis-B and hepatitis-B vaccines, streptokinase for dissolving blood clots, a skin growth factor for treating burns, and diagnostic equipment to screen infants for various conditions, Jrapko said.

A Baltimore activist doctor will speak at the D.C. event.

“We have a lot to learn from our brothers and sisters in Cuba about creating a healthcare system that has as its basic premises treating health care as a human right, not a commodity, and improving the health of its population,” said Margaret Flowers, a Baltimore pediatrician and director of the Health Over Profit for Everyone (HOPE) campaign, who will be participating in the Days of Action. “It is time to end the blockade and treat Cuba as a neighbor.”

For more information, visit the Days of Action website.

[1]  According to the Report, this amount takes into consideration the depreciation of the dollar in regards to the price of gold on the international market, in spite of the reduced price of gold.  At current price, the blockade has caused damages of over $121.192 billion.