On Solidarity and Autonomy

In this essay, I will reflect on my experiences with autonomy and solidarity in the autonomous Zapatista caracol of Oventik and the ways I hope to practically create spaces of collective autonomy in the United States. 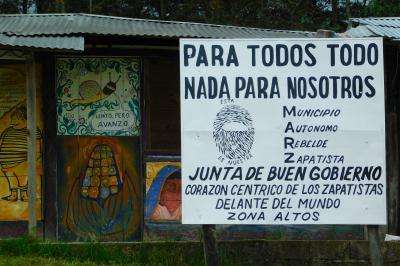 In Hilary Klein’s Compañeras, A Zapatista woman says, “Compañerismo and unity. [Compañerismo is the solidarity that comes from being compañeros.] We have also found respect between men and women. Our struggle is our liberation because it gave us the courage to participate and defend our rights.” Only through this struggle in collectivity, are individuals able to be in solidarity with one another. As expressed by Marx, the struggle changes the individual into a subject of revolution, one able to relate to others in a different, subversive, anti-capitalist manners (Callinicos, The Revolutionary Ideas of Karl Marx).  So what happens when people are not a part of a transformative struggle? Are they still able to be in solidarity with others? Are they still in the liberation process?

At Oventik, our first three weeks at el Centro de Lenguas overlapped with that of a German collective, which included two migrant Indigenous women from Bolivia and Chile. Their trip was riddled with poor planning and misinformation, the lack of an actual ‘collective,’ and racism towards the two migrant women.  This interaction showed us that although people may be on their path to find the liberation process and transformative struggle, this does not mean that one is automatically a compa or in solidarity. One thing that stood out to me from our conversations with one of the migrant women is that she would repeatedly say, “I told them to stop calling me compañera. We are not compañeras. You don’t trust me. Don’t call me compañera.” Trust is an integral part building that solidarity and radical, anti-capitalist social relations. Although traditionally labor has been a process through which people socially relate, under capitalism, only when objects/commodities are being exchanged does this social relation happen. Where does that leave trust? How can I trust someone I know only through delicate relations of exchange riddled with competition and antagonisms? Under capitalism, trust is a difficult thing to attain.

I wonder as well if exploitation and that “struggle” shared experience facilitate trust. In Compañeras, we see that the exploitation and oppression of those severely marginalized create conditions that facilitate solidarity and trust. In some cases, it is the only hope for survival. In others, it is better than the existing alternative of continual exploitation. Klein says, “Chiapas has one of the largest indigenous populations in Mexico, and some of the highest rates of malnutrition, maternal mortality, and illiteracy. All these indicators of marginalization are highest in eastern Chiapas, where the indigenous population is most concentrated.” Neo-Zapatistas are one of the most marginalized populations in the nation-state; options of existence are limited, if not non-existent. As Klein says, “They were dying anyway, they say, from hunger and curable diseases—so they were willing to risk a quick death from a bullet for the chance of a better future for their children.” In such conditions, it is extremely difficult not to trust compas. Not only that, but the analysis of life experience within systematic oppression and exploitation provides the groundwork for anti-capitalist, genuine social relations. But if your life experience has not lead you to a critique of systemic oppression and experience, if you are only guided by theoretical principles, if you don’t have a struggle you call your own from which you can begin to transform yourself, how can you be in solidarity with another? From what I have seen and read, I think that even if you have the best intentions in your heart, good intentions are not enough to transform a person who has lived all their life in this capitalist, white supremacist, patriarchal, colonialist superstructure. Thus, the question is now, how can we awaken transformative, anti-capitalist solidarity in people who have the desire to join the struggle?

...if you don’t have a struggle you call your own from which you can begin to transform yourself, how can you be in solidarity with another?

At Oventik, I learned that everyone is in a process of learning. Oventik has an autonomous secondary school, the Good Government Board, an autonomous health clinic, a cooperative bootmaking shop, and women’s artisanal coops. Not only are Zapatistas trying out different forms of governance, but alternative education, health care, and economic systems (Klein). Mandar obedeciendo; leading by obeying. This is how the autonomous governments of Zapatista communities govern. Seeing this with my own eyes has inspired many ideas on how to create spaces of autonomy in the United States.

One of the ideas that has excited me the most is that beginning a community garden in my hometown. My first year of college, I visited a community garden in Springfield, MA. I thought it was pretty cool, but did not realize the radical potential of such a space in that moment. Now, I reflect on and consider the context of my hometown, Greensboro, NC, a town with food deserts, limited access to fresh homegrown veggies, and radical revolutionary roots. A few days ago, I reluctantly called my father and asked him what he thought of the idea of helping me start a community garden. My parents have been less than excited about my involvement with social justice movements. Surprisingly, he thought it was a good idea and told me he knew a friend of his that might be interested in being involved in such a project. A community garden, something so simple, is a space of autonomy and self-sufficiency, of resistance and subverting capitalist relations.

Kali Akuno, director of Cooperation Jackson in Jackson, Miss., and an organizer with the Malcolm X Grassroots Movement, said in a talk on campus last February: “We have to work in an Ungovernable Framework. We are building and fighting at the same time. We need institutions that let us live autonomously beyond a monetized economy.” Cooperation Jackson is dedicated to building a network of interconnected yet independent institutions like a cooperative bank, a training center, and a federation of establish cooperatives in Jackson, Mississippi. These organizations are creating alternatives to replace existing exploitative socio-economic systems. I believe that something like Cooperation Jackson, like the autonomous secondary school, something like autonomy is possible in Greensboro. Perhaps turnips and eggplants do have radical, transformative potential.

Valeria Sosa Garnica is currently a junior at Williams College. She is a political science and American studies double major. She hopes to pursue a life of cooperative resistance, community organizing, and anti-capitalist joy.