Though the numbers aren’t yet in, 2016 appears to have been a banner year for progressive non-profits, particularly in the wake of the presidential election. Many celebrities, artists, and other influencers publicly supported organizations like the American Civil Liberties Union and Planned Parenthood, and pledged portions of their profits to these organizations. Some of the United States’ best-known non-profits raised massive amounts of money in a matter of days as a result of this desire for solidarity. Earlier in the year many were moved to give after seeing indigenous water protectors in North Dakota blasted with fire hoses and tear gas as well as the targeting of LGBT people and Black men in Orlando, Baton Rouge, and St. Paul. Individuals and businesses in solidarity with the water protectors, queer communities, and Black Lives Matter movement gave millions of dollars to support the Standing Rock camps, demonstrations, bail funds, and more.

It’s fitting that credit unions and cooperatives would join in this new wave of social giving in the spirit of the seventh cooperative principle, concern for community. Co-ops have long heeded the charge to invest in and nurture the local community by providing for their material and financial needs. Now, some are encouraging members to give or allocating funds to a cause that would typically go to the cooperative or union.

I spoke with a Deyanira Del Rio, Board Chair of the Lower East Side People’s Credit Union (LES People’s), about her organization’s decision to do just that last month.

EWL: What prompted the decision to issue a statement of solidarity with the Standing Rock water protectors? 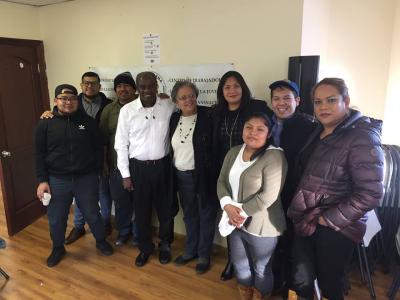 DD: Our credit union is rooted in Latino and immigrant communities, and in the wake of the November election we started hearing concerns from some members about the safety of their accounts and their personal information. We decided to put out a statement assuring our members and partner groups that their accounts and privacy are safe with us and that we will continue to pursue our economic justice mission. It felt important to take a public stand given all of the fear and uncertainty about what's ahead. At the same time, we saw that Syracuse’s Cooperative Federal Credit Union decided to donate new member fees in December to Standing Rock, and it inspired us to do something similar for La Colmena, a Staten Island worker center that organizes day laborers. Giving to La Colmena was a show of solidarity.

EWL: I’m curious about the data safety issue. What were members’ concerns?

DD: LES People’s serves eligible NYC residents regardless of immigration status. We accept a broad range of identification documents, including consular IDs and foreign passports, as well as New York City's municipal ID card, to open accounts and provide other services. (These IDs are typically available to people both with and without U.S. citizenship.) Our policies fully comply with banking regulations that require us to know our customers. Given the intensified anti-immigrant rhetoric and threats, people understandably are concerned and want to know if they can continue to trust the banking system and if their money is safe.

EWL: How did you choose La Colmena?

DD: The credit union has worked with day laborers on the north shore of Staten Island for several years; La Colmena is one of the few groups working with this constituency. There are growing immigrant populations in Staten Island and not always a lot of infrastructure to support them. Our credit union has been driving our mobile bus branch to the north shore on a weekly basis, and we plan to open a permanent branch in 2017.

EWL: Are you planning any on-going charitable initiatives? 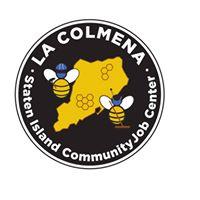 DD: Our credit union is itself a non-profit that runs on a lean budget. All new member fees through the end of December will go to La Colmena. We will know how much we raised early next year, and decide if it's something we want to continue or to replicate.

EWL: What can credit unions serving in areas that don’t have municipal IDs do to serve immigrant communities?

DD: They can make sure that their ID policies aren’t effectively discriminating against immigrants in their communities. Credit unions are required to verify people’s identities, and not their immigration status. Under federal Know Your Customer rules (a part of the Patriot Act), for example, financial institutions must collect a new customer's name, address, date of birth, and an ID number. For U.S. citizens, this ID number is typically a social security number but if the customer is not a U.S. citizen, they may use an IRS-issued individual taxpayer ID number, or the number from any government issued photo ID, including a foreign passport.  Yet many banks and credit unions unnecessarily bar people who do not have a social security number. Beyond ID requirements, credit unions can evaluate their lending policies to make sure they are inclusive of immigrants who may not have lengthy credit histories, for example. And they can strengthen ties with local immigrant-serving organizations such as La Colmena to build understanding and trust.

Dey has been at New Economy Project for 15 years. She has worked at community development credit unions around the United States.