In Praise of the Pines

One simple strategy for supporting the growth of co-ops in the U.S. and Canada is for cooperatives, collectives and their members to use their purchasing power to support the cooperative movement. 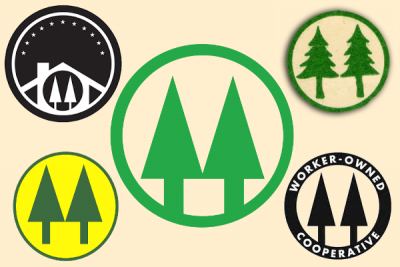 LEARN FROM THE UNION LABEL

Unions have long recognized the impact of their own economic power. "Look for the Union label" became a familiar slogan, and union newsletters and magazines identify union made products for their members to look for. Unions themselves generally strive to purchase union made goods and services when available. The Union Label and Service Trades Department (of the AFL-CIO) was founded in 1909 to promote the products and services produced by Union Workers. "Smart shoppers look for the Union label" not only because they know the label means quality goods and services, but because by shopping they are helping to promote justice on the job.

Recycled products often carry the by now familiar and widely used recycled logo. This has allowed supporters of the environment to easily purchase products that are a good match for their values.

This kind of solidarity and visibility does not currently exist in the democratic economy sector, of which there are numerous different kinds of organizations: worker-owned co-ops, collectives, consumer-owned co-ops and producer-owned co-ops. Together, our purchasing power is substantial. Over 100 million people in the U.S. are members of 47,000 cooperatives (data from the National Cooperative Business Association). Co-op business-to-business purchasing would dramatically increase revenues of co-ops and collectives.

Many members of consumer owned cooperatives are only vaguely aware of their own membership in co-ops. Educational work could be done to place these consumer co-ops (i.e. credit unions, electrical utilities, etc.) within the broader cooperative movement.

A co-op label does exist: the "Twin Pines" symbol adopted in 1922 by the Cooperative League of the USA. Used around the world, it is not well known or used in the US. We need to begin more widespread use of this symbol and education about its meaning could have beneficial results. Currently, it is not easy even for consumers who want to "Buy Co-op" to know when they are buying products made by worker or producer owned businesses.

As cooperatives and collectives put more of a priority on purchasing from one another, they will clearly increase economic support for their own businesses. This intercooperation will also enhance the emerging networks of support.

This article was originally published in GEO vol. 1, issue 44: Democracy within Co-ops;  2001.