The machines are just one part of our story, and this article will talk about encounters between people, tools and knowledge and it will take us to various places: Paris and Renage in France, Pyrgos and Kalentzi in Greece, and Tallinn in Estonia.

Let us begin our journey in Greece. In Pyrgos (southern Crete), there is a small group of people called Melitakes (the Cretan word for ants) interested in seed sovereignty and agroecology. It is a group that cares about organic farming and that tries to form a small cooperative. One of the things the group does is to plant legumes in between olive-trees or grapes. While olive trees are abundant in Greece, the land in between individual trees is usually not cultivated due to the distance necessary to avoid shading and foster the growth of the trees. So the idea was quite simple: use the unused land. However, the members of the group soon faced a specific problem: it’s hard to harvest legumes by hand and there are no available tools to do this arduous job in a narrow line between olive trees. On the market, there are only big tractor accessories, suitable for such a job, and only for large crops. That is why the group sought the help of a friend in a nearby village, a machinist, to help them out. He liked the idea. He saw it as a challenge and started to develop a tool (see picture 1). At that time, there were no concrete ideas or talks of ‘open sourcing’ the tool and of ‘do-it-yourself’ (DIY) practices. The situation was rather a pragmatic one: ‘there is a need for a machine that does not exist in commerce, we need a person to build it… and that’s what we did, supporting that person as much as we could, during the process’. 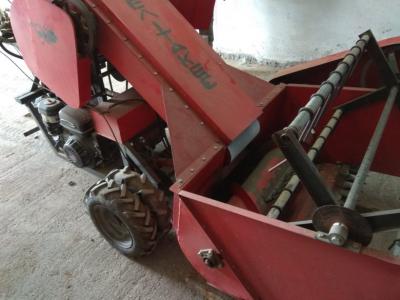 Several weeks later, the two authors of this article met in Paris: Alekos, who knew about his compatriots who built the legume-harvesting machine met Morgan, who knew about l’Atelier Paysan, a French cooperative specialized in the auto-construction of agricultural equipment, based in Renage. Alekos explained his plans: carrying out his PhD at Tallinn University of Technology on convivial technologies, getting to know l’Atelier Paysan, and ‘implementing’ some ideas in Greece through creating a makerspace for building agricultural tools within the framework of an EU funded programme called Phygital. Morgan explained the trajectory of his research on/with l’Atelier Paysan: his involvement in a collaborative project on user innovation since 2015 and his analysis of l’Atelier Paysan through looking at the politics and materialities of open source technologies in agriculture. After their discussion about theoretical approaches, methods, concepts and fieldwork, it was time for Alekos to meet l’Atelier Paysan ‘on the ground’ by participating in a 5-day workshop to build two tools for organic grape crops.

Alekos gained several kinds of knowledge via the workshop. Practical knowledge on working with metals, cutting, and welding. He also gained theoretical knowledge from l’Atelier Paysan: its organizational structure, the problems faced (and how they are solved), the financial setup and how to run workshops (see picture 2). 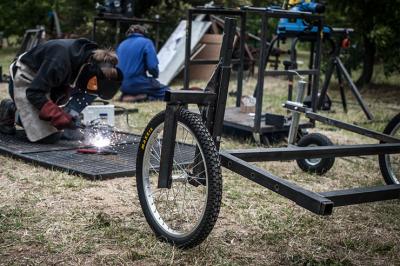 L’Atelier Paysan is one of the few collectives specialized in such activities (other notable collectives being Farmhack and Open Source Ecology). L’Atelier Paysan has developed a range of practices and tools for ‘liberating’ agricultural tools: a website, workshops, a book, video tutorials, and open-source plans. In their recent article, Chance and Meyer (2017) have analyzed l’Atelier Paysan by retracing their history and form of organization, studying how they enact the principles of open source in agriculture, and by describing their tools within their economic and political context.

When Alekos got back in Greece, he visited the Melitakes group again. He explained how l’Atelier Paysan works – its practices, philosophies, and ethics – and the various tools that have been designed and built. While thinking about the future development of Melitakes’ tool and its possible diffusion through some of the standards developed by l’Atelier Paysan, the collective faced a new problem: none of them was a mechanical engineer. None of them thus could draw the design of the components of the legume harvesting tool in situ. Yet this was a crucial step for digitizing the design and making it accessible online. So they sought the help of architects for how to best illustrate each part of the machine. Subsequently, they dismantled the tool, took photos of each component (more than 300 photos in total) in the correct angle (90 degrees) and with a tape measure visible on each photo. They also used big pieces of paper to trace some complicated parts (see picture 3). And they started looking for persons who, based on the pictures and imprints, would be able to (digitally) draw the mechanical design of the tool.

The plan, at the moment of writing this article, is to draw the plans of the tool, open source them by publishing them on the Internet under a Creative Commons type of license and then organize workshops to teach people to build it. So while the full story about the legume-harvesting tool has yet to be written, some features can already be told: a practical problem has been translated into a technical tool; this tool has been disassembled and photographed in order to make it ‘drawable’ and thus available via Internet. The hope, for the future, is that many more people, in many more places, will be able to build this tool, further improve it and share the improved design with the global community. But alongside the tool, something else will travel and be reinforced: the principles of agroecology and the practices of open source. 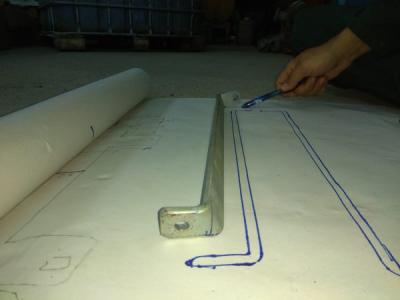 Our second story begins in a village called Kalentzi in Northern Tzoumerka region, Greece. The local community of farmers (called Tzoumakers) had another practical problem: finding an appropriate tool for hammering fencing-poles into the ground. Several tools have been used for this task for ages. But not without its difficulties and dangers: there are farmers who climb ladders and hammer the poles, and others who climb on barrels to do the job. But the combined efforts of hammering the poles into the ground and, at the same time, maintaining one’s balance on the ladder/barrel proves difficult – plus, you need two people to do the job. That is why several local farmers and makers got together, tried to find a solution and set up a plan to build a tool that can do the job without the need for acrobatic moves by making it possible for one person to hammer the poles while standing firmly on the ground (see picture 4).

The next phase, after the current prototyping of the tool, will be the design of a booklet that will include a detailed presentation, an explanation of the usefulness of the tool, a list of all the equipment and material needed, instructions for building the tool (and the risks thereof), drawings and pictures. 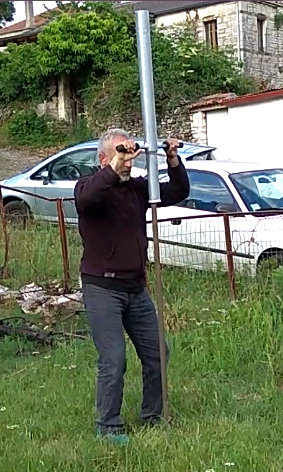 It is time, now, to move back to France and give more details about l’Atelier Paysan. The first tool construction workshops took place in 2009 by a group of innovative organic farmers that was eventually formalized and structured into the cooperative l’Atelier Paysan in 2014. At that time, l’Atelier Paysan had already begun situating its practices theoretically, by mobilizing various vocabularies and concepts (agroecology, open source, social/circular economy, common good, appropriate technologies, etc.) as well as various authors and academics (André Gorz, Jean-Pierre Darré, etc.). Active collaboration with several academics in the social sciences was sought from 2015 onwards.

By that time, l’Atelier Paysan had already perfected its general methodology: doing its TRIPs (Tournées de Recensement d’Innovations Paysannes / Tours to Make an Inventory of Peasant Innovations); developing tools via testing, prototyping, upgrading and realizing workshops; and ‘liberating’ the collectively-validated tools via publishing detailed plans and tutorials on the Internet. One of its most prominent tools is the quick hitch triangle, which replaces the usual three-point linkage between a tractor and the tool to be fixed behind it. For the quick hitch triangle, l’Atelier Paysan has produced a 10-minute video, taken many pictures, issued a 47-page booklet, drawn several plans – all of which are freely available on its webpage (see picture 5). 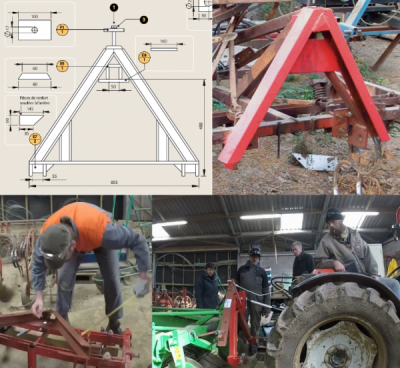 It is important to stress a key feature: it is not l’Atelier Paysan that develops new tools from scratch ‘in house’; rather, they actively look out for individual farmers’ innovations. Only thereafter, through collective construction work, after testing the tool in the field and various processes of representation (plans, pictures, videos), are the tools released. Put differently, while user innovations are already there, ‘in the field’, the role of l’Atelier Paysan is to collect, formalize and disseminate these innovations.

In Greece, the situation is somewhat similar: local peasants already have several ideas in mind for tools that they would like to materialize. The idea is now to continue building tools with the local community, a practice that is usually experienced as positive and empowering. Ideas – like seeds – need fertile ground. Yet, a model like the one from l’Atelier Paysan, cannot simply be copy-pasted to another country and another context unmodified: a thorough understanding of both realities is needed. For example, in Greece, there are no public funding streams available for such endeavors, and the specific plants, soils, and morphologies of the country also call for specific, locally adapted tools. Apart from the political and natural peculiarities, socio-cultural characteristics also differ. For example, farmers’ skills are not the same in Greece than in France, and the collective memory and experience of building cooperatives in Greece is different. The conditions under which people can cooperate have their local ‘flavours’ rooted in habits, perceptions and social imaginaries. Therefore, l’Atelier Paysan’s model can act as an inspirational starting point but needs to be adjusted through continuous local experimentation.

The final leg of our trip brings us back to our respective academic homes (in Paris and Tallinn), to our keyboards to write this article, and to the theorizations that we are currently working on. Our stories have been about the work – and sometimes difficulties – that go into transporting ideas, machines, practices, and knowledge from one site to another. This is not a simple move, it is not just a matter of copy-pasting an idea, a practice or a technology from one place to another. Ideas, practices, and technologies are not immutable objects, but they are, in a sense, ‘quasi-objects’. In order to move ideas and technologies, they need to be transformed, disassembled and reassembled, translated, represented, adjusted. It is only via a variety of interlinked actions – imagining, testing, photographing, drawing, theorizing, sharing, rebuilding – that objects can travel and multiply. For these technological devices to be open, ‘convivial’ and low-tech, they need to be opened up in several ways. Our argument is that this opening up is both a technical practice and a social endeavor. Our stories are thus not only about the practices of open sourcing agricultural tools, but also about the (geo)politics, ethics, aesthetics and collective dimensions thereof.

(Note: the authors of the article would like to thank Luis Felipe Murillo, Evan Fisher, Chris Giotitsas and Vasilis Ntouros for their suggestions and comments. Alekos Pantazis acknowledges financial support from IUT (19-13) and B52 grants of the Estonian Ministry of Education and Research, COST Action CA16121 project and the Phygital project which is funded via the Transnational Cooperation Programme Interreg V-B Balkan – Mediterranean 2014-2020)