Athens, Greece – Experimenting with alternatives to capitalism has continued to become more popular as huge wealth divides devour chances of relieving poverty across the world. During the summer of 2017, a speaking engagement at the self-organized squat of Embros Theater in Athens, Greece, showcased alternatives to capitalism. In the second of our three part series on alternative economies and community currencies, we spotlight Kenya’s Sarafu-Credit.

With community currencies, lower-income communities are given the ability to improve living standards by building infrastructure sustainability through networks of sharing, providing access to interest-free loans, and increasing the economic viability of the community.

This is a major departure from conventional national currencies. Most are generated today through fractional reserve banking, wherein units (“broad money” or M3) are created at the bank when loans are instantiated and destroyed upon repayment. 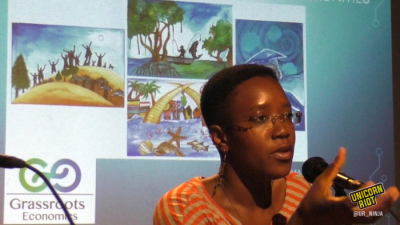 During economic slowdowns including the US Great Depression, the “velocity of money” drops as fractional currency is unavailable. Locally issued “Depression Scrip” substituted for fractional money in the 1930s. Today alternative currencies that improve velocity of money by distributing credit creation power to the whole population are taking root in many countries.

The first speaker of the discussion at Embros Theater was Caroline Dama, a Board member of Grassroots Economics (GE). GE is a “non-profit foundation that seeks to empower marginalized communities to take charge of their own livelihoods and economic future” in Kenya.

Will Ruddick, who started the Eco-Pesa (no longer in circulation), a complementary and community currency, founded Grassroots Economics in 2010, which has created six networks of community currencies that now works with over twenty schools and twelve hundred businesses in Kenya.

In 2013, 200 businesses, 75% of which were owned by women, became part of the new self-organized and self-determined community currency, Bangla-Pesa, in Mombasa’s largest slum, Bangladesh.

Kenya’s government quickly saw the formation of these community currencies as a threat. Five individuals involved with Bangla-Pesa, including Will Ruddick and Caroline Dama, were implicated on charges of undermining the national currency, the shilling. They were all eventually cleared of all charges and the Sarafu-Credit system continues to break new boundaries and change the narrative of alternative economic systems.

Drastic economic and social inequalities run rampant throughout Kenya as at least 46 percent of its population is living in poverty. With basic needs like clean water and healthcare becoming hard to attain, the Sarafu-Credit community currency system was created as a safety net for citizens to improve living conditions. 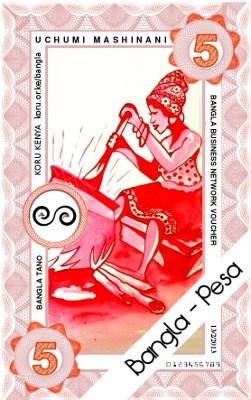 The word sarafu means currency in the Kiswahilli language. Sarafu-Credit is a system of community currencies used as a “regional means of exchange supplementing the national currency system.”

The community in Bangladesh, the biggest slum in Kenya’s second largest city, Mombasa, is very poor and has little access to the shilling, the national currency. Caroline Dama, from GE, stated that the community is “able to come together and come up with a system to exchange our goods and services” using “community dollars.”

These community currencies are complimentary with the national currency and Caroline stated that not all of them work towards abolishing the current currency or system, but that they are “trying to make sure that the community banks have a way to survive in times that they wouldn’t otherwise survive.”

“it’s a form of community governance and self-taxation … the community has been able to come up with its own rules to solve its own problems.” – Caroline 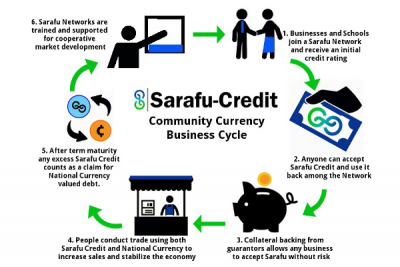 GE explains Sarafu-Credit as: “A network of businesses, schools, self-employed and informal sector workers form a cooperative whose profits and inventory are issued as vouchers for social and environmental services as well as an interest-free credit to community members. These vouchers circulate in the community and can be used at any shop, school, clinic or cooperative businesses and form a stable medium of exchange when the Kenyan Shilling is lacking. This injection of money into the community in the form of a community currency, based on local assets, increases local sales and helps directly develop the local economy. Sarafu-Credit, Grassroots Economics’ Kenyan Community Currency program, creates stable markets based on local development and trust.”

Caroline stated that only with a bottom-up approach can the community create economic equality. “Communities thrive when they are able to make their own decisions.”

“Community currency gives that power to the people because they are talking to each other, they are able to exchange, and now they are meeting their basic needs, they have enough to sell and when they sell they can pool their resources together to build that better school.” – Caroline 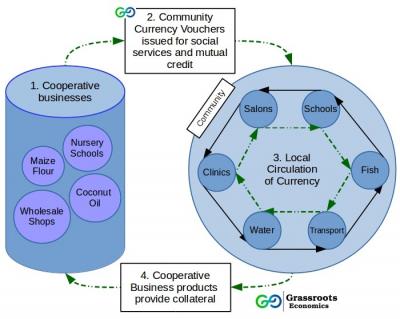 “If we have problems in the society we want to deal with … what we do, is we can come together as businesses instead of waiting for the government to do it for us”, said Caroline, who stressed the importance of self-determination and community empowerment.

Furthermore, Caroline gave an example of women in a village collectively working on projects together, like helping each other build new houses. They would make each person in their network a new house and they would gather the material needed to build the house from other cooperative businesses.

There was a lively discussion with plenty of questions after the presentation on Sarafu-Credit’s Bangla-Pesa. One of the many questions focused on hatching new ideas around sharing-based communities, instead of exchange based communities that could present inequalities based on the ability of services to exchange. Caroline said,

“We are trying to move into a community whereby we are recognizing individual talents … that there is diversity in the community and that we should move away from the idea that we should monetize that. We try to live in a community that recognizes peoples needs, not monetizing them.” – Caroline

Grassroots Economics have created .pdf with their user guide and have plenty of resources on their website. The video below shows how the Bangla-Pesa works.

To hear the full speech and question session of Sarafu-Credit click here.

For further reading on the Bangla-Pesa, here are a few attention-worthy papers:

This is a good way of helping the less fortunate,and I would like to work with you guys achieve and implement this noble idea .