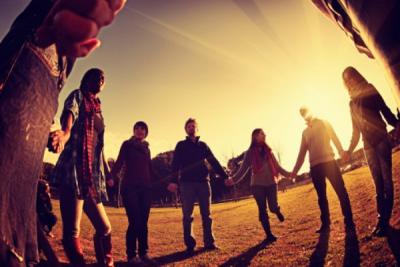 Some revolutionary activists have an amazing ability to avoid the economy. We have been iron-branded with the idea that the economy is not only evil, but the cause of all evil; that we should stay away from it and feel guilty about being involved with it. Like don Quixote, we are sane and pure-hearted, but we refuse to see this one truth: we need a new economy.

A new economy begins with a new kind of money. If you’ve managed to live in something close to a gift economy: congratulations, you’ve made it! This only works for some of us, though, living in relatively small communities, and not on a global scale. You have to realize that you’re not really changing your neighbors’ world by trading Ubuntu installs for massage; you’re not overthrowing the hyperarchist system of human domination by paying for your tofu in rainbowcoins, now, are you?

While complementary currencies do a great job at local level, they’re just that: they complement other parts which together make up a whole. And what we really need is to build up a whole new way to live in this world.

Here we go! So, we need money, we need decentralized international markets, financial tools, solid trade networks… a financial system, after all. Money, or food for that matter, aren’t harmful: bulimia or capitalism are. Money can and should be used for the common good — and by money we don’t mean fiat currencies, of course. Fiat currencies are created and controlled by an evil structure, and used for tyranny and planetary destruction (also, we don’t see a way we are ever getting any of that pie).

We need to create our own monetary system — a better one, one that will suddenly make theirs obsolete and their banks worthless, just like the electric car would do with the gas distribution network. And we need the transition to be fast enough so they don’t have time to react and use it for their benefit. What you’ve just read is the definition of the term disruptive technology.

In 2008, when Satoshi Nakamoto created Bitcoin, he came up with two disruptive technologies at once: the blockchain, a public, universal, unalterable digital ledger, and the proof-of-work (POW), a new network p2p security system. Together, thanks to the power of cryptography and the Internet, they allow us to decentralize, and hence democratize three things:

Anyway, individualistic approaches to this new technology — like bitcoin — are very interesting experiences, but frightening. We can even picture a gloomy future ruled by cold algorithms and controlled by relentless DACs (decentralized autonomous corporations). We probably wouldn’t like that much. Maybe the solution to state hierarchy is not completely math-based individualism. Maybe a middle path (as David Harvey would put it) is needed, where the potential of decentralization and the capacities of cooperations could join together.

A disruptive technology is not revolutionary in itself, unless it comes wrapped in a new system of governance, and also in a new ethical paradigm, one that’s broadly and honestly accepted, never imposed. Revolution is not only a political change, but a cultural and individual mindshift. The perfect political system won’t work unless we first learn how to love each other. Any revolution prior to that will lead to disintegration of power only long enough for the next populist leader to figure out how to get hold of it.

And well, we also need to go further than a new financial system…

Productive businesses are usually forced to make a big profit to pay back their debts to financial institutions. The so-called real productive system needs to be freed from the parasite, and when that happens we will clearly see how the financial system has absolutely nothing to offer to society, how it was all a gigantic scam, and how most of it is simply disposable.

We (including you) have a lot of work to do in building a peer production / commons-based framework of initiatives, and this framework cannot depend on credit coming from the old banking system. A new system must be built at the same time.

These thoughts inspired the creation of FairCoop. One of us, Enric Duran (co-founder of the first integral cooperative) chose a cryptocurrency, Faircoin, anonymously encouraged a community take-over of said cryptocurrency, and bought a significant amount of all existing coins at a low price, unnoticed. Enric then brought together people from the CIC, the P2P Foundation, the Dark Wallet team, and other activists, to co-design an initial vision of how FairCoop could help build a worldwide cooperative: An Open Coop totally independent from banks or states, where everyone could have control of their own projects and money, yet overseen by a collective structure acting as a trust network. Success is about trust, even in post-capitalism.

This collective structure design is subject to very general, but nonetheless clear ethical principles taken from hacker ethics, the integral revolution, and the p2p model of social organization. Money dynamics are neither controlled by a central authority nor completely unregulated, but managed collectively in a less archist and more participatory way. The decision-making method is fairer than the representative system but more agile than some of those huge, endless assemblies we used to enjoy.

FairFunds are important among FairCoop’s currently available tools. They will provide funding to projects that fall into the above-mentioned principles, and that can add to the common good. More than ten million Faircoins – about 20% of total supply — is already deposited in the FairFunds, and will be used to fund projects related to wealth redistribution to local communities worldwide, people empowerment, and the creation of commons and free technology.

FairMarket, our worldwide collaborative fair economy marketplace, is another space where we can change the way consumers and producers organize to exchange interesting goods and services, in a way that avoids middlemen and also helps the planet. This aspect of our project is currently in development for an upcoming beta launch.

Returning to the cryptocurrency, Faircoin has certain features which make it fit the FairCoop purposes. Basically, the process of extraction is different than that of Bitcoin (POW). It’s called minting (POS, proof-of-stake). But yeah, it was mostly about the name. Which currency you choose doesn’t actually matter that much. The most important features of this new system are not imprinted as algorithms in the code; instead they will come from the human input and democratic participation of all members.

With the creation skills available in our p2p commons networks, we’re sure that the Faircoin of the future will join the decentralized technology of the blockchain and the human-centered values of cooperation.

At any rate, besides the tools we have working or designed already, what matters most in FairCoop is the open process. In a world changing as rapidly as ours, where disruptive technologies are aggregating and creating an unprecedented multiplier effect, the way we can become as successful as possible is by also aggregating simultaneously, coming up with new and better ideas day by day, building our knowledge and experiences in our own FairCoop ecosystem.

We do not destroy the system by attacking it with our wooden spears. We are creating a valid alternative, and have started developing it. FairCoop aims to provide new, free, collaborative economic, social and technological tools for everyone, and will try to make sure they are used in a cooperative way for the creation and expansion of the commons worldwide. An Earth cooperative to build the fair world of the future.

We can all help to make this happen. You can learn about the different ways to get involved here.

Pablo Prieto is a scientist working on the science of a post-capitalist world. He is a member of FairCoop. Enric Duran is a post-capitalist activist and co-founder of the Catalan Integral Cooperative and FairCoop. He is widely known as the “Robin Hood of the Banks” for his legendary anti-capitalist bank swindles.

Pablo Prieto is a scientist working on the science of a post-capitalist world. He is a member of FairCoop. Enric Duran is a post-capitalist activist and co-founder of the Catalan Integral Cooperative and FairCoop. He is widely known as the “Robin Hood of the Banks” for his legendary anti-capitalist bank swindles.