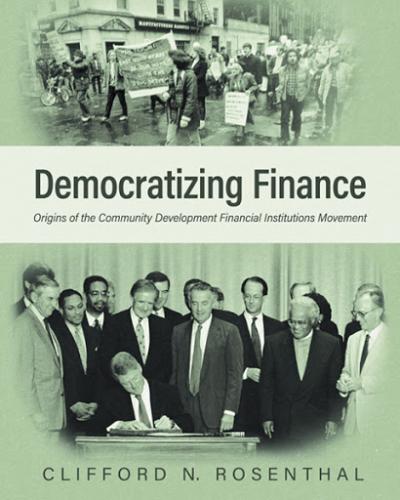 For those of us working to build the co-op economy in the U.S., Community Development Financial Institutions, or CDFIs, are strategically vital players in making more cooperation happen. Here in Vermont, knowing that the Cooperative Fund of New England (CFNE) can step up with a loan to low-wealth workers seeking to convert their employer to a worker co-op without requiring personal guarantees makes starting down that path feel possible to folks for whom business ownership has always seemed out of reach. Similar roles are played elsewhere in the country by the likes of Shared Capital Cooperative and the Local Enterprise Assistance Fund (LEAF). Though tiny compared to more traditional (and highly regulated) financial institutions (together, the trio of co-op-centric CDFIs boast about $50 million in assets), they nonetheless form a key foundation for so many possibilities for the solidarity economy.

While being keenly aware of the importance of CDFIs, I had only the barest inkling of their origins, and so I was thrilled to recently have the opportunity to read Clifford N. Rothensal’s newly published Democratizing Finance: Origins of the Community Development Finance Movement.

The first section of the book is a masterful examination of the origins and development of the variety of types of grassroots financial institutions that eventually came together into an alliance around the CDFI idea. Credit unions, development banks, loan funds, micro-lenders, and other players get a thorough and well documented treatment that shines light on both broad trends and key institutions, many of which are significant players in the present day.

With the pre-history covered, the book’s second half reads almost like a political thriller, as it chronicles the political maneuverings around the creation of the Federal CDFI Fund in the 1990s and its tenuous first years in existence. One of the key takeaways from the experience of the War on Poverty credit union experiments was that forming cooperative financial institutions in low-income communities needed more than a few years of subsidy for administrative expenses. In capital starved places, the retained earnings from that short a runway were grossly insufficient to reach organizational sustainability. Instead, what was needed was equity.

The tale of the path to getting that consistent source of that sort of equity is a study in coalition building, concession extraction, and occasional luck. Bill Clinton, having been inspired by the since-problematized microlending experiments of the Grameen Bank in Bangladesh, had made support for community development finance a major campaign plank in 1992, and his administration pushed hard for the creation of the fund in the first years of his Presidency. Further, the fortunes of the framework were tied to greater and lesser extents to reforms to the Community Reinvestment Act (CRA), which put the CDFI coalition in a delicate spot between CRA-focused community activists and banks, which saw investment in CDFIs as a potential vehicle for efficiently making the required CRA tribute.

In the end, after much wrangling, the CDFI fund was established and funded with $50 million in its first year, which, while a far cry from the levels Clinton pitched in his campaign rhetoric, nonetheless made a significant impact for a number of institutions. Furthermore, after a first few years in which the existence of the Fund remained in peril, it has become institutionalized to the point where it has been consistently funded since, and has distributed over $2 billion in grants in the last 25 years.

The history that Rosenthal documents in Democratizing Finance is vital knowledge for those of us engaged in grassroots economic organizing today. Not only does it put many existing institutions, like CFNE, in a richer context that has deepened my understanding of their origins, but it also conveys many lessons learned by previous generations that we can build, if only we can manage to maintain the Long Memory. As one small example, his discussion of the strategy of creating closely allied non-profits and lenders such as in the case of Self-Help Credit Union has inspired me to consider the role of participatory grant pools as potentially powerful and useful parallel structures when forming new co-op investment clubs. There are many such dynamics and cases, large and small, in Rosenthal’s narrative that will inform many readers’ work in surprising and exciting ways.

In all, Rosenthal’s book is a well-written, well-researched, profoundly informative read, and I highly recommend it to anyone interested in understanding the past and possibilities of democratic finance.

Matt Cropp has an MA in history from the University of Vermont, where he focused on the history of the credit union movement. He currently works as Co-Executive Director of the Vermont Employee Ownership Center, serves as chair of the Vermont Solidarity Investing Club (which invests exclusively in co-ops), and is involved with a number of co-op start-up and cross-sector initiatives including Full Barrel Co-op, social.coop, and Cooperative Vermont. He lives in Burlington, VT.

A Public Bank for the Public Good

An Ethical Bank for Croatia