The Life and Times of James Boggs 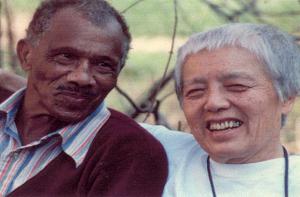 James Boggs’ life was one of imagination and reimagination. His narrative was one of hardcore socialist, to Black Power advocate, to Humanitarian solutionary. There was never a time when Jimmy, as he was affectionately called, would get stuck in dogmatic doctrine; he made it a point to constantly learn and adapt to his environment.

In his formative years while working in the auto industry, Jimmy predicted and envisioned a time when automation/technological advancement would replace human labor in the workforce. With this understanding, Jimmy crafted a vision into a formidable body of work entitled The American Revolution: Pages from a Negro Worker's Notebook.

In  Chapter 2 of The American Revolution, “The Challenge of Automation“, Jimmy points out that “Automation is the greatest revolution that has taken place in human society since men stopped hunting and fishing and started to grow their own food.”  At the dawn of the technological age and even today, most of us turn a blind eye to the exponential growth of automation displacing people from the workforce. But Jimmy faced the issue of automation head-on by declaring we must have hope and we must work towards a new way of life, a life not centered around a job but a life centered around community, centered around family, centered around our world environment. Instead of automation enslaving us, Jimmy saw that automation could actually free mankind to pursue those things in life that man so passionately cared about.

With that being said, it is not automation we should fear but what international and transnational corporations will do with those advanced tools of technology. We must make a preemptive strike to replace the job system with a life system.

Just as today’s Solidarity Economy economists talk about the permanent displacement of workers/poor people, Jimmy coined his own phrase.  His phrase was “The Outsiders” (who were people permanently locked outside the workforce and thus outside of normal society and the job market).

Furthermore, Jimmy said “once released form the necessity to work, men and women would come up with new ideas for increasing productivity that would astonish the world”.

But even more important than a Solidarity Economy is a Solidarity Culture, because culture is what defines us as human beings with our relationships with each other and our environment. Culture is the glue that holds a society together or a sword that can tear society apart.

So, yet again we point to the landmark vision of James Boggs. He understood and said that “The first principle that has to be established is that everyone has a right to a frill life, liberty, and the pursuit of happiness whether he is working or not.”

As an autoworker, Jimmy unequivocally announced “I am a factory worker, but I know more than factory work.” This bold and emphatic declaration was the working man’s emancipation proclamation, declaring to all workers we have value beyond our place in the means of production. We must remove the shackles of work from our minds when thinking about defining our lives. We break these shackles when we see ourselves not as workers, but as humans who have gifts and talents we wish to share with the rest of humanity.

Lastly, but certainly not least, Solidarity Culture was born through the following declaration:

“We must create a society of politically conscious, socially responsible individuals, able to use technology for the purpose of liberating and developing humanity.”

Today, we should admit to ourselves the culture we practice is the materialistic culture. In this culture, there has been a devaluing of human life while value has been added to the material wealth one can gain.  Crass materialism is tearing apart the foundations of our society. By placing our value of wealth on symbols of material status — whether it be a car, a house, or a job — instead of valuing principles such as truth, integrity and kindness, we value products over people.

We need to look at the one person who can make a difference in this world, ourselves, and ask this question: Do we want a culture of Life or a culture of death? According to Jimmy, a culture of death leads to “the pollution of our atmosphere, the erosion of our soil, the threat to nuclear destruction, the withering away of human identity and, worst of all, the loss of our freedom to make meaningful and principled choices.” How would a culture of life look? Well, if we take a minute and think about it, it would be the converse of a culture of death. Our Solidarity culture would consist of respect for environment, full employment, universal health care, education, and housing.

I have sent this article to GEO because, as Solidarity Economy practitioners, it is time that we break out of the chains of the traditional, corporatized Black History Month. It’s tradition that limits our memories to Dr. King, WEB DuBois and a few others, when in actuality there were a plethora of African Americans creating and fighting for a new reality. James Boggs was one of these people. As an autoworker, he saw beyond the industrial revolution to the point in time when workers would control the point of production, not for profit, but for the benefit of planet and people.

Asar Amen-Ra, is a long time labor and community organizer. With a focus on social and economic justice.