On June 21, 2014, the New York City Network of Worker Cooperatives (NYC NOWC) hosted the first annual NYC Conference on Worker Cooperatives (videos of most of the conference sessions are posted here.) Two hundred people gathered at the CUNY Law School in Queens. The excitement in the room was palpable. A budding worker co-op movement has been on the move in NYC. Since Occupy Wall Street, there has been increased interest among activists in worker-owned worker-managed businesses as one strategy for workers to take control of their economic life. A coalition of worker cooperatives, community groups and advocates on the new progressive NYC Council, have been working together to develop a plan for growing the worker cooperative sector in NYC. This work culminated in an announcement on June 19, 2014, "The City Council secured $1.2 million in funding to support the expansion of worker cooperatives throughout the City to help low-income and minority New Yorkers become business owners." Moreover, new NYC Mayor, Bill De Blazio declared June 21, “Worker Cooperative Day” in New York.

In the morning, panels addressed “micro” issues such as “What is a worker co-op?” and “How are they organized?” In the afternoon the conference focused on “macro” issues such as how to develop an integrated co-op sector and what is the role of non-profit and government in co-op development.

Carmen Huertas-Noble, the founding director of the Community and Economy Development Clinic (CEDC) at CUNY School of Law, and Christopher Michael, a founding director of the New York City Network of Worker Cooperatives, opened up the conference. Worker cooperatives, Michael explained, provide the means to democratize the workplace. They turn our businesses into moral vehicles rooted

in the values of the people at large, and not just those of the investment class. The first panel was intended to introduce people to the meaning and structure of worker cooperatives, as not everyone in the audience was familiar. Omar Freilla, founder of Green Worker Cooperatives in the Bronx, provided a simple, straightforward definition; cooperatives, he said, are owned and controlled by the workers. Various institutions provide auxiliary support. Karen Haskins’ organization, Working World, for example, provides loans which put finance directly into the hands of workers. Emma Yorra, of the Center for Family Life, pointed out that a great deal of responsibility comes with owning your own business.

Teresa Bucio of Apple Eco-Cleaning, Yadira Fragoso of Si Se Puded Women’s Cleaning, and Annie Sullivan-Chin of A Bookkeeping Cooperative, composed the second panel. Their stories provided a glimpse into what it is like to organize and work in cooperatives. For example, Teresa Busciao spoke about coming to the United States from Mexico in 1977. She worked at a garment factory for eighty hours per week at a salary of three-hundred dollars. In the wake of the financial crisis, she lost her job, becoming a day laborer in Williamsburg, Brooklyn. Her story highlights the importance of building strong linkages between workers and organizations for economic and social justice. In 2010, with the help of the Workers Justice Project, Teresa and other women started Apple Eco-Cleaning, a workers co-operative. She explained, “We are the women, the mothers that work hard to make dreams come true.”

[For non-Spanish speakers, the translation of Teresa's remarks begins at 8:37 -ed.]

In a breakout session, Jessica Gordon Nembhard and Jim Johnson facilitated a discussion of the role of cooperative developers in creating worker co-ops. Cooperative developers are technical advisors who consult with new and existing worker co-ops to help them start and improve their businesses. The US Federation of Worker Cooperatives has a cooperative developer certification program, Democracy at Work Network (DAWN). The session was organized around a presentation of the Madison Principles, which are professional standards for cooperative developers. A good portion of the discussion focused on the challenges of facilitating the empowerment of marginalized groups in the context of worker co-op start-ups. Often, starting a new business is a long process and it is not uncommon for some of the founders to drop out. A key challenge of worker co-op founders is create a plan and protocol to transfer their “business vision” to potential co-op members and teach the skills to implement plan.

The first panel of the afternoon was composed of a mixture of academics and activists. The discussion focused on the various ways worker cooperatives are an integral part of larger social movements. Cooperatives can provide the space for poor, often invisible communities to find their collective voice, sense of empowerment and connection to issues of social justice. Ligia Guallpa spoke about the way The Workers Justice Project helps low-wage workers to link their own experiences of exploitation (wage theft, cleaning with toxic chemicals) to those of the broader worker’s rights movement. Ngoc-Tran Vu of Mekong and Saduf Syal of Make the Road New York also talked about their work with low income communities in the outer boroughs of New York City. While Jessica Gordan Nembhard and Ed Ott, both of CUNY, discussed the historical connection between worker cooperatives and social movements: Gordan Nembhard about the history of cooperative economics in the movement for civil rights; Ott about the historical relationship between unions and other forms of worker’s organizations. 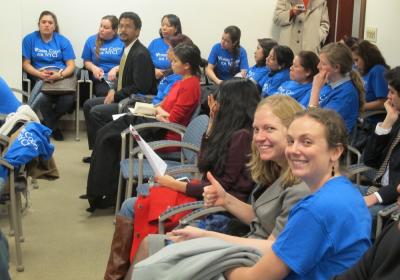 The last two panels focused on growing a cooperative economy and specifically, how New York City is going to support worker cooperative development in the city. Brenden Martin, of The Working World, stated that with the recently announced 1.2 million dollar co-op initiative, NYC is now the leading city in USA in regards to a worker co-op policy. He asserted that the worker co-op movement is attempting to challenge the heart of social injustice by creating a worker-controlled economy from the ground up. Worker co-ops often start out of defensive necessity. The Working World, a worker co-op controlled revolving loan fund, started assisting Argentinian workers who took control of their workplaces when the owners of the businesses abandoned the businesses during the Argentinian depression at the start of the 21st century.

Michael Peck, of Mondragon, USA, described a specific story of how the value of solidarity inherent in a cooperative economy can make a big difference in the lives of workers. Mondragon is a large worker cooperative network in the Basque region of Spain consisting of 289 businesses with over 80,000 workers. The centerpiece of the system is one of the largest banks in Spain. Michael told the story of Fagor, an appliance manufacture co-op in the Mondragon system which went out of business when the housing market in Spain collapse reducing the demand for household appliances. Unlike the usual corporation that focuses only on the bottom line, Mondragon believed it had a responsibility for displaced workers. Fifteen hundred workers were trained and moved to other businesses in the system. Others were given early retirement packages. Now Mondragon has come to the US. In cooperation with a number of US unions, Mondragon USA is dedicated to developing unionized worker co-ops in the US. Moreover, the CUNY Law School and Mondragon are working on a project to offer a masters program in work cooperatives. 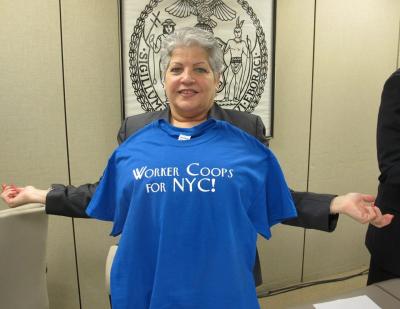 The Honorable Maria del Carmen Arroyo of the New York City Council and Honorable Carl E. Heastie of the New York State Assembly closed out the day by speaking about the city’s support for economic democracy. Worker cooperatives, Carmen explained, can be a model for economic development. By helping workers start their own businesses that they democratically control, worker cooperatives have the potential to both provide the economic foundation for families to transcend poverty and build greater equality in New York City. The City Council is considering other strategies to support worker co-op development. For example, an idea has been discussed for the NYC Human Resources Administration to recognize worker participation in a worker co-op start-up as an alternative to the traditional workfare program. Also, strategies for facilitating access for work co-ops to bid on NYC contracts were discussed.

The goal of the initial 1.2 million dollar investment by the city is to provide aid to the forty existing working cooperative businesses to help them grow, to start twenty-eight new co-op start-ups over the next year and to create 600 new jobs. Some in the audience question whether the time frame and scope of the project might be too ambitious for the amount of resources being invested in the project. Perhaps, this estimate is optimistic given that Scott A. Shane, a professor of entrepreneurial studies at Case Western, recent estimated that the cost of per job for entrepreneurial job creation is approximately $31,000. However, Chris Michaels expressed optimism that the goals are doable. And, Carmen Huertas-Noble replied that failure is not an option.

Indeed, though growth projections may need to be altered with further experience, failure seems unlikely given the amount of time and energy being put into existing and new cooperatives throughout the city driven by the moral and solidaristic appeal of the democratic work model. Worker cooperatives currently make up a very small portion of our economy. However, in time, they have the potential to become a powerful force for building economic justice not only in NYC and the United States, but throughout the world.