[Editor's note: this is the third entry in a series of articles on European ecovillages by Matthew Slater.  Parts one and two looked at Spain's Lakabe and Amalurra communities.  Watch for more stories in this series as Matthew continues his tour.]

The land is owned by a cooperative in which all members buy a stake. There are a few large straw-bale houses which are designed for a family and several friends and guests, while half the members live in 'temporary' caravans waiting for the money and the people to come together for subsequent houses. Where would this money come from? Mostly from rent from existing members, a little from new members buying their stake, some from loans from supporters and banks, a little from donations.

Most of the village's income is from running short educational courses for up to 30 outsiders at a time. In addition there is a large carpentry workshop and several building experts, sustainable forest supplying fuel, and numerous micro-enterprises, including Raw living which employs 5 people. The units supplying the village with essentials - 60% of the vegetables and all the firewood, are owned by the coop, while the rest are private.

Many other people work within the village, in micro-enterprises, freelancing, or for the village itself, earning modest amounts of money and using it to pay rent, tax, buy things in the shop, etc. Few people work outside. 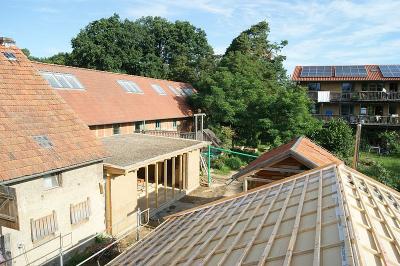 The village exports very little, partly because of the lack of neighbours, I think if the village wanted more income from trade, it could easily export more, but those producers do not feel the need for that. Certainly the material standard of living is adequate. Exchange without money is not widely practised - remember Germany is the only country in Europe not in recession.

There are many solar panels around for heating water. On sunny days electricity is sold to the national grid. Wood gasification boilers warm several houses at a time with high efficiency and bottled gas is used for cooking.

There is extensive buying in bulk and members simply take the food and toiletries they need from the store. Some eat communally with the guests, some privately but all take their turn in the kitchen. There are five shared cars and a minibus.

Retired people contribute to the economy as well. One man maintains bicycles, and another has his own garden patch, donating food to the store. Since the state provides adequate money for the elderly, the village has no special provision.

As with everywhere, I suppose the national legal and financial system is not at all suited for community life and Sieben Linden is a pot pourri of legal entities and relationships. The village is comprised of many legal entities with many financial vectors between them e.g. the garden unit sells food to the catering unit, which takes money from the courses; If money did not flow in this way villagers would not qualify for national insurance, but some members think it leaves less room for the gift economy.

Go to the GEO main page