Thoughts on Klein's "This Changes Everything"

Today, man is still, or more than ever, man's enemy, not only because he continues as much as ever to give himself over to massacres of his fellow kind, but also because he is sawing off the branch on which he is sitting: the environment.
Cornelius Castoriadis 1 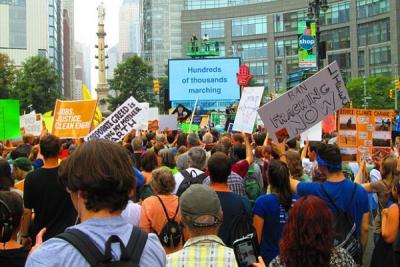 Climate change, caused by human activity, is forcing its position at the center of the public debates. And that shouldn't surprise us since the crisis it’s about to cause is of much bigger magnitude than any other economic or refugee crisis we have experienced until now. If such a crisis occurs it is possible that it will change the face of the planet entirely, possibly making it uninhabitable for humans as well as for most animal species. This gives new strength and importance to the debate about how we will continue the development of our societies without endangering our very existence.

Carbon emissions, being released into the atmosphere as a result of burning fossil fuels, are amongst the main factors responsible for global warming. And the fact that the energy of our highly technological societies is being delivered mainly through these non-renewable and polluting resources raises further questions about what could replace them and what it would take for such a change to occur.

In her book This Changes Everything, Naomi Klein investigates these urgent questions in depth. She demonstrates the limitations and disadvantages of centralized energy sources such as nuclear energy and natural gases, which are both embedded in the contemporary corporatist, top-down model. She argues for transition towards localized, democratically managed renewables that will prioritize human and environmental needs before profits and autocratic interests — i.e. they will be turned into commons. The proposal of commons-based systems beyond the dogma of constant economic growth is being shared by growing number of thinkers, social movements and communities (see The Commons is the Future)

However, for such a transition to be initiated we can't rely on capitalist business, as Klein demonstrates at length in This Changes Everything, reviewing the fruitless, often even ecologically harmful, collaboration between the big green organizations and the corporate sector 2. No private company will dedicate its resources to a developmentalist model that prioritizes human lives and nature before profits. By design these entities are based on growth through profiteering and expanding markets by all means necessary. For example, even when they do engage with renewables they use them in the frames of the capitalist growth doctrine, creating environmentally harmful and community-exclusive, but highly profitable in capitalist terms, gigantic, centralized solar or wind parks, et cetera. Furthermore, the energy sector, she notes, is contemporarily constrained from turning to renewables on larger scale because of the exponential growth it is currently enjoying amidst the shale gas boom 3. 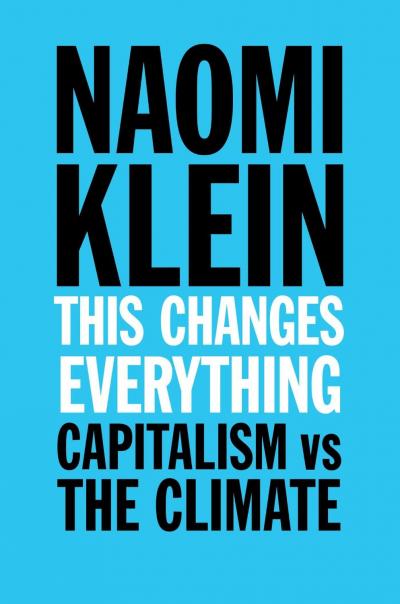 The state, on the other hand, is traditionally seen as the sole alternative to the private sector, thus a potential ally against the polluting multinationals. But statist entities have proven to tend towards centralization, bureaucracy and unaccountability, and are thus disconnected from local needs and experiences. States are deeply embedded in the growth-based extractivist imaginary of capitalist globalization, as Naomi Klein points at state-owned companies — ranging from Scandinavian 'social democracies' to ‘pink tide’ governments, like the one of Ecuador 4 — that wreck nature for extracting resources to trade in global markets 5. The top-down socialist states of the past, with their five-year plans, were equally destructive of nature, as well as remote from the societies that they were supposedly 'developing'. This is ever more evident in today's China, whose Communist Party is easily and eagerly adjusting its policies to the extractivist agenda, sacrificing even the air its citizens breathe in the name of economic growth.

Instead, a new approach is needed for such a crisis to be tackled efficiently. It cannot be resolved by mere reforms — as we saw, the capitalist economic model and statist top-down decision-making processes are essentially predisposed towards enforcing, not preventing the ecologic crisis. This poses the need for holistic systemic alternatives, compelling us to think outside the dominant institutions and come up with new ones or advance ones that already exist in the margins of society.

Towards a new energy paradigm

One such proposal is the creation of democratically managed utilities, like energy cooperatives or commons, managed by the communities that use them. Such models strive toward local sustainability and satisfaction of human needs (reflected by their participatory character) instead at profiteering and growth. This will enable communities to have control over their energy sources — in contrast with other models managed privately or by the state — thus directing communities away from dirty fossil fuels and towards much needed renewables. Naomi Klein notes that such types of commons-based renewables can be cheaper than dirtier alternatives. One of the reasons is they can be sources of income for their communities when unused power is being fed back to the grid 6.

Decentralization and communal participation are of great importance for the successful acceptance of renewables by society. Klein speaks 7 of many reasons why communities would rebel against large-scale, privately or state owned ones — from the noise of densely positioned wind turbines to the threat of inflicting damage to wildlife and ecosystems posed by gigantic solar parks. In contrast, communally owned, locally-based renewables are hugely accepted by local residents due to their smaller, human and environmentally friendly scale, the energetic autonomy they provide for their communities, revenues from selling back to the grid and so on. 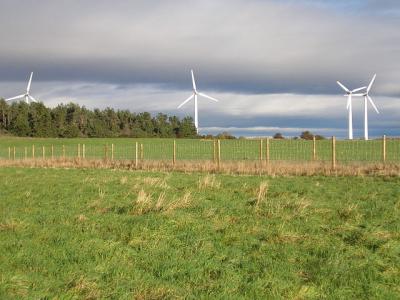 Germany's energy sector has long been exemplary for the establishment of many such utilities 8. Nearly half of its renewable energy is coming from sources in the hands of farmers and citizen groups. Amongst them are many energy cooperatives, numbering close to a staggering nine hundred. These utilities play a dual role: simultaneously, they produce clean power and generate revenue for their communities by selling back to the grid.

Germany's predecessor in this field, however, is Denmark 9. In the 1970s and 1980s, more than 40% of the country's electricity was coming from renewables (mostly wind). And roughly 85% of them were owned by farmers and cooperatives. As in Germany, those most committed to sustainable energy in Denmark were not statist entities or privately owned companies, but local communities. In the last number of years, many multinationals have entered the energy sector of the country, creating difficulties for the communal renewable utilities.

As we observed above, we can't overcome the ecologic crisis through the private sector and the nation-state. Dimitrios Roussopoulos, coming from the tradition of social ecology, emphasises firmly that the overcoming of the ecological crisis can be done in a stateless and direct-democratic manner 10. In a way, Naomi Klein's thought intersects this logic by emphasizing that potential grassroots social movements and communities have to resist and initiate bottom-up solutions to the climate crisis 11.

History shows us that the main enforcer of emancipatory social changes were not artificial managerial mechanisms like the nation-states but society itself. The abolition of slavery, the introduction of universal suffrage rights, the eight-hour workday and many more were all product of struggles waged and won by social movements over governments and authorities. The environmental cause is no different; however, as Klein and Roussopoulos also suggest, it has to be understood as part of a wider emancipatory struggle in order to overcome the weaknesses it contemporarily entails: the messianism it often embraces, the neglecting of other causes and the elitist attitude it sometimes has. 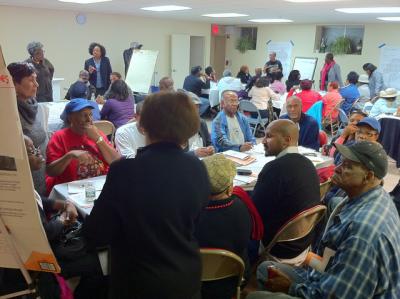 One way to approach these, and many more weaknesses, is for the ecological movements to be radically democratized. Thus professional "negotiators" will be replaced by assemblies of rank-and-file activists and concerned citizens, creating healthy human relationships and linking these movements with society — i.e. emphasizing the squares rather than the luxurious corporate or government offices and dimming the separation between “activists” and “ordinary people”. With no top-down “professional” leadership to collaborate with political and economic elites, the messianism and elitism couldn't easily find fertile soil to grow. And since environmental matters are interlinked, the social movements that deal with them should have an intertwined character. This would imply the establishment of a network of groups, with each group leading its fight but collaborating on the global level with other groups.

The interaction of the ecological movements with other social movements is of crucial importance. One of the reasons is that all spheres of human life are interconnected, and this includes humanity's relationship with nature. As we have seen above, capitalist economics, mixed with top-down bureaucracy, influences our health as well as that of the planet and so on. Thus, anti-capitalists, ecologists and direct democracy movements should all collaborate with one another, transfusing from one struggle into another.

Such collaboration could prove very fertile especially for the ecological movements. For example, the growing number of municipal platforms participating in local elections, like Spain’s recently established Network of Cities for the Common Good 12, could provide friendlier environments for communally owned and managed renewable co-ops. The Olympia for All municipal platform in Olympia, Washington (USA), for instance, has made environmental commitments in its platform 13, showing an ecologically friendly face. In a globalized system hostile towards grassroots initiatives, as we saw from Denmark’s experience where the liberalization of the market gave energy co-ops a hard time, the radicalization of municipalities could provide much needed breathing space for collaborative experiments.

The climate crisis is quickly unfolding and we hear about it ever more often from scientists, journalists and even Hollywood blockbusters. We see its signs in the form of natural disasters appearing with greater frequency and destructiveness. But the dominant institutions are unable to tackle it successfully. It’s not without reason to suggest that it is not because of lack of political will, but a consequence of the growth-based top-down politico-economic system which nowadays squeezes all of the Earth. The resistance takes global shape: activists from the US, experienced in the anti-shale gas struggle, share their experience with Canadian communities resisting fracking, who on their part share their know-how with French movements struggling against shale gas extraction and so on 14, leading to some major victories in the form of bans on fracking in municipalities across Canada and USA and in all of France.

However, for the effective tackling of the climate crisis, a more holistic approach is needed. This struggle has to be integrated into a political, direct-democratic project, one that goes beyond "ecology" alone. Otherwise, as Cornelius Castoriadis warns us, ecology can potentially give strength to neo-fascist, messianic ideologies, excusing the establishment of authoritarian regimes who impose draconian restrictions on a panic-stricken and apathetic population 15.

Yavor Tarinski is an activist and community organizer in Bulgaria. He is a compiler of two books in Bulgarian on direct democracy.

Fairness and the Commons