The Converters: Massage Chairs and Recliners

Following last week’s feature on the start-up co-op New Hope Farm, this post continues our series on the 2014 Worker Coop Academy (WCA) in Oakland, California by focusing on “converter” co-ops On the Spot Massage and Sarana Community Acupuncture. Converters are businesses or organizations that have existed as conventionally owned entities but whose owners want to transition into a cooperative. Both of the 2014 WCA converters went into the Academy with the conviction that they wanted to go cooperative, but neither had a clear idea of how. By the end of the Academy, each had created a hybrid cooperative strategy specifically tailored to its needs. 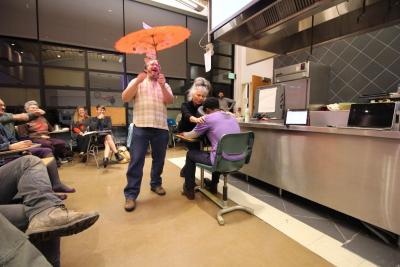 On the Spot Massage - A Hybrid Cooperative Model

Shoshana Frumkin and Brian “Heart” Sroka co-own On the Spot Massage, which operates out of a cozy office in West Berkeley. On the Spot’s mission is to help people relax, whether those people are at work, shopping for groceries, or at a cafe. Right now, this takes the form of chair massage stations, which Frumkin and Sroka hope will help create a pervasive culture of relaxation that could act as a “counterbalance” to today’s dominant frenetic coffee culture.

On the Spot has existed as a successful for-profit entity in various forms over the past decade or so, but by 2014 Frumkin and Sroka were both feeling ambivalent about continuing to work for a wholly for-profit business. As Sroka put it, “I’m not a capitalist. This doesn’t feel right.” They went into the WCA with the instinct that a worker-owned cooperative would be a better way of functioning, but they weren’t sure exactly what it would mean to become one. They found that the course was full of “fundamentals” and “demystified a lot of ideas we had about what a co-op is or isn’t.”

Most helpfully, however, the two emphasized that the WCA offered a community of like-minded people. Sroka realized, “We have colleagues, we have consultants we can call on, we’ve got lawyers and accountants, we’ve got this whole network of people that are coming from this co-op place!” , They found that the WCA was an appropriately “abundance-sharing community,” where people eagerly offered their knowledge rather than guarding it.

Not unlike New Hope, the Academy helped On the Spot develop an ambitious new vision for their business: a cooperatively owned umbrella organization called One Love Source, a collective of brands that will specialize in wellness and well-being. During our interview, Sroka picked up a red paper parasol from the desk next to me and carefully opened it to reveal hanging pieces attached by string to the spokes. They had made this mobile for their final project for the Coop Academy, which helped them visualize how One Love Source could be organized. The top rung will feature a board of directors,with Shoshana acting as a “She-E-O,” Brian as a specialist in online services, and other members supporting financial and cooperative services as well as education, training, marketing and promotion. Once they create the board and establish the association, On the Spot massage — to be renamed “Wellness on the Spot”—will be the pilot brand launched under the umbrella board. This brand, then, will provide logistical and managerial services, while massage therapists will form a cooperative that licenses the brand for use at their chair stations.

Again, as with New Hope Farm, the Arizmendi Association of Cooperatives serves as the most successful paradigm for Brian and Shoshana’s vision  While Arizmendi operates as a pass-through organization that licenses its brand to cooperative bakeries, On the Spot is hoping to create a more diversified organization that can encompass a number of brands, including cooperatives, partnerships, LLCs, and any other kinds of existing entity focusing on wellness and wellbeing that needs a vehicle for expansion.

This is an example of a “hybrid” co-op model—an organization that is privately owned and cooperatively run. As Sroka explains, “It’s not totally co-op, it’s not totally capitalist; it’s somewhere in between.” One Love Source would encourage and support their member organizations to follow cooperative suit, but this wouldn’t be a requirement for their belonging. They chose this hybrid path in order to honor, acknowledge, and compensate Frumkin’s 30-year investment into the business. Turning it over and selling it to the therapists, they said, would not be completely fair to Frumkin.

The WCA helped encourage Sroka and Frumkin to be explicit about their business plan and the motivation behind its structure. For their final project, they were required to collaborate on a clear, realistic, and still ambitious vision that they could both agree upon going forward. Frumkin called the Academy a “reality check”. The Academy’s emphasis on logistics helped them turn their big dream into a business plan. As Frumkin put it, the Academy was “very rich, very nutrient dense. We’re still opening all the gifts that we got from them.”

Sarana Community Acupuncture: To Co-op or Not To Co-op?

Sarana Community Acupuncture in Albany sits in a comfortable, approachable suite in the corner of a strip mall on San Pablo. If you think it looks like a group nap, you are about right. This is affordable acupuncture—visits start at $20, as opposed to private rates of anywhere from $60-$120 an hour. This means that to stay afloat, the business must also be high-volume; appointments are lined up every ten minutes, with twenty minutes allotted for first-time clients. Patients are treated in a shared, softly lit space encircled by stuffed armchairs and massage tables. 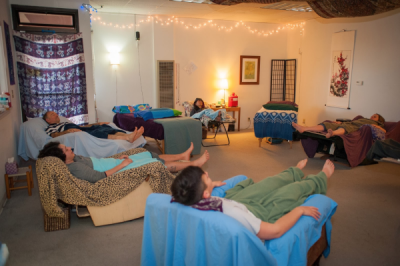 Pam Chang, who co-owns Sarana with Tatyana Ryevzina, says that this model has an advantage beyond just optimizing costs. She has observed that people relax more quickly and often get deeper relief when the treatment space is more populated. The “community” in community acupuncture is firstly about financial accessibility to the treatment, but it’s also about a mode of healing in groups, and one that is accessible and comfortable for people of various incomes and cultures.

Chang and Ryevzina attended the WCA hoping to transition from a privately-owned partnership to a worker-owned cooperative. They both wanted to ensure that their 7-year-old acupuncture business would continue to be community-oriented and fair to workers long after they retire. While attending the Coop Academy, however, they realized that incorporating as a cooperative would not actually be the best way for them to accomplish their mission of offering affordable acupuncture to the community.

As Ryevzina explained, simply enough, this is because Sarana doesn’t really have any profits. Their goal has never been to make surplus money, just to have enough income to maintain their business and to pay their workers fairly. Since their primary aim is to provide affordable acupuncture to their community, any profit would only be used to increase their services. Given this priority, they realized during the Coop Academy that there wouldn’t be much incentive to buy into a worker co-op that didn’t have any profit sharing and never would. Ryevzina laughed, “Who’d want to? I don’t want to buy [into] it!” Sarana already belongs to a national cooperative, the People’s Organization of Community Acupuncture (POCA), and so they reap the benefits of nationally shared information and practices through a cooperatively run umbrella organization. POCA recently introduced them to a similar community acupuncture clinic in Chico, California that had recently converted into a non-profit. Combining their discoveries from POCA and the WCA, Ryevzina and Chang began forming a new plan.

Rather than transitioning into a for-profit cooperative, Ryevzina and Chang decided to incorporate as a nonprofit, or public benefit corporation. However, they still wanted to give up their decision-making control of the organization, which they agreed would be best replaced by collaborative governance. Chang said, “I don’t like being a boss, I don’t like telling people what to do, I don’t like being responsible for their work.” She bemoaned the failings of this so-called “boss-trap” hierarchy, where  “you have to make decisions that sometimes other people would be better off making.” 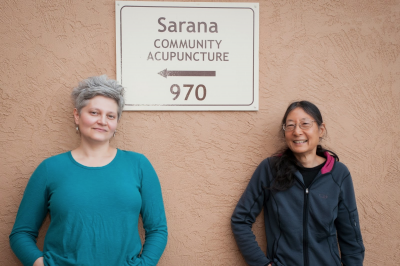 With their new semi-cooperative structure, Ryevzina and Chang will no longer own the clinic but will be members of a “management collaborative,” consisting of Sarana employees who will be responsible for all aspects of clinic operations and support, with oversight from a Board of Directors. Their nonprofit status will have an added benefit beyond removing the boss-trap: Ryevzina and Chang will feel more confident about retiring and leaving the business to deeply invested workers. Additionally, restructuring as a nonprofit will help alleviate what Ryevzina called “the peril of being an acupuncturist”—that is, the expensive schooling and resulting student loans that can be extremely limiting for new acupuncturists. Once Sarana becomes a 501(c)(3), its full-time employees can apply for the federal loan forgiveness program, incentivizing long-term commitment to the organization.

So although Sarana is not ending up as a formal economic cooperative, it will nevertheless be able to use many of the lessons that Tatyana and Pam learned at the WCA, including the outline for collaborative governance as a future non-profit that they developed for their final project. Part of the flexible nature of the WCA meant that some members created business plans, while others came out of it with more of a culture plan, as Sarana did. They are currently working toward incorporating as a nonprofit, so that more people than ever can have access to their community acupuncture and healing.

The owners of both Sarana and On the Spot had certain preconceptions about co-operatives before attending the WCA. If the Coop Academy helps a participant realize that in fact, they’d be better off not as a co-op, but instead as a nonprofit with cooperative decision making, then one business failure has been avoided. Because the WCA was open to organizations at many different stages of development, the course yielded vastly different outcomes for all of the participating businesses.

These varied outcomes reflect an institutional flexibility in the 2014 WCA course. While this quality might have made the tasks of the teachers and organizers more difficult, it could ultimately serve the individual businesses better. With support, resources, and training from the WCA, Sarana Acupuncture and On the Spot Massage have been able to harness the principles of cooperation in the ways that will best help their businesses succeed. And the more they succeed, the healthier, happier, and more relaxed their communities will be.

Read the first two parts of our series on the 2014 Worker Coop Academy here and here.