Reviving and Re-imagining the Motor City 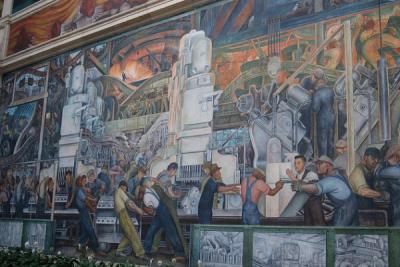 Detroit. My town. This was the beginning of it all, the assembly line, automation and the Ford automobile. Five dollars a day Henry Ford was paying proclaiming that the workers would buy what they made and of course, they did and began to live a life designed and defined by him.

Home of the UAW (United Automobile Workers) a young union that with the help from new Blacks migrating North for good factory jobs and a higher standard of living, fought for and created the ‘middle class’ changing the quality of life for Detroiters and later, America and the rest of the world.

However, precipitous decline in US manufacturing and the abandonment of the automotive industry, left once economically thriving cities of the Midwest like Detroit in a financial upheaval and millions of people dependent on this industry thrown out of work. Spiraling economic disparities now, undermine our democracy.

Most of these accomplishments of capitalism in the twentieth century are gone now and leave us with deepening concerns about quality of life issues.  Detroit, like many industrial hubs of the Midwest and working class cities around the country, are reeling from NAFTA (North American Free Trade Agreement) used to displace American jobs, the housing bubble of 2008 that now leaves Detroit with more abandoned homes than anywhere in America. and last but not least. a municipal bankruptcy (Wall Street scam) unlike any economic farce in the history of the U.S.

Resilience is what Americans possess and it is no different here at home in Detroit as we move into the new century.  Citizens are creating a new vision, a better democracy that serves all of its citizens, even those who have been marginalized.

As cities around the nation, move from sprawling to over-crowded, from Detroit to China the question of how all people live together in a manner that supports the needs of all, sustainably and holistically, remains at the forefront of all city planning conversations.

No one has the silver bullet to solve the crisis we are faced with today. Maybe there is no such bullet. What we do know is that we can do a better job of achieving a quality of life for our citizens -- all of them.

If you look closely...there is another Detroit and its full story has yet to be told...

Some days, people say that Detroit doesn’t seem like itself, anymore.  I am sure what is being made reference to is this existing lull, the quiet storm that is lurking  With all the negative despairing stories beaming from corporatized media reports from Detroit and the nation, some days America doesn’t seem like itself, whatever that ‘self’ may be.  Great illusions paint a picture of loss and despair with our post–industrial city, and illusions are not only false but, also limiting.

If you look closely though, there is another Detroit and its full story has yet to be told because it is being made new every day through the people who call this place home.

This REAL Detroit is about the many people re-imagining a city that works for all.  This is the Detroit for which the phrase “making a way out of no way” was born.  This is the resilient Detroit filled with community activists, social entrepreneurs teaming with community folks to create small venues, newbies coming to build, imagine and grow the New City.  Gentrification is happening all around us, corporate sponsors bringing high-end retail for their high-end consumers, and profits are being made but their model has been used as a form of education to show us how business can be more socially responsible and done differently.

These are just a handful of the efforts on the part of African Americans to create a positive inclusive move forward to re-imagine a New Detroit, to confront, realistically the barriers responsible for our economic, social, and educational disconnect in achieving our pursuit of happiness and quality of life.  We recognize that systemic racial discrimination and denial of access to resources are the main enemies to our achievement. This is our struggle. 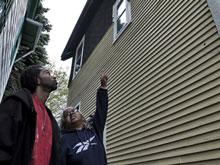 One example:  the high cost of automobile and house insurance in Detroit and throughout Michigan.  The latest initiative has been to build an alliance of Detroiters concerned with this issue and look at the possibilities of starting a co-op credit union in Detroit to address insurance.

Another example:  building affordable cooperative housing in Detroit.  This initiative has started gaining traction with alliances with investments from individuals willing to form a housing intentional community project.

Still another example:  how do you take 1600 gardens and form a cooperative that provides good food, health and employment opportunities?

All over America, Black communities everywhere are at a time of contemplation, asking ourselves what is America becoming and for whom?  I think that a great many of us feel that we love the ‘idea’ of a Democracy, though it has not been witnessed by us, yet.  The question that arises quite often is how do we thrive, or any person for that matter, when lives continue to be shattered?

For most of us the answer lies in our spiritual selves, that gift of resilience that allows for struggle and for overcoming.

What we in Detroit know, thanks to Cooperation Jackson and others that share the light, what we know is that a place – a community, a city, a block –  thrives when people living there perceive it as theirs, and have or can create the material, social, cultural and spiritual connections that provide traction to change the shape of things.

We are reaching out with love accepting the light from all who understand that a new world is possible and is on its way in Detroit.

Gloria Lowe is the founder and CEO of We Want Green, Too!