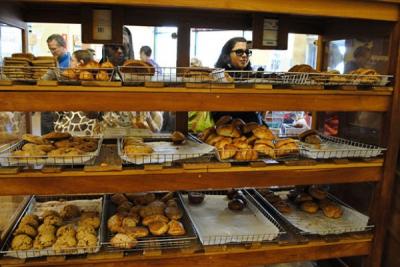 In 1971, the owners of The Cheese Board turned their Berkeley, California, mom-and-pop shop into a co-op, where they became worker-owners alongside their former employees. Over the years, more co-ops branched out from the bakery, forming the Arizmendi Association of Cooperatives, a group of six bakeries and a development and support collective in the San Francisco Bay Area. Today, The Cheese Board Collective, as it’s now called, has an espresso bar, a pizzeria, a menu of nearly 400 cheeses, and dozens of well-paying jobs.

Cathy Goldsmith has worked as a baker there for 21 years. Like the other worker-owners, she also has duties in human resources, accounts receivable, and community relations. She estimates that she makes about twice as much as she would make at other local bakeries where her responsibilities would be more limited.

“If we don’t create laws right now that preserve the character of our city, then we’ll lose it.”

Despite the Arizmendi co-ops’ current success, Goldsmith said that when the businesses first started, financing them was difficult. “No one would lend us money,” she said. “Banks didn’t understand what this was until there were a couple successful [ones] already off the ground.”

This month, Berkeley joined a growing number of cities across the country that are making it easier for co-ops to create jobs like Goldsmith’s. On February 9, the city council passed a resolution requiring Berkeley to create an ordinance supporting worker-owned co-ops. The ordinance will institute tax and land-use incentives for co-ops, create educational support materials for current and potential worker-owners, and make it easier for the city to spend its procurement dollars with cooperative businesses—something no other city has done (Oakland is considering a similar ordinance). To make co-ops more competitive in the bidding process and direct more money to them, the city plans to discount their bids before evaluating them, while still paying the co-ops their full asking price.

Jesse Arreguin, the Berkeley councilmember who introduced the resolution, said the city spends millions on service contracts—money that could be directed to the local economy through co-ops. “We don’t just want to make a symbolic statement,” he said. “We want to actually support co-ops.”

The Bay Area already has a thriving cooperative economy, with the highest concentration of worker-owned cooperatives in the country: There are more than 50 across the region and 10 in the city of Berkeley. But advocates and city officials hope that government support will help create even more jobs to keep locals from displacement, as it has in New York City.  According to the Urban Displacement project at the University of California, Berkeley, in 2013 more than 53 percent of the Bay Area’s low-income households were located in neighborhoods at risk of or already experiencing gentrification.

“We’re fighting against the clock in the East Bay,” said Camille Kerr, co-director of the Workers to Owners program at the Democracy at Work Institute. “Our home values, our small businesses—we’re seeing a transformation that will feel irreversible in the next decade. If we don’t create laws right now that preserve the character of our city, then we’ll lose it.”

Neighboring Oakland and Richmond, California, along with New York, Cleveland, and Madison, Wisconsin, are among the municipalities that have passed their own policies supporting co-ops.

In 2014, New York set aside $1.2 million to support co-ops through its Worker Cooperative Business Development Initiative. The money was distributed among 10 organizations charged with helping create new co-ops, supporting existing ones, and educating potential entrepreneurs. A year and a half later, 21 new co-ops have been launched and 24 existing co-ops have received assistance. Among them are businesses that specifically benefit low-income people, like the Damayan Cleaning Cooperative, launched by Filipina trafficking survivors.  The initiative has created 141 new worker-owners so far, and the city’s 2016 budget includes $2.1 million in co-op support.

“This helps level the playing field.”

Yassi Eskandari-Qajar, policy director at the Sustainable Economies Law Center, helped advocate for the resolution in Berkeley, as well as the one in Oakland. “There are so many hurdles cooperatives have to overcome before they can access finance: educating their worker-owners, accessing legal and accounting advice,” she said. “This helps level the playing field.”

The resolution, slated for approval in December 2015, was pushed to February 2016 due to concerns from others on the council that it might require too much additional work for city staff and give worker co-ops an unfair advantage over other small, local businesses.

“Worker cooperatives are small local businesses but the benefits they provide are above and beyond what other small businesses provide,” said Eskandari-Qajar, who argues that in addition to giving workers more decision-making power, co-ops generally pay higher wages and have better working conditions. She said that Arizmendi co-ops pay workers double the industry standard.

The incentives wouldn’t be given to co-ops blindly either, Eskandari-Qajar said. The ordinance will create a tiered level of incentives that give preference to businesses that add value to the community. In other words, a co-op that gives back—whether it’s by hiring minorities, giving workers full benefits, or something else—would receive preference over a co-op that does not. Eskandari-Qajar has found that, once the benefits are laid out, the idea of cooperatives resonates with people across the political spectrum, including the Berkeley councilmembers who were undecided. “All it takes is a little bit of education to quell the fears and misunderstanding.”

Goldsmith says she is excited to see that cooperatives are being recognized as a positive addition to East Bay communities and a legitimate counterpart to traditional businesses. And as for getting more of them started—“Any kind of help is terrific.”

She adds that what she finds most attractive about the cooperative model is not the higher pay, but the sense of ownership she shares with her 50 fellow worker-owners. “I’m not just a baker here,” she said.

Araz Hachadourian wrote this article for YES! Magazine. Araz, formerly a reporting intern, is now a social media intern at YES! Follow her at @ahachad2