Permanent link to this article: http://geo.coop/node/584

Michael Peck, the North American delegate representing the Mondragon Cooperative Corporation (MCC) addressed the Association of Cooperative Educators annual conference on July 29, 2010 about the new partnership between the MCC and the United Steel Workers (USW). Echoing the Obama administration's call to create "Virtuous Cycle" job creation strategies that engender employment and economic growth, their goal is to de-rust the Rust Belt. Reserves which are the unallocated retained earnings not distributed to members as profits should go to investments in innovations and growth while profits should go to the members of the co-ops in a fair equitable allocation.

Today, MCC which is located in the Basque region of Spain, has over 100,000 worker cooperative members in over 260 cooperatives and is present in more than forty countries. MCC had annual sales of $24 billion in 2009. The cooperatives were started by a parish priest, Father José Maria Arizmendiarrieta with the creation of a vocational technical school. In 1956, five graduates of the school started the first cooperative, Ulgor. "Today, Mondragon is no utopia but rather a highly competitive, lean and efficient, for-profit, industrial cooperative conglomerate, organized through ten basic principles (education, sovereignty of labor, the instrumental but subordinate nature of capital, democratic organization, open admission, participation in management - "one worker, one vote", wage solidarity, inter-cooperation between cooperatives, social transformation, and the universal nature of the cooperative experience)." Peck stressed the importance of the one worker, one vote principle, the commitment to invest in the community (social transformation) and wage solidarity, limiting management salary to 70% of the market rate. MCC is a strong diversified manufacturing conglomerate, the 7th largest in Spain and competitive globally in manufacturing primarily in businesses related to the auto industry. 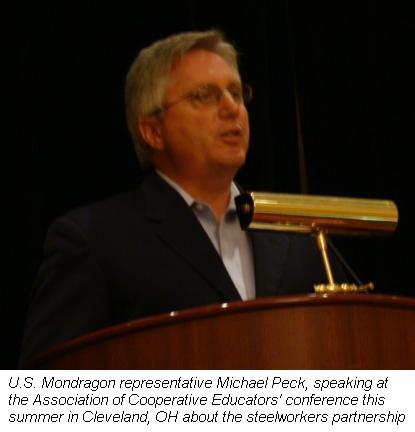 Peck reported on the MCC's collaboration with the United Steelworkers of America (USW) to identify and convert 5 steel companies to a worker co-op form of ownership. Since the USW/MCC partnership was announced last October, the USW has been working to identify potential companies for conversions. Ten companies are under consideration.

MCC is interested in this partnership since it has been difficult to access North American markets. The partnership has great potential for both partners -- better market access for the MCC; and, preserving and growing membership for the USW. MCC has well established cooperatives in the steel industry such as Fagor, Ederlan and Arrasate. The collaboration will be able to join the MCC's established global markets.

Employee ownership using an ESOP (employee stock ownership program) is vulnerable to domination by management and can ultimately work against the interests of workers. Both organizations value the role of labor. MCC considers co-ops an excellent way to promote community solidarity and self-reliance. Peck noted that the discourse that views co-ops as socialistic is not accurate. MCC relies on capital markets and international markets. They acknowledge pay differentials but stress the importance of worker ownership of the companies.

Peck sees this as the right time for creating what he calls the "competitiveness renewal laboratories." These are "Rust Belt" communities that are attempting to restart their economies in cities such as Pittsburgh, Detroit, and Cleveland with a focus on local purchasing anchors and an infusion of social investments to create jobs that will build assets and better compensated work for local residents. "Both in Canada and the U.S., we see emerging "competitiveness renewal laboratories" such as Cleveland's Evergreen Cooperatives, reflecting Spain's Mondragon model and supported by progressive funding sources such as the Cleveland Foundation, and with technical assistance from the Ohio Employee Ownership Center (OEOC), and the Democracy Collaborative in College Park, Maryland. These practical and successful next generation blueprints showcase how North America's working and entrepreneurial classes can shut the door on discredited models and reach for a better way."

The US is at risk of losing its way. Peck believes that many of us are preparing our children for a society of diminished expectations. He doesn't believe that it works to become entrenched in partisan politics. There is a need to look for common ground. Peck, a former naval officer uses a naval analogy for how this can be achieved. He said when you want to tie up two ships at sea, you start with a messenger line which is a very small line. You gradually substitute larger and larger lines until you can gradually and progressively bring them together.

The USW/Mondragon partnership intends to re-enfranchise local working populations and restore capital flows back towards town centers. It intends to keep corporate boardroom interests aligned with the local community stakeholders and neighbors. The new cooperatives will integrate the cooperative model with a collective bargaining committee using the social council in the Mondragon organizational model. According to Peck, the MCC/USW team intends to adapt the social investment models of the Quebec Solidarity Fund and the Mondragon Eroski Foundation to bring in social investments and provide a vehicle for the co-ops to reinvest in their communities. Social investments are grants and "Angel" investments in the form of patient capital at low interest rates to support the startup of new firms and the conversion to worker cooperatives of existing firms where the owners are willing to sell to the workers.

When you look at how Mondragon has performed during this economic recession, you begin to understand why Peck sees this as a way to restore a strong manufacturing sector. In an interview on February 19th of this year, I spoke with Mikel Lezamiz of MCC in Mondragon. Lezamiz was asked how the cooperatives have fared during the recession. He said that the co-ops have experienced a downturn but they have routinely set aside reserve funds. In the machine tool sector, they had 2 years of reserves. When Germany and Spain offered a "cash for clunkers" program to encourage new car sales, the co-ops secured new contracts with the auto industry. In contrast, there were competitors that had no reserves and failed. MCC was not only able to secure contracts but was also able to expand their market share.

LKS, an MCC management consulting firm, will collocate in the USW headquarters. LKS provides management, technical and legal services. According to Peck, "The short-term goal of this collaboration will be helping companies that need and desire different management restructuring to compete in a different way by helping them form a USW-Mondragon, union-coop hybrid model befitting each set of circumstances."

One of their goals is to extend the Cleveland's Evergreen Co-ops model to Pittsburgh. While the Evergreen co-ops are not unionized they are a model for this initiative in Pittsburgh. LKS will be the midwife to the conversions. Historically there was an alliance between the labor and cooperative movements. Peck sees this as the right moment to bring the cooperative and labor movements back together. Without the need to provide profits to outside capital, these firms will find that they can level the completive playing field with a cooperative advantage - highly motivated and productive worker owners; an emphasis on quality; and less reliance on middle managers and supervisors.

Chris Clamp directs the Center for Co-operatives and Community Economic Development. She is also a professor and the director of the doctoral program in community economic development at Southern New Hampshire University. She is member of the GEO editorial collective.