cross-posted from Sociocracy For All

What is Unicorn Grocery?

Unicorn Grocery is a thriving worker-owned, values-driven grocery co-op using sociocracy for its governance in Chorlton, Manchester, UK. They consist of 71 members who all work within the cooperative and are also the directors of the business. 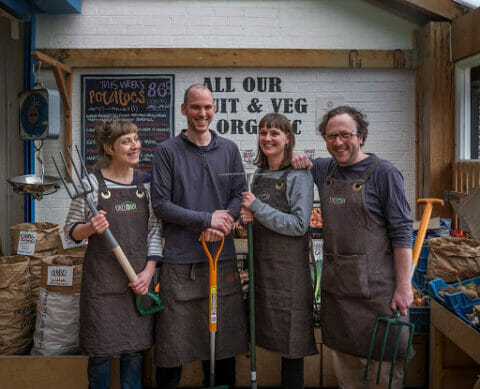 Unicorn Grocery at a glance;

Twice named the nation’s ‘Best Food Retailer at the BBC Food & Farming Awards, Unicorn Grocery offers our diverse Manchester customer base an unbeatable range of affordable, fresh, and wholesome food with an emphasis on organic, fair-trade, and local produce. Unicorn is the size of a supermarket but runs as a workers’ co-operative, owned and democratically controlled by the people who staff the shop.

"If we are providing a decent livelihood for our staff and our suppliers, if we are increasing the amount of land farmed sustainably and improving the environmental impact of our diet, if we are enabling good health through good food, if we are creating community wealth rather than shareholder wealth, if we are challenging traditional models of business ownership and control…then we are succeeding."

What did Unicorn’s co-op governance look like prior to sociocracy?

Interestingly, Unicorn’s governance structure already had many of the hallmarks of sociocracy prior to implementing it officially. They were organized into small teams that resembled circles, and they operated these groups by something approaching consent. In many ways, implementing sociocracy at Unicorn meant simply codifying what was already being practiced.

What was the reason Unicorn implemented sociocracy for its governance?

Unicorn Co-op started with a clear idea about its governance structure – it would operate a flat management structure with flat pay, the direct participation of all members in decision making, and decisions would be taken by consensus.

Unicorn’s governance model was adopted from the Blueprint for 50 Co-ops devised in 1985 by one of the founder members of the Daily Bread Co-op in Northampton, Roger Sawtell.  This model set out the foundations for the way Unicorn operates as a business – running a whole food warehouse instead of a high street health food shop, packing bulk purchased commodities on-site to add value, and operating as a flat structured worker co-operative. For this model to function as intended, Sawtell recommended growth on a human scale, with a membership of 12 to 15 people.

During 2003-2004, driven by rapid growth in sales and concomitant growth in membership,  a wholesale structural review took place and a devolved model was designed to pass decision-making powers and small budgets to teams so that decisions could continue to be taken in appropriate sized groups (i.e. less than 15 people). This structure was modeled on a wheel, spokes, and hub approach. Teams were the spokes, meeting fortnightly to manage the different areas of the business. Team spokes linked to the hub, a fortnightly Forum meeting of team representatives, and the quarterly member’s meetings were the wheel. This structure balanced the more specialized knowledge of teams and the ability to act quickly in operational matters, whilst maintaining scrutiny, strategy, and policy as the remit of the entire membership.

By 2015 the membership had grown to 60, and several teams exceeded 15 members. A structural review took place to consider how Unicorn could accommodate the increasing number of members and continue to maintain a viable governance structure.

‘We’d grown beyond the confines of the structure we had, which was implemented when the co-op was 15 people.” —Dan

At this time the co-operative membership was acknowledging that they had grown beyond their existing structure, and decision making in team meetings could be slow and frustrating for members. In 2016 a structured team was formed to begin looking into alternatives, which eventually led the co-op to discover sociocracy for governance. Interestingly, around this time a reference to sociocracy was found in old Unicorn minutes.

One member of the structure team attended a webinar hosted by SoFA in late 2017 and brought the sociocracy idea to colleagues, who became excited about the possibilities it offered to address Unicorn’s structural questions. They felt sufficiently interested in sociocracy to ask the membership to put some resources into finding out more about it.

The process was as follows:

Consent occurs in the green circles (team circles and project groups). Unicorn still uses consensus very effectively in their general meetings of the whole co-op to make decisions on strategic and co-op policies.

Today, every single member of Unicorn has had at least a half-day of training in sociocracy, and many have attended additional training sessions.

Each circle has a trained facilitator to support the sociocratic method. 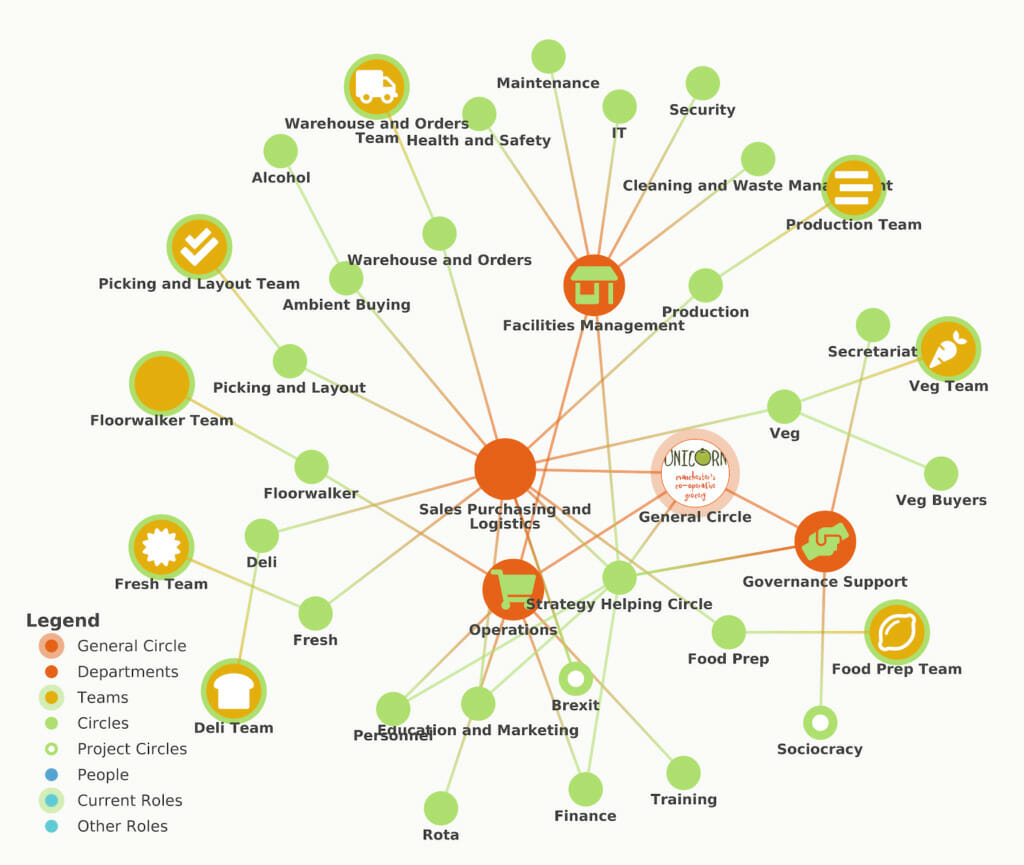 What has changed since Unicorn embraced sociocracy?

The new circles (formed out of teams), in using the sociocratic meeting framework, have become more functional. Rather than just “gathering to talk”, there is now more action, with active review leading to constant improvement.

It was noted that co-operative culture has improved with the implementation of sociocracy.

Information page on how Co-operative principles align with Sociocracy.

“Sociocratic meetings made a big difference, as the facilitator I am able to focus the circle on what can we do today to move forwards.”

Were there any difficulties for Unicorn in the change to sociocracy?

During the transition to sociocracy difficulties included: 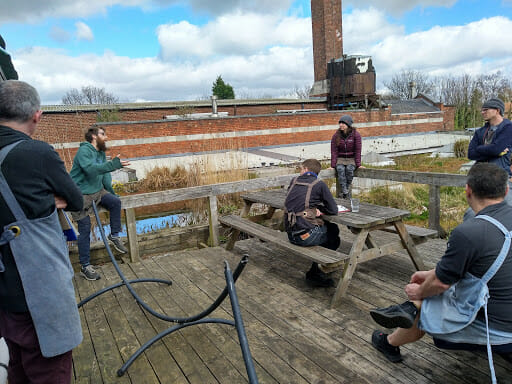 Adaptations to sociocracy for co-op governance

What were the key learnings for Unicorn during this process?

The key learnings were:

If Unicorn were to do it again, what would be done differently?

With the knowledge of where Unicorn is now, and where it was before, the implementation team would present sociocracy to Unicorn less as an all-encompassing solution that Unicorn would just “fit into”, but rather a present sociocracy as a set of tools and techniques that enhance our co-operative governance system. Largely this is because Unicorn was already fairly sociocratic in nature, to begin with.

Unicorn Grocery would have benefited from ‘renaming the jargon’ to better fit the existing ethos. For instance, the word “leader” was problematic, and thus has now been renamed “coordinator”. The term used in the previous team-based system was Overview, and this continues to be used by some members.

Is Unicorn moving forward with sociocracy? What’s the next step?

“Commitment to the continuous evolution of sociocratic governance as best fits us! We have a 25-year history of working as a successful, flat-structured worker co-op and don’t feel the need to move away from long-standing non-sociocratic elements of our governance structure. Our aim is to learn from sociocracy and make improvements while honoring our history and the elements of our working practices that are meaningful to our members.”

Currently, Unicorn operates as a sort of hybridized sociocracy. Most, but not all, smaller circles are adhering to sociocracy, using rounds and making decisions based on consent. More and more of the smaller groups will be trained up on “circle work”.

An annual circle review process is being rolled out to assess how well the new circles are working and gather feedback for any improvements and amendments.

The final step in completing the circle structure is to replace Forum with a General Circle. This is anticipated to happen in Spring 2021.

With thanks to Dan Holden, Debbie Clarke, Amy Smith, and Britta Werner.

Mondragón and the System Problem

An Alternative to Capitalist Hierarchies

Planning Must Be Centered in the Cooperative Movement

Cooperative Sociocracy — Making it Work for Your Co-op