cross-posted from Sociocracy For All

SoFA is offering a free one hour webinar on "Time management in meetings" next Tuesday, Feb. 2nd, at 1 pm EST. Register here.

For more on sociocracy and cooperatives see our issue here.

How to write up a policy draft in a group

This is a brief how-to of writing proposals, based on materials from the sociocracy handbook Many Voices One Song.

I am focusing here on step 2 in making a (policy) decision, assuming that the issue (1) and all needs of stakeholders are well understood before we start. Also, for step 3, making a decision, see this article on consent decision making.

Step 2, exploring ideas for our policy decision, itself falls into three steps.

Let’s go through them one by one.

Only begin when you’re clear about the context of the request and the needs that you are trying to meet with a policy. When that’s done, you can start. 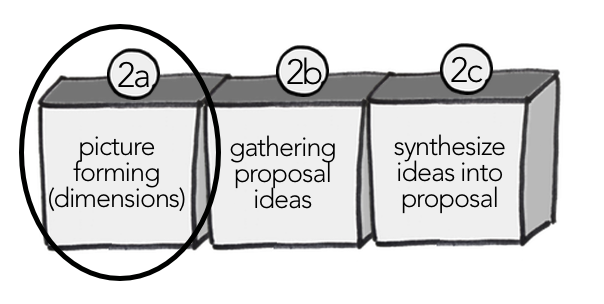 We gather a checklist of questions that need answering and other considerations to keep in mind when making policy.

For example, we might state in picture forming that “budget” (or “what’s the budget?” in question form) is a relevant consideration when coming up with a proposal.

Sometimes this step seems almost too easy to be worth doing. Yet, making a list of dimensions first makes for much better proposals. Also, it’s quite pleasant for group dynamics to start with a process where everyone agrees.

We like gathering dimensions and questions in rounds, but “pop-corn” (people speak when they have an idea) works as well.

This step is complete when all consideration (sometimes called ‘dimensions’) are written down, and no one has anything to add or an objection to a dimension on the list. Consent on completeness of the list and moving to the next step is a good transition marker. 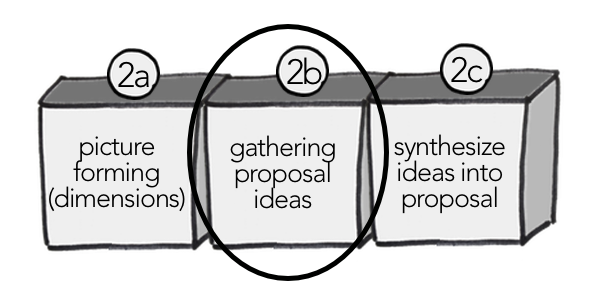 With the list of dimensions in sight for everyone, the group can now spell out proposal ideas that make a statement about the dimension. Proposal ideas can start with I think we should… or I think __ should…. For example, I think the budget should be $2500 overall, and spending should be transparent.

It’s important that proposal pieces are specific. In the above example, “spending should be transparent” is not specific enough. Define what transparent means, for example by spelling out a tracking mechanism for expenses and by naming who should have access to that.

It’s sometimes hard for people who throw out a specific idea. Some might find it pushy to advocate for a detailed idea but we see it as a great service to the group to propose something doable. Instead of holding back on ideas gather them without judgment. Anyone can always object later in the decision-making process. There is no harm in throwing out an idea. For the same reason, other members’ proposal ideas should not be dismissed or criticized right away. This step pretty much works like brainstorming. Rounds are an excellent way to gather ideas, especially if contributions are short and the group can do more than one round fairly quickly, building on each other’s ideas.

If running out of ideas, it helps to look at the list of dimensions to see if all of them are covered. Ideally, you’d want them all to be covered before going to the next step. This step is complete when no one has another idea to share. 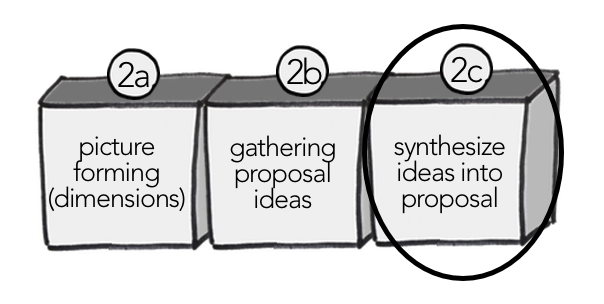 The group now has the list of proposal ideas in front of them. Sometimes all it takes is some re-ordering and cleaning up language and the proposal is ready to make a decision on.

Other times, proposal ideas are a long list of conflicting ideas. In that case, try to identify parts that are straightforward and consolidate them so you can shift your attention to the stickier aspects. It might be useful to do reaction rounds on one or two hot topics but sometimes it’s easier to move forward first and see in the consent process what rises to the level of objections. The goal is never to have a perfect proposal. “Perfect” takes too long and is not efficient. All it takes for now is good enough. Remember this policy is not cast in stone. Add a term to the proposal (for example 12 months). If the proposal seems risky, make the term shorter.

Congratulations, you have generated a proposal! All it takes now is a decision!

Adjustments for large groups or including more input

This process is optimized for a group size of 3–8 people. The same process, however, can be modified for larger groups.

Sociocracy For All (SoFA)

We are a membership organization with more than 120 members worldwide with several language groups and circles on topics like cooperatives, communities, permaculture etc.