Since its founding in 2000, worker-managed non-profit Free Geek of Portland, Oregon, has supplied over 15,000 refurbished computers to individuals and community organizations, and has also ethically recycled 2,000 tons of non-reusable computer components (known as "e-waste"). Along the way, they've also successfully reproduced their organizational model, with nine similar organizations having taken root in the US and Canada. But they've also encountered some special challenges in propagating their model, and their experience offers some important cautionary tales for co-ops and collectives seeking to do the same.

The mission statement of Free Geek states that it "refurbishes and recycles used technology to provide computers, education, and job skills training to individuals in exchange for their volunteer service. Free Geek also grants computers to schools, nonprofits, and charitable organizations." Free Geek's staff collective of 15 currently runs the organization with the help of over 700 active volunteers, and has utilized over 10,000 volunteers since it began.

In addition to helping to close its local "digital divide" by providing computers to disadvantaged people and organizations, Free Geek has fostered the development of computer repair skills throughout their community and has also been exemplary in its ethical recycling of e-waste. The organization is committed to the use and promotion of Free and Open Source Software (FOSS), and each computer that leaves its facility has Linux and other non-proprietary, Open Source software installed. 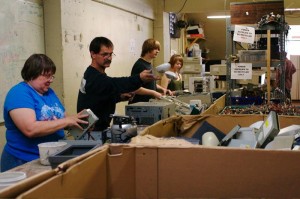 Richard Seymour, whose official title at Free Geek is "That Man Behind the Curtain", tells me that the staff collective was established shortly after Free Geek opened. "We became very well known within a few months, and got lots of volunteers and donations. When people heard about it in other parts of country and other countries, some wanted to start similar organizations, and some of them also wanted to use the name."

Early on, Free Geek committed to applying Open Source principles to their organizational model as well their software, putting many of their founding documents and policies on their website and encouraging everyone to use and adapt them. Just as Open Source software means that everyone can see exactly how it works and is free to adapt it, Free Geek's Open Source organizational model seeks to be as open as possible about all aspects of the organization's functioning. Even the upcoming schedule for their employees is public, detailing which staffers are doing what and when.

Elements of the Free Geek model include being non-profit and using Open Source software wherever possible - for example, using Linux instead of Microsoft Windows, and using OpenOffice instead of Microsoft Office. "But," Richard continues, "we'd grown organically and quickly, and we were just too busy to develop a lot of documentation. We started out loose and Open Source, and we were a little bit informal about how we licensed and managed the use of the name.

"Once someone wants to start up a Free Geek, there's a certain amount of babysitting that we have to do with the process, to really ensure they do due diligence, that they really understand what Free Geek is. It's easy for people to say, 'Yeah, I agree with that', but they don't really understand how little they understand, and then they go and try to replicate it and they end up doing something that's really completely different."

In this case, "baby-sitting" means giving lots of time and attention to the people working on the new start-up, sharing hard-earned lessons in how to run a truly transparent, truly non-profit enterprise. When someone wants to start up a new Free Geek, they may struggle to understand the principles and how to implement them in a way that is representative of Free Geek.

But this assistance also diverts resources from the mother-ship organization. "So we have to spend this energy to baby-sit that process...and that takes time away from the stuff that we have to do every day that any business would do, and that's always going to take precedence on any given day over somebody in some other state that might want to start a Free Geek, no matter how excited they are."

Thus, one of first two Free Geek "clones" is using the name but nonetheless putting Windows on some of their computers, has struggled a bit with operating like a true non-profit, and still has work to do on running their organization more openly. And the founding Free Geek has since been trying to tighten things up a bit. 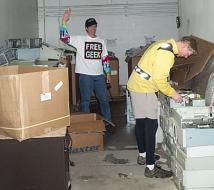 "As we've gotten older, these issues start to accumulate and we start to say, 'Oh, we've got to get more careful about how we do this - right now we're in the whole process of redefining, and hopefully coming up with an approach a bit more like [the Bay Area co-op developer] Arizmendi Bakeries (see Article on Arizmendi Bakeries in this issue), being very careful about how the name is used as a new one starts up. And maybe even be more planned about how we're going to do it, so that we select the places that are going to be Free Geeks, rather than them coming to us."

Free Geek has developed six core principles that define Free Geek, "based largely on the Rochdale principles" that provide a standard for Co-ops worldwide. In addition to having to fill out an application and get approval to use the name, emerging organizations seeking to use the Free Geek identity must also:
1. Have a mission that is similar to and does not contradict the Free Geek Mission Statement.
2. Dispose of equipment in an ethical and environmentally responsible manner.
3. Use Free/Open Source Software wherever possible and must promote the Free Software philosophy in other ways, such as transparent collaboration with others.
4. Provide low- and no-cost computer technology and training to their community.
5. Be democratically run in a non-hierarchical way that is open and transparent to all participants in its programs.
6. Be a non-profit business (as legally defined in their location) and must follow honest business practices and have the stated goal of advancing the common good.

To date, the original Portland Free Geek has successfully assisted in its own replication nine times. And it turns out that one of Free Geek's successful "offspring" is now assisting organizers who are interested in starting yet another. This start-up group has no firsthand knowledge of the original Free Geek - so the model already seems to be approaching a "third generation" of propagation. 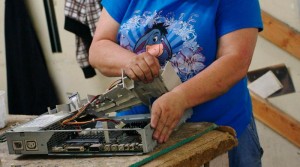 In addition to presenting an exciting new model for worker-managed sustainability, Free Geek has also confronted some very difficult issues relating to the balancing of radical transparency with a genuine need for confidentiality in certain organizational functions. The Open Source organizational model emphasizes "transparent collaboration", but organizations often deal with issue that genuinely require confidentiality - for example, personnel issues, contract negotiations, and sensitive customer information. "There's a potential conflict of principles," says Richard. "Free Geek wants to be completely transparent, but we also have to respect business confidences. Consumer co-ops have the same problem."

A similar dilemma arises when negotiating with companies that accept e-waste. Regulation of e-waste disposal is often inadequate; some unscrupulous companies are disposing of e-waste in environmentally unsound ways, and are thus able to cut their costs and charge lower prices. Ethical recyclers like Free Geek have to shoulder higher costs in order to do the right thing, and contract negotiations with recycling companies and other entities can be very sensitive. In the end, the balance is for policies and policy development to continue to be wide open, but specific practices in particular cases must sometimes be kept confidential.

In spawning nine organizations relatively quickly, the Free Geek model is demonstrating its strength and vision as a worker-managed solution to the digital divide and the e-waste problems. And in wrestling with some of the risks in propagating their model, they've affirmed for the rest of us how guiding principles and due diligence are critical to keeping our visions from going astray.

A brief, very cool video introduction to Free Geek can be found on YouTube.com.

Hitchhiking Across the Atlantic to Visit Co-ops