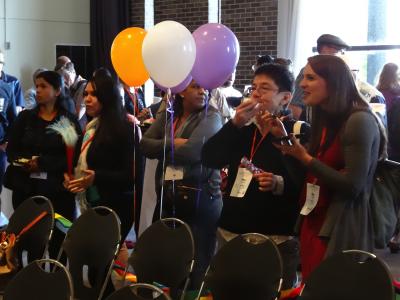 More than 450 people attended the sold-out fifth biennial conference of the U.S. Federation of Worker Cooperatives (USFWC) in Chicago at the end of May, continuing to build a movement and celebrating 10 years since its founding.

“We are working to realize our humanity,” said Ed Whitfield of the Fund For Democratic Communities who gave closing remarks with USFWC executive director Melissa Hoover. “We are trying to recapture the Commons…capture old wealth and create new wealth. We need to be true to ourselves and create the power to meet our own needs.”

Hoover, who has led the Federation since its inception, said that in order to really grow, the worker co-op movement must build alliances with other groups of people seeking change in the economic system. 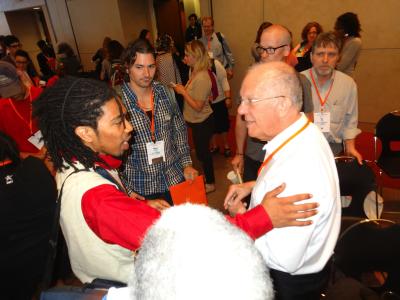 “I’m totally awed by the development of the Federation,” said Dan Swinney, who founded Manufacturing Renaissance and brings together labor, communities and manufacturers to produce innovative approaches to community development.

He suggested, however, in Friday morning’s opening keynote, that to really make a difference the USFWC must embrace small scale manufacturing. “It’s the only sector that could end poverty and build a broad-based middle class…You’re not going to do it with retail,” he said. Swinney pointed out that presently there are 600,000 jobs in manufacturing paying, on average, $75,000 per year. Manufacturing creates high enough profit margins to be able to pay for operations as well as for better wages.

He also said that 90 companies have closed because they did not have succession plans – particularly if the owner’s children did not want to run the business. These could have become worker cooperatives or other employee-owned businesses. “Companies with succession plans would be a large potential for employee ownership,” he noted.

Swinney suggested that worker cooperatives and other employee-owned businesses not be viewed as an alternative to capitalism or socialism. “Don’t create the third way,” he advised. “We need to be the only way.”

The Federation should address barriers to small manufacturing in the U.S. and ways to overcome those barriers, he said. And work needs to happen quickly, otherwise the country will become polarized between the “haves and the have-nots.” “We only have so much time,” he warned.

He also suggested that the Emilia Romagna network of cooperatives in Italy is a better model for U.S. work than Spain’s Mondragon Cooperative complex (which has probably inspired co-ops all over the world) because of its regional work in building social and economic cooperatives and ways to continue them.

ITALY’S EMILIA ROMAGNA SHOULD BE A MODEL FOR U.S. 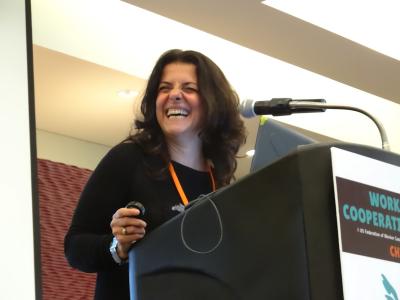 Roberta Trovarelli, in Saturday’s mid-day keynote, said that Legacoop Emilia Romagna is the oldest group representing co-ops in the Emilia Romagna region of Italy. The region is home to 5,579 co-ops, representing 8% of the country’s gross domestic product. Seventeen of those co-ops are over 100 years old, Trovarelli said.

In Italy, 90 percent of welfare is provided by social co-ops, she said. In many small villages, co-ops provide basic services, such as aid after an earthquake. Co-ops also provide 95% of cultural activities such as theatre companies, Trovarelli reported.

“In some ways, Emilia Romagna is understudied and underrepresented,” she said. “I think we should be looked [at] as we build co-ops region-wide and as a nation.” Italian co-ops donate 3% of their earnings to a fund for training and capitalizing, or raising money for cooperatives. She said the local roots are both the strength and weakness of cooperatives in Italy.

Unfortunately, Trovarelli’s presentation was cut-back due to technical issues with translation.

Jessica Gordon Nembhard, an associate professor of Community Justice and Social Economic Studies at John Jay College, City University of New York, spoke about the history of black cooperatives in the U.S. She started her keynote with a quote from W.E. B. DuBois’ and talked about his study showing 154 black co-ops or cooperative enterprises existed in 1907.

“It is now our business to give the world an example of intelligent cooperation so that when the new industrial commonwealth comes we can go into it as an experienced people and not be left outside as mere beggars….If leading the way as intelligent cooperating consumers, we rid ourselves of the ideas of a price system and become pioneer servants of the common good, we can enter the new city as men and not mules.”—W.E.B. DuBois

Gordon Nembhard also stated that 19 Blacks were among 39 who traveled to Canada to learn more about co-ops in 1938, and she cited Black leaders during the civil rights movement such as Ella Jo Baker, Fannie Lou Hamer, Congressman John Lewis and others who had ties to cooperatives – either having jobs to organize them, or having started them. In addition, groups like the Brotherhood of Sleeping Car Porters and their Ladies Auxiliaries started co-ops as a means of economic survival. Gordon Nembhard said that mutual aid societies and collective processes like the Underground Railroad were cooperative actions and precursors to co-ops.

The main conference was preceded by special sessions early Friday, May 30th for small business owners selling to their workers, and a strategy session on capital access and community economic development. That night, a community showcase of cooperatives took place at the SEIU Healthcare hall. The showcase opened with a performance by Circles and Ciphers, spoken word by young men. A brand new co-op, Chicago Loop Catering, catered the Showcase as its inaugural job. Darryl Fuery spoke about its beginnings. 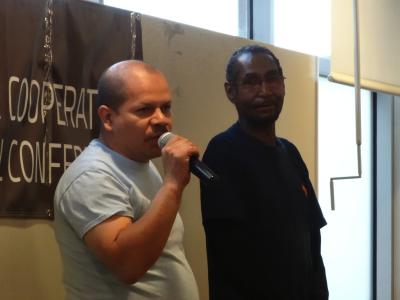 Armando Robles talked about a group of workers at New Era Windows Cooperative (formerly Republic Windows and Doors) forming a worker cooperative and the hard times over the winter as they occupied the warehouse. The workers formed a worker cooperative in 2008 after the owner was found to have lied about finances and did not pay the workers. Now the co-op is working on selling across the country.

Five students who studied alternative medicine at the same school decided to form a worker cooperative because “all of us wanted to do some social justice work,” explained one member-owner. “We wanted to reach people with our work who couldn’t afford it.” Sage Community Health Collective opened six days prior to the opening day of the conference providing alternative care using acupuncture and Chinese medicine. “We’re excited to be a part of the Chicago Co-op community,” said one of the owners. 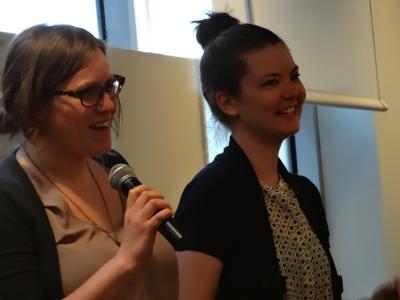 Café Chicago, a co-op that came out of the Latino Union, was founded by daily workers. He said the union was the only organization in the Midwest to work way day laborers and domestic workers, who do not have minimum wage protection. He added that today there is a 66% chance these workers will not be paid by the people who hire them.

“We’re seeing this [cooperative organizing] as our future,” he said. “We have to build the cooperative movement. We’re excluded from work because you don’t have papers or because of the color of your skin.“ Recognizing the exploitation and low wages of women, Café Chicago co-op is committed to only buying coffee from women cooperatives, he said.

“I believe democratic economics is the route to liberate us all,” said Sequane Lawrence, board member of the Center for Workplace Democracy. “It’s a life or death struggle for us…We want the rest of the world to join us in this struggle. We have to create a world where we look out for the people with the least.” He added that that Chicago is populated by two-thirds people of color. 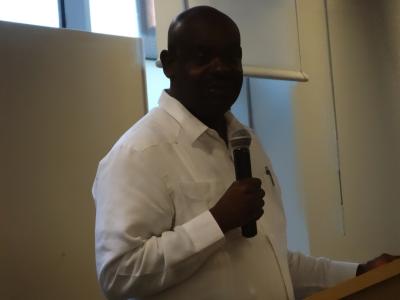 At the end of the conference, Darryl Fuery of Chicago Loop Catering Co-op, who had just left a workshop of funding cooperatives, was ecstatic about having participated in the conference.

The conference -- with 35 workshops -- left him and his new co-op more prepared to lay the ground for expanding the movement by allying with other groups, building a grassroots funding strategy, and doing policy work.

As Rebecca Kemble, President of the US Federation said at the member meeting: “Here we are in Chicago at 10 years old.” Now we have “to really build a movement with legs, teeth, fighting form and power.”

CHICAGO – THE LARGEST EVER CONFERENCE

The 2014 Worker Cooperative National Conference was a resounding success, drawing five times the number of participants as 2004's inaugaural conference. In his keynote address, Dan Swinney said that the potential for fundamental change in our society is greater than at any other time in our history over the last 100 years.

“It’s both a promising time but a dangerous time.  Who leads this change will determine the values that govern our society.  It can continue to be a time of greater and greater inequality, of increasing poverty, and increasing environmental degradation," he said.

“Or it can really be a new era of sustainable and restorative development.  As you master the complexity of democratic management, of the flows and ebbs of your companies, you must invest a part of your time in building a broader transformative movement in our society and build the US Federation of Worker Cooperatives to be a recognized leader in that transformation.”