A Worker Co-op for Returning Citizens 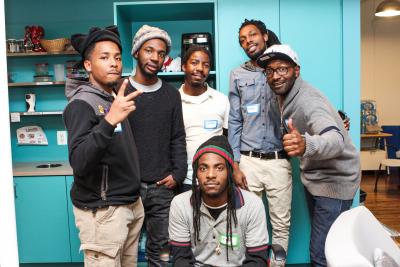 It’s more than just a business to Juan Reid, a former inmate who co-spearheaded the cooperative. For him, Tightshift is about helping former inmates recover, find work, and counter prisoner stigmatization in the workplace.

Reid, 36, was sentenced to 14 years in prison for aggravated assault when he was just 18 years old. He spent the last seven of those years in solitary confinement, an experience he says was torture and a form of “dressed-up” slavery. When he returned to his Bloomingdale neighborhood, he noticed he was being punished a second time—this time by employers who wouldn't hire him because of his criminal record.

Unbeknownst to his family, Reid became homeless. On the freezing morning of Jan. 21, 2015, a winter storm was passing and Reid was sleeping in a van. It was his 34th birthday.

His mother called him on his cellphone to wish him a happy birthday.

“She told me she was proud of me,” Reid says. “She thought I was OK, but I wasn’t. I wasn’t going to tell her, though. I just didn’t want to be a burden to her.”

But his mother’s message reassured him that his family still loved and cared about him. He moved back in with his father and a few months after that, he met Allison Basile while walking through the neighborhood. They don’t remember what sparked their initial conversation, but they quickly found out that they had at least one thing in common—they were both fed up with economic inequality and systemic racism.

Basile, 30, had a history of working with nonprofits and developing co-ops, although she hadn’t worked with returning citizens before.

She told him about business cooperatives, and the idea of an employee-run business enthralled him. He wanted to join the movement. The two traveled to New York for a seminar to learn more about the inner-workings of co-ops. Back home, they received two microgrants from the Diverse City Fund in Washington, D.C., and crowdsourced $6,500. With this money, they launched Tightshift late last December.

Reid plans to visit jails to recruit new members. He wants to assure them that they’ll have jobs once they get out. In addition to that, he canvasses the streets, soliciting friends and youth in his neighborhood to join Tightshift.

“I’m focusing on ways to shift ownership and control.”

New members must first go through the member-apprentice program. In that program, newcomers learn the workings of the cooperative and receive training. They earn $14 an hour and have a voice in the decision-making. Newcomers complete the program by accumulating 1,000 work hours, which Reid and Basile expect would take about a year to complete. Members then can buy into the co-op, receiving a $3 pay increase.

But it hasn’t been easy getting people to finish the apprenticeship. Sixteen people have started the program, but only five work actively with Tightshift. Consequentially, Reid and Basile are the only official member-owners of Tightshift. A big reason for that, Basile says, is that a lot of the apprentice members deal with trauma. One apprentice-member, for example, was incarcerated at 18, watched his best friend get killed, and is now battling drug addiction.

“We love him and want for him to be able to keep working with Tightshift,” Basile says, “but we know he’s going to need some time and space for healing in order to be able to do that.”

A residential healing center is something Basile and Reid are working to establish to help apprentice-members physically and emotionally recover from trauma, especially from incarceration.

To that end, Tightshift is launching a crowdfunding campaign to raise money for providing its member-apprentices with healing spaces and resources.

“There’s a lot of trauma we have to deal with when you go through the prison system,” Reid says. “Our new apprentices will live in the healing center, so they can just work and heal.”

This article was funded in part by a grant from the Surdna Foundation.

Editor’s note: A previous version reported that Reid is currently recruiting Tightshift members in jail. But, more accurately, he is currently in the planning stage to recruit. This version has been corrected.

Published under a CC BY-NC-ND 4.0 license

J. Gabriel Ware wrote this article for YES! Magazine. J. Gabriel is a solutions reporter at YES! Follow him on Twitter @JGabinator.