A Small Village, A Unique Book, and An Innovative Learning Community

Yes, dear Readers, there is a place filled with Public Hope, a place in Spain far more tangible than Kris Kringle or Santa Claus. 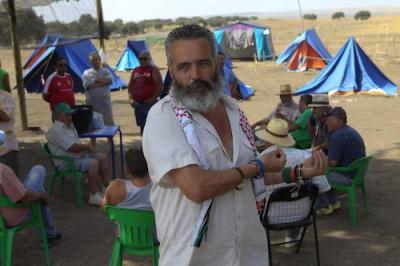 The place is Marinaleda, a town of less 3000 residents, located in Andalusia, a southeastern province within Spain. A really fine article by Liam Barrington-Bush and Jen Wilton describes it as a village where “people come before profit”, and which is run on principles of “mutual aid and direct action”.

Part of what this means is that there is virtually no unemployment in Marinaleda. How this has happened, especially as unemployment throughout Spain is well over 25%, is a long and complex story, beginning way back when the Franco dictatorship fell apart in the 1970s. On one hand, there is the town’s “cooperatively-owned olive oil factory” which provides decent wages for many Marinaledas, and these are supplemented by a strong safety net for all residents. In addition, its continuously elected Mayor, Juan Manuel Sánchez Gordillo, has both advocated and practiced “direct action” in order to turn land owned by remote aristocrats over to ordinary people, and, in one highly publicized case, to appropriate food from supermarkets and bring it to local food banks. According to Gordillo, this was not theft, because, he claimed, “food in the 21st century, is a right, not something on which to speculate”.

The same Mayor has made it possible for anyone to build their own home within the town’s borders, and to eliminate foreclosures, which number close to 700,000 in the province of Andalusia alone. His solution: everyone can build a house for free, using materials and qualified workmen provided by the town itself. The only cost is about $20 a month as long as the owners occupy the house, and they cannot profit by selling it on the market. “We need to rethink our values, the consumer society, the value we place on money, selfishness and individualism,” Gordillo remarks, adding that  “Marinaleda is a small example, and we want this experience to extend throughout the world.” No wonder he is widely known as the “The Spanish Robin Hood”.

But while all of this is remarkable, and can take us a good distance towards public hope, there’s something even more exceptional happening in Marinaleda. Something the people themselves, and not just their Mayor, have grown and nurtured: a divergent culture which encourages and supports everyone’s participation in shaping how the town is run, where every resident’s voice counts, and where power and authority are exercised as much or more by the governed than by those who occupy official positions. Here’s how Bush and Wilton describe this unorthodox culture.

When money hasn’t been readily available…Marinaleños have turned to one another to do what needs doing. At times that has meant collectively occupying land owned by the Andalusian aristocracy and putting it to work for the town, at others it has simply meant sharing the burden of litter collection. While still operating with some degree of central authority, the local council has devolved power into the hands of those it serves. General assemblies are convened on a regular basis so that townspeople can be involved in decisions that affect their lives. The assemblies also create spaces where people can come together to organize what the community needs through collective action. “The best thing they have here in Marinaleda, and you can’t find this in other places, is the [general] assembly,” says long-term civil servant for the Marinaleda council, Manuel Gutierrez Daneri. He continues: “Assembly is a place for people to discuss problems and to find the solutions,” pointing out that even minor crimes are collectively addressed via the assembly, as the town has no police or judicial system since the last local cop retired.

OK, but can that really happen here, or anywhere other than Marinaleda? Is it perhaps an anomaly, not reproducible outside of this tiny village? 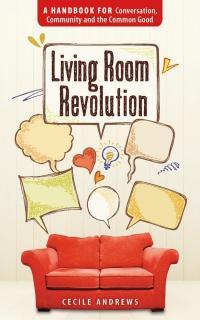 Cecile Andrews doesn’t think so, and her wonderful book, Living Room Revolution (LRR), is filled with guidance on how to create a culture where everyone counts, drawn from her own experience in fostering in this country what has become manifest in Marinaleda. LRR is a book, I believe, that any other town or community can use to emulate that extraordinary village.

Cecile’s primary notion is that of “convivial community”.  To the question, “How do we create change through community?”, she responds:

When I do workshops, I ask the participants to recall times in their lives when they experienced community, and to reflect on how it felt. As I listen to their responses, the word that always comes to mind is conviviality — the quality of being companionable, congenial, agreeable, and amiable. [Conviviality is] an energy that involves people and bathes them with good will. It’s a concept that points the way in our search…to nurture caring, collaboration, and concern for the common good….For social change, then, creating convivial community is where we start — not as a separate thing, but in anything we do. (my underlining)

But Cecile does not stop with concepts, however instructive or insightful. LRR lives up fully to its sub-title — A Handbook for Conversation, Community, and the Common Good. It provides us with example upon example, varying in size and substance, of social change generated by conviviality. Here’s one such example:

When we’re working for social change, we often forget the importance of community. We focus on goals. We’re here to win an election, to save the old-growth forest, or to get people to drive less. But the change doesn’t happen or it doesn’t stick because the change isn’t linked to community….

But it doesn’t have to be that way. No matter what you do, make sure people get to know each other and talk with each in a congenial way. For instance….take time to move around the room and greet people. Start your meeting with a “check in”. Periodically have small-group discussions…so that everyone gets to talk and make closer contact with others. Hang around at the end for convivial conversations. Periodically have pot lucks. Make the meetings enjoyable…

And LRR is also filled with many useful lessons gleaned from Cecile’s own practice of convivial democracy and that of others; e.g., eleven suggested guidelines for the “Art of Conversation”, including “Take the Risk of Saying What You Think or Feel”, “Appreciate Others”, “Listen”, “Ask Good Questions”, and “Laugh Freely”. Two chapters swiftly follow on sustaining focused and civil group conversations, and others later describe deeply democratic forms of People’s Education and ways of Remaking a Counterculture. Each of her twelve chapters offers a different, well-researched, and clearly described path by which ordinary folks, through convivial community, can creatively “discuss problems and find solutions”, rather than depending on distant and unaccountable officials. “At heart”, Cecile claims, “we are all teachers”, willing to “nurture, inspire, guide, challenge, and support others by talking with them”. Quoting Thoreau, she adds,  “We are all school masters, and the universe is our school house.”

Learning About Public Hope by Helping to Create It

The first Public Hope column featured several amazing stories written by students of the Community, Liberation Psychology (CLP) program of Pacifica Graduate Institute; these were written for the 2014 CLP Newsletter, “Hearing Voices”. Their 2015 Newsletter is now available and the voices which speak through these new stories are no less amazing. And there are even more of both these voices and their stories.

The titles below will give you a sense of the challenges faced by CLP students as they learn how to nurture public hope and convivial community together with groups routinely discounted and oppressed. This is learning of a sort largely unknown in academia – learning by doing, by helping to create convivial community, and by learning from the wisdom of those to whom you offer collaboration.  Below are some titles that resonated with me, but I found all of the students’ stories to be both examples and sources of public hope. And all of them echo, in their own original ways, the same message: "If you have come here to help me, then you are wasting your time...But if you have come because your liberation is bound up with mine, then let us work together.” (Aboriginal activists group, Queensland, 1970s.) 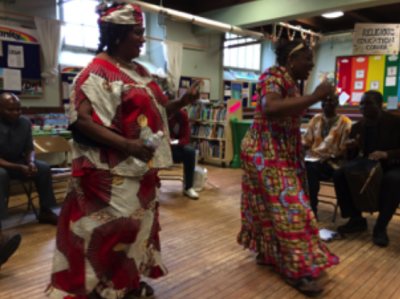 The Arts and Community Change:
Gifts from Inspiring Young Leaders
By Aaqilah Islam (Photos via the May, 2015 Hearing Voices Newsletter)

Make sure you do not miss the very last item in this year’s Newsletter, which features a dialogue between two faculty members of CLP, Susan James and Helene Shulman Lorenz.  In it you will find many of the core ideas of their hope-filled program reflected on in depth, ideas which the newsletter introduces in these broad terms:

To study community and ecopsychology in the light of liberation psychology is to commit to the exploration of the profound effects of injustice, violence, and the exploitation of others and nature on psychological, community, and ecological well-being. It is a commitment to transformative practices aimed at social justice, and ecological sustainability, to sumac kawsay/buen vivir and ultimately peace and reconciliation.

In this newsletter, you will see these ideas in action, embodied through the work of students and faculty!

In short, Public Hope has come alive in diverse forms, even ones that contrast, and even conflict, with one another. But is that a problem or an opportunity? Let me know what you think….