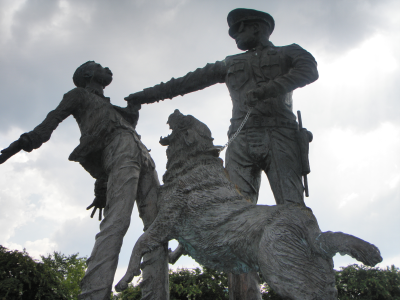 The South is the poorest part of the USA. The election of a Black president did not alter this fact. The ongoing national and global economic crises have only intensified this reality. The historic patterns of oppression and exploitation dating back to the theft of this land from its original inhabitants and the importation of Africans who were forced into chattel slavery remain in subtly altered and sometimes crudely familiar forms. Additional features including the immigration of indentured servants who worked out a variety of terms of servitude, the settling of Europeans fleeing various oppressions and seeking opportunities and more recently, the immigration of our neighbors from south of the border seeking a better way of life leave this area lacking in the wealth that is needed to support human needs and elevate the area’s standard of living. Coupled with the social attitudes and acts of a criminal justice system that make the murder of Black children legal (i.e.Trayvon Martin) we continue to fight for a way out of Southern bondage. As long as we accept the current economic structures and approaches to development that flow from those structures and paradigms, we can’t get out of bondage.

As long as we do not create opportunities for everyone to be productive, we can’t get out of bondage.

As long as we do not stop legitimizing a system that only cares about maximizing profit we can’t get out of bondage.

As long as we cannot find ways to identify and attract existing pools of capital and move toward owning and controlling pools of our own, then we can’t get out of bondage.

When we are productive, we produce a surplus.  We must retain that surplus to enhance and increase the productivity of our labor as well as create more productive opportunities.  Our communities will then be able to meet our needs and continuously improve the quality of life for the community members.

For too long, the South has been a source for the extraction of raw materials and wealth. Early on, enslaved people themselves were produced and exported along with tobacco, timber, cotton, coal, and now, oil and natural gas. The wealth produced by this exploitation of the earth and our people did not mainly stay in the South. That wealth which did remain was not democratically controlled for the benefit of the people, but rather was privately held and became the basis for deeper entrenchment of the system of exploitation. The mechanization of agriculture changed the needs for labor, but it did not change the nature of the wealth extraction process. 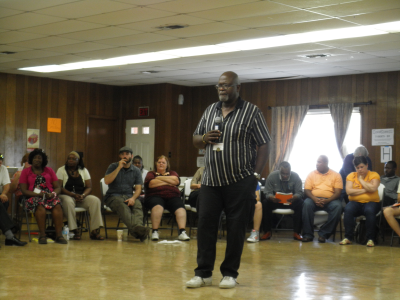 Every possible social contradiction between people has been and continues to be utilized to weaken our ability to resist this exploitation. The most obvious and dramatic division has been race, pure and simple, but there are other distinctions that are being opportunistically utilized. The differences between hill people and valley people, woods people and swamp people, and now English speakers and those who speak other languages, the native and the foreign born,  have been and continue to be used to tighten the grips of exploitation. The organizing needed to oppose exploitation is made more difficult, but not impossible by the use of these differences. As the crisis intensifies, there is a growing realization that folks need to fight together, rather than fight each other. The near win in the UAW organizing drive in Chattanooga, Tennessee, and the ongoing union drive at the Nissan plant in Canton, Mississippi show that new labor successes are on the horizon.  But the struggles over wages, benefits, hours and working conditions are struggles only over the relative size of the surplus extracted. Even with the needed victories for unionization, still, the very nature of this economic system guarantees that the extraction of wealth and its accumulation in elite hands takes place.

Although it will require us to learn how to work together and how to decide together, democratic ownership and democratic governance hold the keys to new possibilities. Wealth creation is cumulative. Its value is compounded over time. Community wealth should be stewarded democratically by the community. Community wealth should form a new commons where the whole community can benefit from the labor of the past. The community’s right to control its wealth flows from the social nature of its production. It was a product of people working together and producing a surplus together. A system where wealth is socially produced and then privately appropriated is inherently unfair and exploitative.

The creation and growth of cooperative enterprises – enterprises that are democratically owned and democratically controlled – gets us on the path toward job creation, wealth creation, wealth retention, democratic ownership, and democratic economic decision-making. This is what is needed to end Southern bondage and this is what we are working on with our cooperative efforts. We are finding a growing interest in these alternatives to the status quo. The South that stood up to Jim Crow laws, the South that “spoke truth to power”, now finds itself pondering how to be further true to ourselves and become the power necessary to build the economy that will meet our own needs. The future for this struggle is bright.

Ed Whitfield is a musician, writer, and raconteur in Greensboro, North Carolina. He is co-directer of the Fund for Democratic Communities where he is working to build more democratically-based collaborative economic structures.