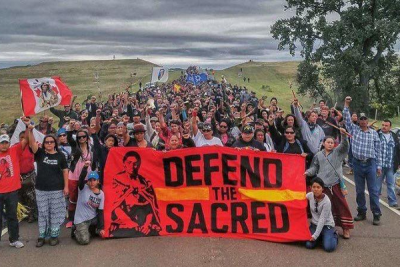 Our “Stand with Standing Rock” at Cooperative Federal Credit Union isn’t our first social and economic justice action.  Not by far -- that would be the defunding of South African Apartheid institutionalized racism and segregation in 1982 that we were founded upon (Apartheid received significant opposition from global economic justice movements).  The $30 pooled together by local activists in Syracuse led to $100,000 in start-up funding pledges from residents which led to NCUA recognition (National Credit Union Association formal charter as a federal credit union) on February 18 of that year.  Small is beautiful and in this case starting small has led, with commitment and sustained effort, to something much more.

Our current “Stand” also will not be our last as evidenced by the ongoing participatory democracy and economic activism we have engaged in over the years.  When I moved to Syracuse in 2005 I immediately looked for the most grassroots financial institution that I could find to become a member and move my out-of-town accounts to.  Little did I know that Coop Fed (as it is locally referred to and pronounced either “Co-op Fed” or Ko͞op Fed) was much more than just a cooperative member-owned credit union.  It was also one of the long-standing anchor organizations at the heart of the social and economic justice community here in Central New York.

Although I had long been a proponent of credit unions, remembering how my family was a member of Mon Marine Credit Union (currently merged and operating as Frick Tri-Valley Credit Union [1]) my whole life through my father’s employment on Monongahela Railroad, I had not imagined that a credit union could also be such a voice for progress.  In my time since joining the Credit Union as a Board Member in 2010 (Currently President since 2011) we have most recently stood up publicly for people over profit and against the TPP, THE General Body student movement at Syracuse University,  and the Occupy Wall Street movement; as well as donated a portion of debit card fee revenues every year to local social and economic justice organizations.

In addition to making statements of solidarity with justice movements, Coop Fed has been helping the underserved on the regular for 35 years with our financial tools, including:

All this leads to my belief/theory/call that everyone in the social, environmental, or economic justice movements should be active credit union members for the following reasons:

Long-Term Community and Organizing Outlook - Credit Unions are anchors in communities because they are where your money is.  People tend to care and participate more when they have “ownership” or a piece of themselves committed.  Identity and issue movements based upon current events tend to come and go, ebb and flow, but not Cooperative Federal and other CDFI credit unions.  We’re steady and stearn and anchored.

Pre-figuration - That fancy word for practicing what you preach.  Practicing the types of institutional democracy we want to see is important if we are to build a movement of educating skillful members and activists.  Cooperatives such as Cooperative Federal CU offer opportunities to vote, serve on the Board, serve on committees, and help initiate proactive activism.

Mission-based opposed to capital-based - we put our money into community, lending, etc not into pocket-books of the 1%.  That’s a simple message that has resonated with many since the Occupy movement and is growing stronger thanks to recent political campaigns such as Bernie Sanders and Jill Stein.  We go as far sometimes as having over 100% of our capital in the community in the form of loans, thanks to the practice of secondary capital acquisition.

Our donations of new account fees ($10 each) in December for those moving their money to Cooperative Federal due to the #DefundDAPL movement, along with a $100 general fund donation and individual donations from each of our board members, will result in over $1,000 to support the Water Protectors in North Dakota.  This donation is a small step and a short-term contribution to changing the world.  Joining a CDFI credit union is one of the few long-term contributions you can make to social and economic justice, and one of the easiest.

[1] Mon Marine was located in Brownsville, PA south of Pittsburgh and was formed in 1941 primarily for employees of the transportation industry.  My father worked as a lineman and then as a trainman on Monongahela Railway which has since become Conrail and now Norfolk Southern.

Frank Cetera is President of the Cooperative Federal Credit Union.

The Gift Economy of Standing Rock