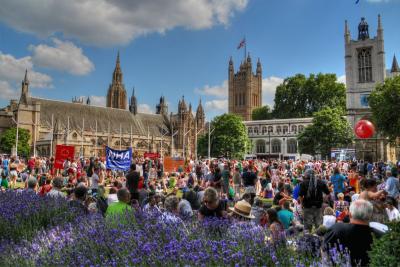 cross-posted from Doc Next Network

The world seems to be flooded by an unending wave of indignation and political unrest. The media sphere extends beyond the printed press and television news, into our personalised social networks, evoking a constant stream of images: fluctuating markets, stagnating economies, vibrant multitudes, insurgent violence. It is all too overwhelming to take in, as the simultaneity of events reduces voices to indistinguishable frequencies in a wall of noise. It’s as if anything can spark widespread revolt, like a park in Istanbul, a squat in Barcelona, or the price of a metro ticket in Rio de Janeiro.

The Radical Democracy: Reclaiming the Commons project tunes out the broader context of global unrest and tunes in to the local level at which the protests take place, so we may hear the common theme that binds them. That theme is citizens seeing their right to decide what kind of communities they want to live in denied by faceless processes far-removed from local reality, and certainly not accountable to it. As social ecologist Murray Bookchin once put it, “city space, with its human propinquity, distinctive neighbourhoods and humanly scaled politics—like rural space, with its closeness to nature, its high sense of mutual aid and its strong family relationships—is being absorbed by urbanisation, with its smothering traits of anonymity, homogenisation, and institutional gigantism.”

In the midst of the wildcat general strikes and decentralised occupations that defined May 1968 in France, the sociologist Henri Lefèbvre wrote that these types of protests were claiming peoples’ “right to the city”, which he defined as a demand for “a transformed and renewed access to urban life”.

In more recent years, David Harvey has revived the concept, writing that:

The right to the city is far more than the individual liberty to access urban resources: it is a right to change ourselves by changing the city. It is, moreover, a common rather than an individual right, since this transformation inevitably depends upon the exercise of a collective power to reshape the processes of urbanisation.

These concepts, together with the understanding that protest is fundamentally a form of caring for our communities, are what guide Radical Democracy: Reclaiming the Commons. With support from the Open Society Initiative for Europe and the European Cultural Foundation, the project highlights and empowers social agents who are proposing radical changes in the way society participates in common spaces. These social agents come from Poland, Spain, Turkey and the United Kingdom. The goal of Radical Democracy: Reclaiming the Commons is to increase the visibility of their local struggles and maximise their social impact using the networked medialabs of the Doc Next Network to produce socially engaged media with a lasting impact on public debates.

Poland: Opening the heart of the city

In the heart of Warsaw, tucked away in the lush green tangles where John Lennon Street meets Jazdów, lies a community of small rural houses. Established by the USSR in 1945 as a part of Finnish war reparations, they form an enticing island of tranquility in the capital’s urban landscape, and a living monument to the city’s 20th century history. Yet in recent years, city officials have decided that they would rather replace this area with the glass skyscrapers so typical of large city centres. In response to this, social activists responded by organising Otwarty Jazdów (Open Jazdów), a grassroots initiative that includes current and former Jazdów residents, community organizations, local activists and young politicians trying to stop the demolition of the houses by promoting Jazdow as a common space for the city’s inhabitants. It is a process that is similar to what activists are doing in the neglected, formerly industrial Ursus district. Starting in 2012, people in this district have been organising actions that criticise the urban decay it has been subjected to, informing the public of residents’ unmet needs and promoting the district’s history through the bottom-up creation of a Social Museum. As each of these campaigns uses the institutional and grassroots tools at their disposal in their disputes with city officials, Radical Democracy: Reclaiming the Commons will help amplify their message so that they can achieve their goals.

The neoliberal city is the motor of Erdogan’s Turkey. Its booming economy is the result of a massive construction bubble fed by mega-projects operating on a city- and even country-wide scale, and the increasing surveillance and repression of dissent are constant reminders of the authoritarian impulse behind this urbanisation. It is a transformation that is having profoundly inegalitarian results, with middle-class flight into gated communities, deteriorating public facilities and increasing insecurity in the streets beyond the gates. In these circumstances, making the city liveable can be a form of dissent. Sokak Bizim (“Streets Belong to Us”) is an NGO focused on human-centred cities and streets in Istanbul, which they engage from the perspective of pedestrians, cyclists, children, elderly and disabled people. They are best known for their “Streets Belong to Us Once a Month” events, in which they transform lifeless spaces subsumed by the functionality of neoliberal urbanisation into festive ones, to promote community-building activities and create common spaces for citizens. Radical Democracy: Reclaiming the Commons intends to amplify Sokak Bizim’s message through the work of its networked medialabs and interaction with the other local hubs.

United Kingdom: Finding a home in the city

In London, urbanisation is pricing citizens further and further away from the places they called home. Housing prices have soared recently by up to 20% from one year to another, yet nearly 12% of residents have too few rooms in their dwellings for the number of people living in them. As waiting lists for council housing grow endless, council housing itself is being privatised along with social housing. Though some policymakers and urbanists consider this to be just another part of a process of “urban regeneration”, many citizens are fed up with their powerlessness and the lack of rights for renters. In some cases, they have begun to organise and disobey. In Hackney, squatters occupied the Central Police Station citing that they simply could not find affordable housing. And many of the squatters who occupied Carpenters Estate in the fall of 2014 cited a lack of social housing as the motive behind their occupation. As London’s housing and renters’ rights movement progresses, Radical Democracy: Reclaiming the Commons seeks to both champion and connect London’s often disparate tenants organisations, and respond to the city’s increasingly polarised housing market.

Spain: Taking back the city

For the last several years, Spain has been a laboratory for bottom-up organisation and empowerment. The 15M movement that began in 2011 not only managed to set the political agenda by framing the euro crisis and austerity as contrary to democratic principles, but also generate countless neighbourhood assemblies and amplify pre-existing assembly-based movements, such as the multicoloured mareas (tides) for social rights and the Plataforma de Afectados por la Hipoteca (the PAH or Mortgage Victims’ Platform). However, the ability of these movements to gather support from the vast majority of the country’s population did not translate to much in the way of institutional change, despite their efforts to use all of the formal mechanisms at their disposal. As people grew increasingly frustrated with the indifference of the political class, many began to perceive an institutional glass ceiling. Thus, 2014 saw the emergence of new electoral experiments that not only spoke the language of the post-2011 social movements, but also contained some of their most familiar faces. This is especially true in the case of Guanyem (Catalan for “Let’s Win”) Barcelona and Ganemos (Spanish for “Let’s Win”) Madrid, municipal candidacies composed of prominent activists, community organisations and some political parties, which seek to activate citizen control in Spain’s two largest cities through a bottom-up politics of proximity and direct democratic practices. Radical Democracy: Reclaiming the Commons will document this process as experienced by the ordinary citizens it engages.

Over the coming months, Radical Democracy: Reclaiming the Commons will act as a microphone for the voices involved in all of these local struggles. By doing so, and by offering a common framework for interpreting what these apparently local struggles mean at a more global level, the project hopes to lower the volume on the noise that currently dominates the media sphere to offer the clarity needed to take steps towards making radical democracy a common reality.

Shared under a CC BY-NC-SA 3.0 license