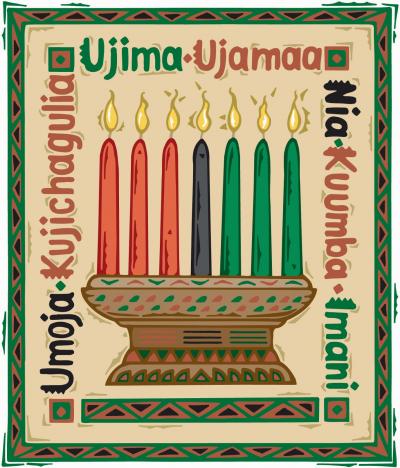 This initiative is an attempt to focus the attention of African Americans, and especially community builders and organizers, on the potential value of the practice of the Nguzo Saba or the Seven Principles of the holiday of Kwanzaa as social and economic community development tools. These principles or values may be used to free us from oppression in this country as well as offer another model of economic development that meets people’s needs, develop worker ownership and control in their place of work, and builds the capacity of the citizenry to participate collectively and democratically in running the organizations and institutions that have an impact on their lives. The Nguzo Saba or the Seven Principles of Kwanzaa offer us the opportunity to practice them through cooperatives as economic and social development organizations. We have put forward a number of suggested topics that you may use for each day of Kwanzaa, so as to highlight their communalistic elements and relevance to our need for economic and social empowerment. A list of resources for cooperative education and development is also provided.

Economic and Social Context of Underdevelopment 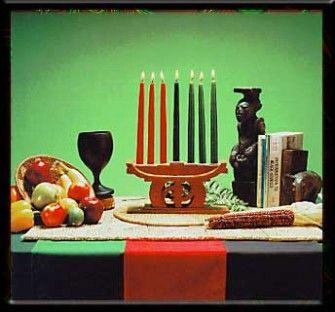 In the United States, non-Anglo ethnic businesses are more likely to, or predominantly employ people from their respective communities. If more African Americans participate in the economy as owners, it could put a dent in the level of unemployment that we experience. Historically, the African American unemployment rate in the United States is usually about twice that of the general population.

The promotion of cooperative entrepreneurship could help us move from under the jackboot of discriminatory employment practices, and governmental neglect of the communities in which we live. According to an edition of the USA Today publication, (November 16, 2004, 4B), “African Americans’ spending clout is due to hit $723 billion this year [2004].” [now $1.2 trillion, according to Nielsen -ed.]  Therefore, the foundation exists (especially with the reality of residential segregation) for us to engage in a group economy approach to economic development. In the 1930s, W.E.B. Du Bois put forward the idea of a self-enclosed cooperative economy as a way to overcome racist oppression and exclusion, as well as provide a non-capitalist model of economic development. Today we are faced with similar Depression-era social and economic problems, which beg for collective action and solution.  The economic model of “Black capitalism” that was advanced by the Nixon administration in the 1970s (and by others since that time) has not shown itself capable of changing the adverse socio-economic condition of the majority of African people in America.

What is a Cooperative? 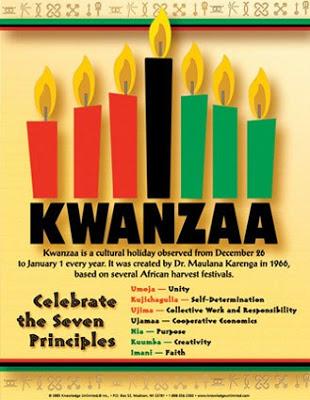 A cooperative, according to the International Cooperative Alliance, is an autonomous association of persons united voluntarily to meet their common economic, social and cultural needs and aspirations through a jointly-owned and democratically-controlled enterprise.

Cooperatives may be used to organize the provision of goods and services in any sector of the economy. In the United States, this member-owned economic and social organization is used to operate day care centers, housing communities, supermarkets or grocery stores, hardware businesses, worker-owned and controlled companies, processing plants for agricultural produce and commodities, and financial institutions (credit unions, insurance companies). Cooperative economics is truly a transformative ideal, which asserts that the primary reason for starting a business is to meet the needs of its members or the community, and not just to make profit. Cooperatives strive to make a surplus or profit, but it is done to provide more services and benefits to their members. Each member’s share in the surplus or profits from the operation of the cooperative is in direct proportion to your participation. It may be measured by the number of hours worked or the dollar value of her or his purchase of goods or services from the cooperative. This is the hope and promise of a better tomorrow that cooperatives represent to humanity today, and for those of us who practice cooperative economics.

There are seven principles that comprise our cooperative identity as cooperators: voluntary and open membership; democratic member control; member economic participation; autonomy and independence; education, training and information; cooperation among cooperatives; and concern for the community. These principles are very much consistent with those that are celebrated as a part of the holiday of Kwanzaa.

The holiday of Kwanzaa was created by African American Studies professor, Maulana Karenga, in 1966. It is a holiday that is now practised by about 28 million Africans throughout the world from December 26th to January 1st.  Kwanzaa promotes seven principles which are its core, and is known as the Nguzo Saba: Umoja (Unity), Kuchigulia (Self-Determination), Ujima (Collective Work and Responsibility), Ujamaa (Cooperative Economics), Nia (Purpose), Kuumba (Creativity) and Imani (Faith). It is our desire to work with Kwanzaa organizing committees across the country to facilitate the education of the African American community about how cooperatives are an expression of our cultural traditions, and social and economic history. Furthermore, we would like to highlight the long history of our involvement in cooperative lifestyles and economic organizations from Africa to the United States.  Jessica Gordon Nembhard, Eastern Conference of Democratic Workplaces board member and University of Maryland Economics and African American Studies professor, has prepared a slide show presentation on the role of African Americans in the formation of cooperatives in this country in the 1800s and throughout the 1900s. Our experience of cooperatives would be valuable educational and inspirational resource in reminding the community about how cooperatives were important survival tools in the past (as well as today in rural Southern communities).

We believe the Kwanzaa holiday would be a prime time opportunity to introduce worker and other types of cooperatives, and to push them as viable alternatives to the way capitalism has economically enslaved us, in the past and today.  By organizing an educational campaign around Ujamaa and the other principles during the Kwanzaa celebrations, this initiative would help to plant the seeds that may germinate into the viable and successful cooperatives of various types. 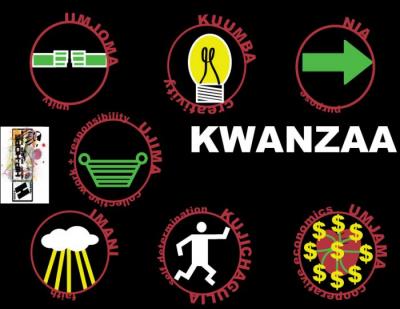 We have the chance to move from a celebratory approach to Kwanzaa as a holiday to one that integrates its essence, values or principles in organizing the economic development of the community. Ujamaa or cooperative economics is usually advanced by some celebrants of Kwanzaa as the way to African American economic empowerment. However, it is our contention that the ideas behind this principle are little understood by those promoting it. For many Kwanzaa practitioners, it is the mere buying of goods and services from African American-owned companies. This practice does not speak to the ownership and governance structures of the enterprises that are patronized. Wealth from economic production is a collective endeavor, as it is virtually impossible for the individual to create it single-handedly. Under the dominant economic system of the day, the people (the workers) who create wealth are generally not the ones who own and enjoy the use of it. Furthermore, the popular perception of the Ujamaa principle does not have a dialogue with the notion of “shared social wealth”, and the economic model that would best manifest this idea and practice.

We believe it is time for African Americans and all those who want a better economic life in this country to promote the knowledge of cooperatives as organizational models and tools for economic and social development. Cooperative education is a necessary, but not a sufficient condition for its adoption by the community. It must be put on display and experienced, as a practical way to meet the material and self-actualizing needs of the people. In order to disseminate the information about cooperatives, we should utilize the public forums that are used to celebrate the holiday as educational instruments. We may use each principle to highlight particular and relevant aspects of the structure and operation of cooperatives. In the community organizing phase of our educational effort we should experiment with different spaces (living room meetings, public meetings, street corner, places of worship, etc.) to reach the people.

Goal and Objectives of this Initiative

Goal 1: To facilitate the knowledge of cooperatives as an economic development tool, and the history of its use among African Americans.

Objective 1a: To get as least 20 Kwanzaa organizing committees to include cooperative education sessions in their celebration of Kwanzaa.

Objective 1b: To provide a list of cooperative development educators, resource people, and cooperative educational materials to Kwanzaa organizing committees.

Objective 1c: To provide an outline of the topics or subjects that may be addressed in educational or informational sessions about the principles, efficacy, structure, and operation of cooperatives.

Putting the Idea into Practice

At each Kwanzaa forum, for those organizations carrying out multiple-day activities, it would be advisable to include an introductory presentation on cooperatives. The suggested topics under each principle below cannot be fully explained in one day, but they give an indication of the possibilities. However, the following topics may be used in the cooperative education program for Kwanzaa 2004:

Umoja (Unity): Umoja is all about the community achieving strategic and operational unity in its quest for freedom, justice and empowerment. The following cooperative themes related to unity may be addressed on this day:

Kujichagulia (Self-determination): The first act of a free people is to shape the world in their own image and interest – Maulana Karenga, creator of Kwanzaa

Ujamaa (Cooperative Economics): The people ought to collectively own, govern, and control the economic institutions in the society or community.

Nia (Purpose): The creation of a just, free, and equitable society as the central goal of individual and collective vocation represents the highest ideal of human development

Faith (Imani): This principle is the foundation of any human endeavor. Without the belief in the ability of a particular course of action to produce its intended outcome, the necessary commitment to and faith in the project may not be forthcoming. Its absence is usually a surefire recipe for failure, underachievement, or inaction.

Resources for Cooperative Education and Development

Jones, B. (1990). Neighborhood Planning: A Guide for Citizens and Planners. Chicago: Planners Press.

The Spirit of Cooperation: The story of cooperatives and how Americans use them to improve their lives and communities – narrated by James Earl Jones