One Way to Skip Wall Street and Invest in Your Community

Take it from someone who gave away his inheritance 35 years ago: The act of distributing your wealth will propel you forward. 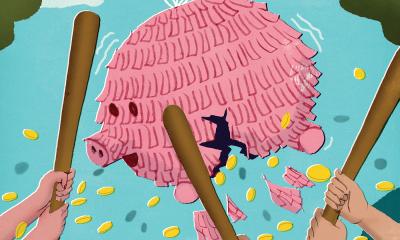 I recently met a person who, with considerable angst, asked what to do about a substantial inheritance.

My heartfelt response: Give it away. I did it myself more than 35 years ago, and it was the best decision I ever made. In 1986, faced with my own intergenerational wealth moment, I passed the gift along to several foundations working for “change, not charity.”

My other advice: Find others who are in the same situation and invite them to think things through together. When I did it, four friends and I made a pact to give away substantial assets. We collaborated on a book, We Gave Away a Fortune, to chronicle the inspiring stories of people who gave away their wealth and lived to survive and thrive.

And if you’re not ready to give away the wealth, set up your life so that you can give it away later on. Learn how to earn a livelihood that isn’t dependent on being wealthy. Build a community of resilience and support. Along the way, try to understand the economic story of the times we are living in and how intergenerational advantage works.

It’s true that a $30 trillion intergenerational transfer is in the works, as the baby boomer generation exits the stage, passing on their accumulated treasure to their children.

But in a time of gargantuan inequality, most of this wealth transfer will take place in the upper canopy of the wealth forest—what we could safely call “dynastic wealth” transmissions among those with $10 million or more, the richest 10th of the 1 percent.

Trillions also will change hands among the top 10 percent, not as huge trust funds, but in amounts that still will make a huge economic difference to their recipients.

Households in this tier—9.9 percent of the population, excluding the top 0.1 percent—have maintained a steady share of the wealth pie over several decades of accelerating inequality. As a class, they have witnessed (and in some cases facilitated) the siphoning of wealth from the bottom 90 percent to the powerful top 0.1 percent, while taking their cut.

In the absence of taxpayer-funded investments in public institutions to alleviate poverty and expand opportunity for the non-rich, wealth transfers reinforce a new physics of inequality: compounding advantage for the have-a-lots and accelerating disadvantage for everyone else. This explains the persistence of the racial wealth divide where median White households have 35 times more wealth than Black households and 25 times more wealth than Latino households.

If you find this troubling—or, more viscerally, repulsive, grotesque, or maddening—you have an opportunity to join with movements that are trying to put a brake on the dynastic concentration of wealth.

And if you happen to be in the class that won the birth lottery or are a future beneficiary of this intergenerational wealth transfer, and you want to live in an equitable economy, you are not alone. I’ve met thousands of people wrestling with having way more than they need and seeking alternatives. They deeply understand the dangers of our economic and ecological crisis, and the polarization of race, class, and culture. And they want to play a constructive role.

My invitation to them has been to “come home” and put down a stake, not in an enclave of the wealthy but in a community with race and economic class diversity. Instead of “opting out” of the community and privatizing their needs, opt in with gusto by relying on public transportation, education, recreation, and other community resources, and fighting for them alongside everyone else.

I also advise them to bring their wealth home—out from the shadows of the hidden wealth system, the trusts and offshore shell corporations. Shift wealth from the casino of Wall Street to the real economy of goods and services that people depend on. Use it to invigorate regional food systems and local production and services. Divest wealth from the fossil fuel economy (ideally in a public manner) and shift capital to the clean energy economy and vibrant new economy enterprises.

The reality is, wealth is usually only a small part of the package of other intergenerational advantages.

It also means recognizing the limits of the charitable industrial complex. Philanthropy is not a substitute for a progressive tax system and a vibrant and democratically accountable public sector at the local, state, and national levels. In the end, coming home means speaking up for a fair tax system and paying one’s own fair share.

The act of considering giving away your wealth will propel you forward. The reality is, wealth is usually only a small part of the package of other intergenerational advantages. I’m a personal sociological experiment: I’m White, male, and with four generations of intergenerational advantage. Even without the inheritance I gave away 35 years ago, I have plenty of other hard-wired advantages: my race and gender advantage, debt-free college education, social networks, a sense of agency, access to health care, and dozens of other benefits.

We must find others in the same boat. Renewal Networks’ “Play Big” conferences bring wealthy people together to share strategies that help align their money to their values. Another group, Resource Generation, is creating a support community for people under 35 seeking to take bold action to leverage their privilege for good.

Kate Poole, a Resource Generation member who co-founded Regenerative Finance, a network making zero-interest loans to locally controlled enterprises, told Money magazine that, for older generations, “building wealth was a loving thing to do for your family. I’m thinking more broadly about what is meant by ‘family.’ ”

For the sake of the extended planetary family, it’s time to break the intergenerational cycle of wealth advantage.

Chuck Collins wrote this article for The Good Money Issue, the Winter 2019 edition of YES! Magazine. Chuck is a director of the Program on Inequality at the Institute for Policy Studies. He is the author of Born on Third Base: A One Percenter Makes the Case for Tackling Inequality, Bringing Wealth Home, and Committing to the Common Good.