Learning from the Past

The Fall 2018 edition of Communities, focused on “Networking Communities,” is now available by donation for digital download. 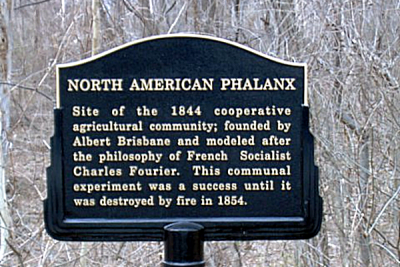 I am a graduate student researching the history of intentional communities, so when I think of “networking” with other communities I think of drawing lessons from the past to inform our present. For my Ph.D. dissertation at UC Santa Cruz, I am currently researching the Fourierist communities of 1840s United States. These communities are notorious for their short life spans, leading to their nickname among scholars as Four-year-ites. These communities fell apart for a variety of reasons, including financial hardship, intra-group quarreling, religious differences, and simply a loss of desire to continue on once the US economy recovered and other options for work and land acquisition re-emerged.

People often ask me if my academic research gives me lessons I can apply to my own community in the Central Coast of California. I usually go along with them, joking that my research never stops, as my personal and academic life are constantly overlapping, but in reality, I have found few lessons that cross over this vast period of time between the 1840s and today. The issues faced by the communitarians I study are difficult to relate to today—questions like: Should women be elected into leadership positions? (They couldn’t even vote in the US during the time of these communities.) How involved in the abolitionist cause should community members be? (Slavery would still continue to divide the country for another 20 years until the Civil War.) And which denomination of Christianity should be celebrated at the community? (Some Fourierist communities went so far as to offer Swedenborgian readings in lieu of church service!)

These issues just don’t exist at my California community, where members who attend any church at all are in the extreme minority, and where even referring to a meeting as “church” might actually mean you are attending the local ecstatic dance held down the road on Sunday mornings (frequently referenced as “dance church” by locals). There is no question as to whether women should receive an equal vote or be allowed to hold leadership roles at my community, and for most of the history of my community (albeit only five years) most members have been female. Slavery is long gone, though we are in agreement that racism continues on in the country, to our universal dismay.

Being a historian often leads me to look toward the past for lessons about the future. This is usually a comforting exercise for me; I can look to the brutal, contentious presidential elections of the early 19th century and think that maybe the latest political squabbles aren’t the worst the country has ever seen, for example. But looking toward history also requires responsible contextualizing of the social and political issues of the past, and avoiding irresponsible or oversimplified comparisons between events of the past and today. Thus, I recognize that the particular issues faced by communitarians of the 19th century differ in significant ways from the challenges faced by communitarians today, though some general themes can still be found from the past that might teach us lessons about our present and future.

1. Financial responsibility is still key to the health of a community.

A perennial reality of the Fourierist communities was their insufficient capital and financial indebtedness, which often led to a vicious cycle of internal tension, membership turnover, and desperate admittance of new members who won’t work well with the group. The Trumbull Phalanx community in Ohio in the 1840s, for example, tended to fudge their financial requirements for new members, allowing them to pay for their membership in alternative methods other than cash. This meant the community held an excessive number of cows, pigs, and wagons, but was forced to default on its property loans.

Communities can survive a few boring meetings about finances, but they can rarely survive bankruptcy.

Prioritizing the financial health of the community is probably the most boring topic to most community members, and in the history of our community, only two out of dozens of members have ever agreed to take charge of the finances. But while spreadsheets, budgets, and badgering members about overdue payments are among the least attractive elements of communal life, they are also some of the most essential. Communities can survive a few boring meetings about finances, but they can rarely survive bankruptcy.

2. Rules exist for a reason.

Long lists of rules and regulations are tiring and cumbersome to many communitarians, but leaving lingering issues unspoken and undecided is worse. The unclear position in which communitarians are left when issues go unresolved can leave them tiptoeing around that issue, feeling uncomfortable about overstepping an invisible line that was never explicitly drawn. This is why, in Fourierist communities, decisions often had to be made over whether the group would allow anyone to drink alcohol, eat meat, or hold church services on the property. Those communities who silently divided on these issues or left people to decide these contentious matters for themselves often ended up with internal divisions and bitterness.

And this is why, at our community, there are seemingly-bizarre rules about sleeping on the living room couch for more than two nights per month, or personal items becoming communal property after being left out in communal spaces for more than three days in a row. Of course, rules themselves should not be enforced to absurd degrees, but I have found that having stated guidelines at my community prevents everyday issues from being in a state of constant negotiation, which can cripple communities. These rules typically involve a past event that inspired their existence, but stating that past makes everyone clear about their future.

3. Flexibility in membership is essential.

Communitarians living at a community for over five years have likely made concessions and compromises they never thought they would have to make. Circumstances in communities can change rapidly, making some potential members suddenly seem much more appealing than they did before, and others seem suddenly poisonous based on experiences with them. At the Northampton Association of Education and Industry in Massachusetts, labor activist Sarah Bagley applied to live at the community in 1844, but her lack of abolitionist credentials and personal contacts in the community led to her application being rejected. One year later, under desperate financial circumstances, the community reached out to Bagley, asking if she might still be interested in moving to the community and even leasing the community’s factory. Suddenly, Bagley’s skills in textile mills and factory work made her a very attractive member to the financially-struggling community.

In my own community, our negative experiences with members in their young 20s had led us to view them all as transient, lazy, leeches. Then, when a wave of openings appeared all at once in the community and a wave of 20-somethings were the first the apply, we thought we would give them another chance. Their energy totally transformed the community, giving it new life and creativity. They revitalized the community garden, brought in bee hives, and initiated community social gatherings. While there are some individuals who might never thrive in the communal setting, I have found that it’s best to avoid imagining an ideal “type” of person I would like to live at my community, while rejecting all those who fall outside of those preconceived criteria. “Older” members need to be flexible to change with the needs of the community, or their inflexibility might inadvertently undermine the future of the community.

While these lessons from the past might seem vague or predictable, I am constantly reminding myself of them when another meeting on finances seems too boring to handle, or another explicit rule too cumbersome. While I wish we could “network” with the past in more direct ways, such as asking these historical community members to keep diaries on their experiences in community and the advice they would like to leave for future generations, this is unfortunately not possible. Thus, all we can do is look to past communities, and the community members who populated them, and try to understand what they found most fulfilling and most impossible to accept about communal living across time. The specific political or social issues faced by any one community might change across time periods, but those aspects of communal living that are most likely to undermine communal structures are timeless.