Worker cooperatives can help build community wealth through sharing profits with workers.   The Third Cooperative Principle is “Member Economic Participation” which describes how members invest into the cooperative and benefit from the surplus of the cooperative, as well as share any financial burdens it may have in difficult times. Similarly, the Second Cooperative Principle is Member Democratic Control, which is a key to this equitable sharing process as members decide how the surplus is distributed.

Your legal structure will determine different aspects of how the cooperative can distribute profit or surplus. For the sake of this blog post, I’m referring to Worker Cooperatives that are incorporated under corporate statutes. As incorporation statutes do change in different states, any of this information you would want to review with an accountant and/or lawyer in your state (and preferably one that knows co-ops – CDI can help you find one, get in touch.). 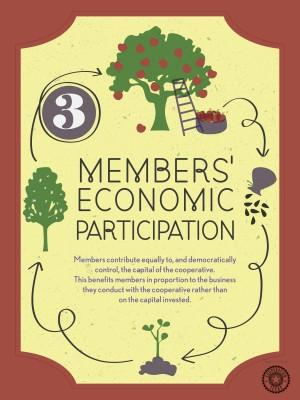 The ratio for the distribution of surplus is determined by the cooperative. Who determines this should be clearly defined in the bylaws. Some cooperatives leave it up to their board to decide each year how this is distributed, other cooperatives have defined ratios in their bylaws, while still others may decide on the ratio each year at their annual meeting of the worker-owners. Here’s where the principle of member democratic control is important, worker-owners need to have a democratic voice in how the surplus is distributed. Again this democratic process would be defined by the bylaws and could be made by consensus or majority vote, depending on the process of the cooperative.

The remaining amount can be either distributed as cash or put into the worker-owners’ individual capital accounts. The capital accounts stay within the cooperative and can be drawn off, cashed out in a certain number of pre-determined years, or when a member leaves a cooperative.

While this is a common formula and dividends should be based on patronage, some co-ops may adjust this to include additional benefits for years worked at the co-op or retroactive compensation for hours worked by founders. It is important that this formula be approved by a democratic and transparent process.

Some worker cooperatives issue Class B or Preferred Shares. The bylaws would define when these shares could be issued, who can buy them, and how any dividend would be set.  As a non-voting, passive equity investment option, Class B Shares offer an innovative way for co-ops to raise capital without ceding too much control.  As the name implies, any dividends earned on Preferred Shares are paid before any distribution would be made to worker-owners.

Sharing profits is a great benefit of worker cooperatives, and when it is based on democratic principles it can lead to businesses that are more stable and equitable while also giving workers greater benefit from their labor.

Jonah Fertig-Burd is a Cooperative Development Specialist with the Cooperative Development Institute in the Cooperative Food Systems programs.  He works with farmers, food producers, cooks, distributors, and community members to develop democratic businesses. He is a co-founder and board member of the Maine Farm and Sea Cooperative and has served as a development coordinator for the nation’s first farm & sea-to-institution cooperative.  He also works with New American farmers, assisting them in developing cooperatives and helped Somali Bantu Farmers in Lewiston form New Roots Cooperative, the first New American owned cooperative and farm in Maine.  Previously, he co-founded Local Sprouts Cooperative in Portland, Maine and helped develop it into a successful worker-owned cafe.

Creating the Internet of Ownership

We Can Have the Economy We Want