Perched on one of the foothills of the Pyrenees, in the Basque region, Lakabe was a tiny deserted village of 7 houses reinhabited 34 years ago by a handful idealists fleeing the city life. There were no roads and no roofs on the houses. There was very little money for redevelopment and certainly no tenure. Now there are 50 people, a bakery, a sustainable pine forest, and the village is 'official' although the property can neither be bought by the residents nor sold by the local government. The endeavour was and continues to develop very slowly, but without debt. In fact, building isn't so expensive when you have the skills on-site, the stone, the wood, and the lime.

60% of the village's monetary income comes from the bakery. Throughout the summer, the bread is driven all across Spain to be sold at festivals and shows. This isn't extremely profitable, but it is enjoyable! In addition, there is soap, beer, juice, timber, and solar electricity produced but not much above subsistence levels; the village runs various courses for paying guests, distributes and installs solar panels (not for profit), and other professional skills are sold into the Spanish economy.

Exchange with the outside world is practised extensively. There are several proto-ecovillages in the region, and Lakabe provides bread to them all in exchange for vegetables not produced in Lakabe and building skills. Students on the courses, for whom money is tight, are presented with a list of the village's material needs. Bulk buying is also utilised. The bakery takes one delivery of organic grain per year, and every month they drive to Valencia to pick up a tonne of oranges for consumption, juice, and redistribution.

All food and resources are held in common; people enter each other's houses without knocking, but, beyond that, there is no attempt at equality within the village, either in contributions or expenditures. All income from both outside work and sales goes straight into one pot from which all monetary needs are met. Withdrawals up to 500 Euros need no authorisation and, importantly, no name. Villagers found it impossible to estimate their average working hours. It is truly "From each according to his ability, to each according to his needs." 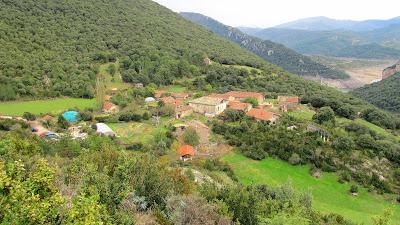 Villagers do not feel that money is insufficient, nor do they have any new enterprises planned, nor do they take WOOFers. There are indicators of abundance, also: the children receive lots of attention, there is no coercion of any kind, and the bakery stands idle for five days out of seven! But the converse is also true. The furniture, clothing and hairstyles are by no means clear indicators of poverty, but there is no lump of accruing capital to comfort the aging pioneers in their less productive years; most of them have gone or are seeking alternatives. Indeed, the 'pot' sometimes runs empty.

Some people think that 35 adults is too many for this extreme familial form of communal living. Over the years they have tailored various methodologies such as 'horizontal governance' and 'sociocracy', to their needs, and now they have their own way of maintaining understanding and motivation. But there is no way to resolve some matters, such as people choosing work which is not valued by others, because no-one wants to compel anyone.

Towards the end of my stay, I started to understand how this community is valuing self-sufficiency above efficiency, abundance, and personal freedom. However, self-sufficiency involves hard work and only a few people are working hard, which means that the standard of living, although leisurely, is low. The idealism that sustains Lakabe gives rise to an ambivalent attitude towards technology; the tractor in the car park is used only for cutting wood while the small plots of land are ploughed by horses. There is a reluctance to develop the economy if it involves investment in technology and machinery.

In many ways this village is a great example of long-term cooperation and commitment to living together. But an ecovillage with nothing to offer the elderly is not as self-sufficient as its ideals would require.