Textile Co-Op Gives Immigrant Workers a Stake in the Business 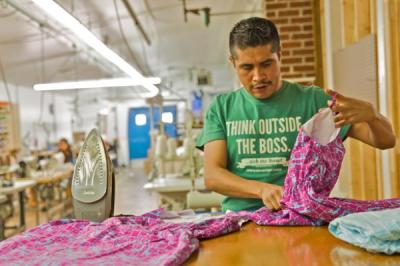 When Walter Vicente came home from school as a kid in Guatemala, he helped cut and sew button-down shirts for his older brother’s small textile business. All the brothers in the family were involved in different parts of the operation, from selling the shirts on the street to working the machines.

Full members earn a share in the company’s profits.

Twenty-five years later, Vicente still works at a textile business, this time in North Carolina. It’s not a family business, but it’s what some would call the next best thing: a worker-owned cooperative. And it’s showing that immigrants can play a leading role in bringing back the United State’s declining apparel sector, not just as labor but as owners and decision-makers.

At the same time that Vicente was learning the textile business in his home country, Molly Hemstreet was seeing the industry close up shop in her hometown of Morganton, North Carolina. Factory by factory, what had been the largest employer in town was picking up and moving out. Between 1992 and 2012, the number of workers employed in making clothing and other fabric products in North Carolina fell by about 88 percent, from about 95,000 to only 11,400.

“I grew up in this generation when all these companies left,” Hemstreet said. “People worked on Friday and didn’t have work on Monday.”

Hemstreet wanted to find a way to create a new kind of clothing factory—one that wouldn’t so easily be led away by the lure of cheaper wages.

In 2008, she founded Opportunity Threads, a worker-owned cut-and-sew plant built on a threefold ethical platform: social, environmental, and economic benefits for the local community.

The company today employs Vicente and 22 other workers, most of whom are of Mayan descent.

Up the supply chain and through its clients, Hemstreet hopes the company will continue to reflect the diversity of Morganton, whose population includes Mayan and Hmong people—many of them refugees who escaped armed conflicts in Guatemala and Laos—as well as African American and intergenerational Appalachian communities.

While Opportunity Threads doesn’t source its own materials, its staff works with partners who specialize in organic, upcycled, and local fibers. This has helped them attract eco-conscious clients like Maggie’s Organics, Project Repat, and the toy company Eco-Bonk.

Opportunity Threads is also a worker-owned cooperative. In addition to receiving paid holidays, vacation, and sick and maternity leave, full members earn a share in the company’s profits. It’s the key that drives the engine, Hemstreet said. Opening the door for workers to become worker-owners allows them to contribute to the business’ growth and strategy.

Ed Whitfield, a North Carolina resident for more than 40 years and comanaging director of the Fund 4 Democratic Communities, sees Opportunity Threads as proof that working-class people are capable of organizing themselves into democratic workplaces.

“It proves that immigrant communities can do more than make money for someone else,” Whitfield said. “By the example that Opportunity Threads sets, other working people learn new possibilities about how they might end their exploitation and rebuild their lives.”

Vicente says his experience as a worker-owner contrasts sharply with his first three years in Morganton. Up until landing a position at Opportunity Threads, he worked from 6 a.m. to 4 p.m. at Case Farms, a chicken processing plant in the area, as well as the 6 p.m. to midnight shift at Burger King. His at-home life was pressed into just two hours a day so that he could make ends meet.

Now, he spends part of his workweek in team meetings, regularly contributes to business management, and still has time to spend with his son and three daughters. It’s given him a place in the company’s future.

“I have dreams, and the hope is that we can grow the plant from 23 employees to 60 or more,” Vicente said.

Twenty jobs won’t change the larger trend in textile and apparel employment in North Carolina, and Hemstreet knows that. But she says that wasn’t quite her goal. Instead, she saw a need, a set of skills among Morganton residents that wasn’t getting used and a chance to place the workers at the forefront.

This article was originally published under a CC BY-NC-ND license 4.0