The Cooperative Movement in the South

In 1998 Clyde Woods wrote, in his path breaking book Development Arrested, that 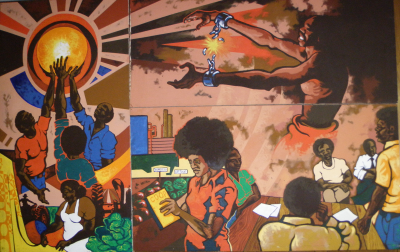 As argued throughout this work, a new development path does not have to be invented. For over a century and a half, working-class African American communities and their allies have continuously experimented with creating sustainable, equitable, and just social economic, political and cultural structures. … In the 1960s, African American organizations that emerged from the civil rights movement had returned to the historic tasks both of building rural communities based on cooperative principles and of dismantling the plantation complex. …

If we are to build a society where working-class knowledge and participatory democracy are truly treasured, we must understand that the South is the center of African American culture, not its periphery. … Future political and economic movements must view African American folk culture as a central, and necessary, element in the construction of new institutions and new regional realities.

This theme of Grassroots Economic Organizing Newsletter celebrates the positive legacies and accomplishments of cooperative development in the past and lights the path to further growing the southern cooperative movement.

Some of us will be in Jackson Mississippi the first week-end of May 2014 to celebrate Jackson Rising: a conference which will “serve as testimony to the vision and legacy of the late Mayor” Chokwe Lumumba, and will also serve as “a vehicle to help foster the development of cooperatives and other types of worker owned enterprises in Jackson.” See the first article in this theme:  Jackson on the Rise! The Movement to Build Economic Democracy in Mississippi.  We want to use this occasion to explore and highlight the cooperative movement in the South and Cooperatives in the South.

Dara Cooper’s interview witih Kali Akuno, Jackson, Mississippi is Rising: An Interview with Organizer Kali Akuno on Sustainability, Race, Class and Solidarity Economics, provides more details about efforts in Jackson to develop a cooperative commonwealth, that continue the 150 year legacy Woods mentions. Akuno explains that “If successful, Cooperation Jackson will represent a breakthrough for the Cooperative Movement in the South, as the first major network of predominately worker cooperatives to be established in an urban area in the region.”

Ed Whitfield, of Fund for Democratic Communities and The Southern Grassroots Economies Project, writes that what is needed to end the southern legacies of exploitation, enslavement, and wealth extraction is democratic ownership and democratic governance. Struggling to End Southern Bondage, reminds us of both the harsh past and the possibilities of economic democracy and cooperative solutions in the new south.

The Southern Grassroots Economies Project (SGEP) has compiled a handout with the international values and principles of cooperation, with comments and elaborations. This is an enhanced version of the International Cooperative Alliance principles, added to in order to eliminate the need for differing principles by some of the groups within SGEP. It consists of the original ICA principles with a few notes added to each description to make clear and expand some of the concepts included. The added remarks are delineated with brackets so that anyone reading this can see the principles as officially distributed.

Dara Cooper discusses with Monica White the historical contributions of Black farmers to land ownership, food security and social change, in Black Farming, Self Determination and Resilience: An Interview with activist and researcher Monica White, PhD.  White explores connections between southern Black agricultural cooperative traditions, the role of the Federation of Southern Cooperatives, and urban farming through the Detroit Black Community Food Security Network (DBCFSN). She argues that “Growing food as a part of community resilience, organizing cooperatives as resistance are just a few of the many ways that people are working together to change lives.”

Another article in this issue focuses on one of the historic cooperatives in South Carolina. In 1948, on Johns Island, one of the Sea Islands in South Carolina, the Progressive Club owned a cooperative store and a credit union (the credit union is still in operation today).  In The Co-op that Changed the South, David Thompson traces the history of the Progressive Club’s cooperative activities and the Citizenship School the club established to teach literacy so members of the community could register to vote. By 1963, with 400 members in the co-op, the club received help from the Highlander Center in Tennessee to buy land, and build a larger store with meeting rooms that could also accommodate the Citizenship School.

Mississippi and other states are working to expand their laws on cooperatives. Jessica Gordon Nembhard wrote a white paper on the benefits and impacts of cooperatives to help legislators and others understand the importance of cooperatives to the economy and especially to community economic development and community wellbeing. Here we reprint excerpts from this study, and highlight information about the impact of cooperatives in four southern states: Mississippi, Alabama, Louisiana and Florida.
The South is on the rise! GEO will continue to follow this movement and to share information, with new articles relevant to this topic posted periodically. Happy reading!

P { margin-bottom: 0.08in; direction: ltr; color: rgb(0, 0, 0); widows: 2; orphans: 2; }
Jessica Gordon Nembhard is a political economist and Associate Professor of Community Justice and Social Economic Development in the Africana Studies Department at John Jay College, City University of NY; and author of Collective Courage: A History of African American Cooperative Economic Thought and Practice. An affiliate scholar with the Centre for the Study of Co-operatives, University of Saskatchewan, Canada, she is a member of the GEO Collective, as well as the US Federation of Worker Cooperatives, the Eastern Conference for Workplace Democracy, the Southern Grassroots Economies Project, and the US Solidarity Economy Network. Gordon Nembhard is also a member of the Shared Leadership Team of Organizing Neighborhood Equity (ONE) DC (a community organizing organization in Washington, DC). Jessica is the proud mother of Susan and Stephen, and the grandmother of Stephon Nembhard.

Cooperative/Solidarity Economics and Advancing the Development of Worker Co-ops