Identifying and Overcoming Ideological and Economic Barriers to Solidarity Economics 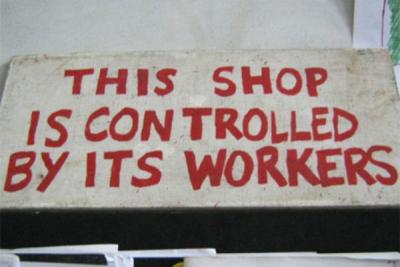 [Editor's note: GEO first published these two essays on the hurdles faced by coopeative and solidarity economy enterprises in 2001.  While the cooperative movement has made great strides in the intervening 14 years, the roadblocks identified here by the authors are still concerns for both new and existing co-ops.  In light of the recent surge in support that cooperatives of all kinds have been experiencing, thinking strategically about how to overcome these barriers may be more important now than ever before.

While much attention has been paid recently to overcoming the financial barriers faced by cooperative ventures (crowdfunding, DPOs, etc.), the authors here identify other contraints—political and social in nature—that have received much less consideration from cooperative practicioners, developers and activists.]

James DeFillipis is a lecturer in the Department of Geography, King’s College London, United Kingdom

Alternative, democratic, forms of community economic development operate under both adverse financial and political conditions. These two sorts of constraints are distinct, though they often come together in practice, particularly where funding is restricted. Forced to struggle for survival without compromising their democratic ideals, these alternatives find ideological strings attached when they seek either government or foundation funding. A key strategy of community development organizations, therefore, is to generate their own alternative, internal, sources of funds from profit-making community owned or community based enterprises. I will discuss that approach and the two sorts of difficulties and constraints that it must confront. The problems I will raise for alternative and democratic economic initiatives are ones, I must confess, for which I do not have definitive answers. Hopefully, the process of raising them here will be enough to spark further inquiry.

This strategy has been used very widely within the USA, and has had some very visible success stories. Most community development practitioners know the story of Zion Baptist Church in North Philadelphia using congregation-raised funds to develop a shopping center in the area. Another group which has used this strategy quite effectively has been HousingWorks in Manhattan, a gay organization that provides housing and employment for people who are HIV-positive or have AIDS. They own and operate a couple of thrift shops in Chelsea and the West Village, which they use to generate funds and largely liberate themselves from outside funding constraints, so they can continue their political organizing efforts. But community-owned enterprises extend beyond the realms of retail, commercial, and industrial activities, and are just as widespread in finance (in the form of community development credit unions) and housing (in limited-equity housing cooperatives, Mutual Housing Associations, and community land trusts).

A community generally has several groups of stakeholders who have disparate as well as overlapping interests...

But there are often financial problems here. In very low-income areas, for example, community-owned retail tends to be a poor revenue generator. It is usually devoted to the provision of needed community amenities (like a supermarket), not to profit making. These areas simply do not have consumers with enough income to generate wealth from the retail sector. The record of collective affordable housing ownership is better (in that the housing is protected from either further disinvestment, or reinvestment in the form of gentrification and displacement). But affordable housing is almost impossible to provide without some continuing subsidies. That is why the market does not provide it; it is just not profitable to do so.

Moving now from financial to political constraints, one problem is that a community generally has several groups of stakeholders who have disparate as well as overlapping interests. These include, for example, the workers in an enterprise, consumers of their products, and residents affected by traffic, noise, waste disposal, and other effects of the enterprise. Different religious, ethnic, and racial groups; homeowners and renters; and different income groups may also have conflicting concerns. When we say, “democratic,” or “community based,” we need to be very clear that there are significant questions about which stakeholders are engaged in the decision-making process, and how much weight is given to the various, and often competing constituencies.(1)

A second political issue is one of means becoming confused with ends. That is, we do not want a “movement” of shopkeepers, industrialists, and landlords. Historically, this is largely how the Owen-inspired cooperativists lost their political radicalism in 19th century Britain, and how radical “black power” became “black capitalism,” and then became “community development” in the 1970s United States. Too often the demands of ownership become all-consuming, and the radical critique which inspired the ownership is either de-prioritized, or worse.

This brings me to the last, and probably most substantial, political constraint within this model of democratic, community-based, ownership. That is, can the market be the realm through which democratic, community-based ownership is promoted? The relationship between markets and democratic practice is a strained one (both at the level of individual firms, and at the level of whole societies), and I am yet to be convinced that they are completely reconcilable. Or, put another way, and to paraphrase Audre Lorde, can the master’s tools ever dismantle the master’s house?

(1) Editor’s note: These issues are addressed by the field of mediation and conflict-resolution, devoted to win-win solutions rather than mere compromise (Fisher, R. and Ury, W. L. 1981). Applied proactively, conflict-resolution can develop into community collaboration based on creative problem-solving.

The major constraints on cooperatives, like those on SMEs, are economic. The key issue is developing the appropriate scale economies, involving innovations to reduce economic marginality, and building inclusive structures. The intersection between ethnic groups, high technology (or innovation-based) jobs, and cooperative forms becomes increasingly important. For example, after the recent “riot” in Cincinnati this April, a business executive called for creating a technical center in a local high school (an obvious reference to the digital divide), but without a context for making it viable. The linkage of engineering skills, supporting finance, advanced manufacturing and cooperative forms can provide a foundation for combining growth, economic integration, social inclusion, and democracy. More attention must be paid to making these connections.

Despite the potential benefits of this combination, it has been difficult to come by. Many grassroots organizations and community groups have promoted service-based or relatively low-skilled business as the path of least resistance. These sectors often are lower paid and afford few opportunities for job ladders unless they are linked to the appropriate training and mechanization. Mechanization potentially offers the ability to raise productivity and create a surplus. This surplus can then be invested in training and improved assessments of service delivery. The cooperative linkage of consumers’—and workers’— interests could conceivably create a better foundation for both service delivery and improved worker conditions (see Victor Pestoff above). At the same time, the introduction of new technologies is facilitated by cooperative forms, especially those that guarantee job security and worker inputs into decision-making and quality control improvements (as suggested by Seymour Melman among others).

As David Ellerman points out [...], there have been ideological barriers to making these connections. Yet, more than this, planning and business school programs have given very little attention to scholarship regarding cooperative economics or industrial engineering. Instead, the state has been a central object of attention for planners, whereas business schools have often myopically focused on market or financial economics, with little attention to engineering issues or democratic organization. Intellectual Taylorism (or a rigid curricular specialization) has helped promote powerlessness and economic scarcity by preventing social mobilization around an alternative organization of society and its core economic institutions.

A further and even more central problem with traditional and even some radical community development approaches is that they fail to address the issue of an inequitable distribution of power. Thus, strategies of participation and even income redistribution are insufficient if they do not give marginalized communities access to wealth generators. Cooperatives are important because they can help increase the wealth of poor communities and communities of color. A lack of economic power and wealth, by constraining the economic resources that promote political power, can limit who can participate or have influence in a democracy.

In sum, what is lacking is a comprehensive theory about how to systematically accumulate power, rather than a theory about powerlessness. There is a need for a new paradigm that would revolutionize community development practice to exploit innovative rents in cooperative settings. These “rents” (or revenue streams) are based on new products with advanced technological or scientific inputs and organizational innovations. If co-ops and democratic economic networks hope to benefit from such inputs, this requires a new and closer relationship among grassroots social movements (e.g., the student movement), cooperatives (or other democratic economic networks), and the universities. Universities are key platforms for growth in emerging sectors, yet they also overlap with a local activist population.

In our research on this topic, Feldman has written about the need to develop international franchise cooperatives and the potential role of universities as economic and social change agents. Nembhard has written about how democratic and cooperative economic development, especially in African American communities, provide important strategies for wealth creation and urban revitalization. She (with Curtis Haynes, Jr.) has also explored ways in which the Mondragon model has relevance for development within African American and other subaltern communities.