Self-Organization and Self-Sufficiency in Rojava

cross-posted from Co-operative Economy in Rojava and Bakur 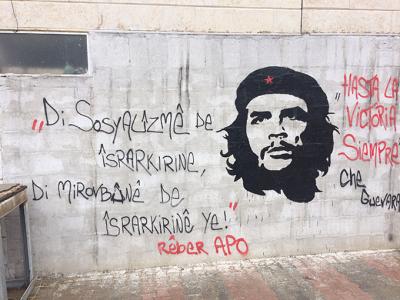 The Revolution in Rojava has its own special dynamic that is difficult to express with words. In a positive sense, it is surprising. At first sight, the Kurdish Freedom Movement can seem to be too much oriented towards a practical approach and with not enough focus on theory, yet, they actually do have a very well-defined vision of a possible future.

On the 19th of July 2012, the People’s Councils of Rojava formed to bring the model of “radical democracy” to life. The first councils were based in different quarters of town. Yet, after a few months, it was noted that these councils were not close enough to the population to guarantee real self-organised autonomy. A discussion ensued, as a result of which it was decided that “communes” (“komîn” in Kurdish) would be built up on a lower level─that is, neighbourhoods and streets─to integrate people better into the basis of the self-organisation; a more direct form of “radical democracy”. Today, there are more than 4,000 communes in the whole of Rojava. Many of them even exist in the areas outside of Rojava that were freed by the YPG and YPJ forces, like Manbij [Mabuk‎ / Minbic] or Shedade. Neither the launch of the democratic-autonomous self-administration from January 2014 onward, nor the proclamation of the Democratic Federation of North Syria in March 2016, automatically led to a real, lived, radical democracy. Instead, they steadily furthered the continuous expansion of the council system.

The revolutionaries in Rojava are working tirelessly to build up communes everywhere. They also go to less politicised people, or people that are politically far from them. Communes are structures at the grassroots of society; the commune is where self-organisation as propagated by the revolution mainly happens. People in a village or in urban areas, or households of one to three streets, come together, discuss, organise and build commissions to work on different topics. They also coordinate these commissions. The coordinators meet up each week. They are frequently in the streets, or visiting households─of course including those households where no one participates. All households are called upon to come to the assemblies if something important needs to be discussed. That happens frequently, about once a month. In the assemblies, they also inform people about the discussions and decisions taken in the assemblies at the higher level. In the city, this is done by the aforementioned neighbourhood council, and in the countryside by the People’s Council, which brings together 7 to 10 villages.

“I go to almost all demonstrations that take place in the city. I go with Kongreya Star, the women’s movement I belong to,” says Yade, a woman of around 55 years old, who is sitting on the ground facing me. Between us is the oven, around which everyone gathers. These days it is very cold in Rojava; a sharp wind blows. “The oil that fuels the oven is brought to us by the commune, which has created an economic committee specifically for this. It is much cheaper this way and a certain quality can be more or less guaranteed. Otherwise, we’d have to get it on the market, and there are all sorts of crooked merchants out there.” It took two hours before she told me this information. The people of Rojava are friendly towards outsiders, but they remain reserved.

The Commune buys essential food products (sugar, salt, bulgur, oil, bread, etc.) and other important goods directly from producers and wholesalers for around 20 to 35% cheaper. If there are cooperatives that produce or trade in these goods, the cooperatives are favoured. A relatively large amount of goods was bought from the cooperative “Hevgirtin”, which exists throughout Rojava and trades in products of agricultural cooperatives and other local produce. Since not everything that is used in Rojava is produced locally, imported goods must be purchased from merchants, too.

This practice of building up and supporting a cooperative economy strengthens the communes in their structures, because they take care of a broad array of material needs. But they also do something even more important: people who have been torn out of their usual social surroundings and are dependent on the state in all areas of life come together at the grassroots and act together in solidarity. They learn to discuss issues together, and not in an individualistic manner.

“These projects remind us of our childhoods. Some of us have already lived in a similar way as children and now we are finding our way back to our essential selves,” interjects the father of Abdulselam, the teacher. Abdulselam had invited us for dinner  in his home and the father, who may be about 60 years of age, came to visit his son rather spontaneously. He continuess talking excitedly: “The older generation recognises what the commune does, and that is a good thing. We understand that this makes sense and we also see how much we have lost during the past 40 years”.

The commune procures generators to create electricity for the households. This happens mostly just between 4 pm and 10 pm, because they only manage to produce three hours of electricity. Instead of people acting individually and one to three households making electricity for themselves, thereby constantly raising the noise level in the streets (while the poorest cannot afford any of it), the commune does this for everyone as a group. The diesel for the generators is bought relatively cheaply from the public facilities that do the refining.

Even if the commune hasn’t formed a cooperative, it still acts like a cooperative in issues like purchasing and meeting the needs of the people. Communes look at how people’s needs can be covered in the cheapest and most effective way, while at the same time supporting the poorest among them. They support the poor on the short term by providing for their basic needs, and on the long term by getting them involved in production processes, especially in cooperatives.

The health movement of Rojava has made it one of its goals to train two people in each commune in basic health care. They will be able to treat the lighter cases of diseases and injuries. There are also neighbourhood dispensaries.

“Knowledge in the health sector must not be limited to individuals. This kind of knowledge must become part of society; it strengthens democracy and the self-sufficiency of the people,” activists tell us with pride. In the three communes we visited, there were people who are currently receiving training. From now on, they will have people in their direct surroundings who can treat medical problems. People don’t have to go to the doctor for everything; those who were trained can treat them and get medication from the dispensaries.

Tens of thousands of people in the communes are getting basic military training at the moment because of dangers from terrorists and other structures. This mostly means attacks by IS, Al-Nusra and the Turkish and Syrian regimes. Sleeper cells in the cities of Rojava could attack at any moment. In the case of an open war, there could be attacks from enemy units against the civil population. The population has to learn to defend itself without waiting for the YPG/YPJ (the People’s Defence Forces and Women’s Defence Forces, respectively). These new structures are called Civil Defence Forces (HPC).

The peace committees are formed at the neighbourhood level in the communes. These committees carry out conflict resolution at the grassroots level. The need for communes to build such committees has been stressed over the past two years. If not one committee for every commune, then at least one for two or three neighbouring communes.

Communes are also increasingly active in other areas, too. For example, the coordination of the communes offers better cultural programmes for parents now, so their children can regularly visit the cultural centres in their town. There are courses in music, singing, dance, theatre, etc. This work is important because the Kurds and other cultural groups have been culturally assimilated over many decades and there is a great need to freely celebrate their culture and to develop it further.

In short: much has been done in Rojava over the past two years. The communes are increasingly becoming the centre of political, economic and social life. They are being strengthened in cooperation with different institutions and movements in Rojava, above all by approaching the wider population through the communal structure.

A lot remains to be done, the revolutionaries are still at the beginning of their work. They are discussing and trying out many things. The contradictions between people, communities and social groups continue to exist; some have been weakened and new ones have appeared.

Enzan Munzur is an Internationalist from Europe. He has known the Kurdish Freedom Movement for many years and has worked on different projects together with it. At the moment he is staying in Rojava.