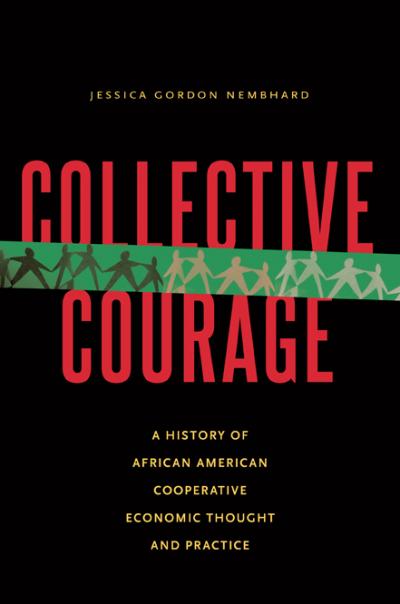 [Editors note: Collective Courage can be purchased online from PSU Press here.  Use the code JGN14 at checkout to recieve a 20% discount. Please encourage your local libraries and co-ops to purchase a copy of this important resource. This is history that deserves to be shared.]

On the back cover of this new book by Jessica Gordon Nembhard, you will find such high praise as “path-breaking”, “offers profoundly important guidance”, and “the originality of this is substantial”.

Normally, language of this kind inclines me towards skepticism, but in this case, I agree with it 100%, and then some. For Collective Courage is truly a book to be celebrated and not merely reviewed. A book to read and re-read, one that gives voice to a long neglected and embattled history, and which can contribute massively to new and far more democratized and humane forms of social and economic life than those to which we are accustomed or resigned.

Now that you are skeptical, which is fine, let me spell out why I feel a celebration is warranted.

First, as other reviewers have noted, there is “no similar work”. That is, no piece of writing that scrupulously and comprehensively examines the more than 150-year relationship between African Americans and cooperatively owned and democratically managed economic enterprises. Again and again, on almost every page, we are provided with detailed cases of worker, consumer, producer, and housing co-ops, of intentional communities, and a wide range of what are now called support organizations (credit unions, community funds, etc.) that helped build initial capacity and provided needed resources for sustainability. Very, very few of these were familiar to me, though I have been writing and teaching about, as well as advocating for, cooperative and workplace democracy for over 40 years.

One of my favorite examples in Collective Courage is the Cooperative Workers of America, a 19th century initiative in South Carolina which started “cooperative stores and a free cooperative school system, and addressed issues of wages, working conditions, and electoral reform”. As was typical within African American cooperative initiatives, “women were admitted with equal status as men”. A host of others are showcased in chapter 4, which reveals how “study circles” and multiple forms of peer-based education were – and are still being – used by African Americans to gather the emotional energy and intellectual acumen needed to start and sustain cooperative enterprises.

All of these cases are usefully chronicled within nine different periods of time beginning before the Civil War and ending with contemporary initiatives. A final chapter identifies the patterns within this courageous and diversified history, and draws out the lessons it holds for those seeking ways towards an economy and democracy that works well for all. Of these, I found the section on Youth Development and Education especially insightful. The author has “written about using collective entrepreneurship and cooperative development to motivate high school students to continue in school and become activists”, and she points us towards working examples of “high school curricula that include teaching students how to run their own businesses, how to operate cooperative businesses, and how to be more involved in community development…”. If you are an educator or co-op practitioner, please make reading this chapter a priority. And if you aren’t either of these, become one and persuade others you know, especially teachers and co-operators, to share this priority.

Secondly, as its subtitle implies, the book continuously blends “theory” with “practice”, drawing on both precise, painstaking, and externally designed research and the hands-on wisdom of engaged practitioners. (The author herself is an experienced and accomplished veteran of both paths.) This not only makes for more interesting reading, but contributes to the very wide accessibility of the book; Collective Courage is not just a book for historians or cooperative researchers, but for all of us. A good example is the whole chapter 9, The Legacy Lives On – devoted to the long-lasting Federation of Southern Cooperatives (FSC). In it the author assesses the FSC’s accomplishments over 45 years, combining her own quantitative research with the reflections of many of the FSC’s own leading co-operative practitioners, e.g., to “articulate and measure the federation’s…impact on their local communities.”

Finally, as befits a great book, Collective Courage raises some hard and controversial questions. One of these begins to surface early in the book, when the author states that her focus became

Quoting other researchers, she relates that:

And in the final, lesson-drawing chapter, we are told that

“One development strategy for marginal, disadvantaged, underserved, and oppressed groups is to use economic cooperation and group solidarity to create businesses that will provide meaningful work and income, greater control for workers, and the possibility of wealth creation.”

These statements do not directly assert, or even imply, that cooperative economic development can only be successful within and for subaltern populations; i.e., that cooperative enterprises may lack benefits or attraction for groups who are not faced with oppression, marginalization, et cetera. But they may seem to suggest this, and it would be good to know the author’s position, one way or the other, on whether or to what extent a cooperative economic strategy can also work well for those not under-served.

But beyond this, statements about co-ops “finding niches” and diminishing “market deficiencies” do seem – at least to me – to strongly suggest that cooperatives can unintentionally provide a way for multi-national corporations and other established forms of domination to weaken or deflect more radical strategies or revolutionary opposition. That is, if co-ops can fix “market failures” by offering stable work and income, more affordable housing, et cetera, those receiving such benefits may become content with their new situation and lose enthusiasm for more widespread and systemic change.

In either case, tough questions can arise about the author’s claim in the book’s final chapter that “cooperative economics can be a tool or strategy of a larger movement….” – a claim I certainly want to feel justified in believing. 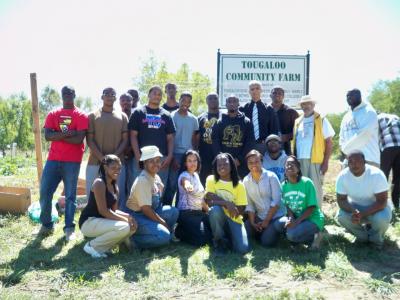 A second difficult, and most probably connected, question Collective Courage provoked concerns the relationship of African-American and other “sub-altern” cooperatives to the wider cooperative and solidarity economy movement(s). The book draws richly and heavily on the work of W. E. B. Du Bois, who advocated “economic segregation as the path to successful ‘group economy’ in the Black community [italics added].” For African-Americans, this was, and might still be, a frequent recipe for success, but it also could isolate marginalized groups from potential allies, e.g., in co-ops, or cooperative associations, outside their own communities. How to embrace both sub-group autonomy or independence while building a “larger movement” to create a new social order devoid of exploitation is no small order.

Still, it seems that Du Bois, though an economic separatist, did not think of these as irreconcilable. Consider his remarkable and beautiful quote:

I propose as the next step which the American Negro can give to the world a new and unique gift. We have tried song and laughter and with rare good humor a bit condescending the world has received it; we have given the world work, hard, backbreaking labor and the world has let black John Henry die breaking his heart to beat the machine.

It is now our business to give the world an example of intelligent cooperation so that when the new industrial commonwealth comes we can go into it as an experienced people and not be left outside as mere beggars….If leading the way as intelligent cooperating consumers, we rid ourselves of the ideas of a price system and become pioneer servants of the common good, we can enter the new city as men(sic) and not mules.

Later in his life, Du Bois wrote: “We have a chance to teach industrial and cultural democracy to a world that bitterly needs it.”

In all of these words, I hear him saying that through persistently developing their own forms of collective self-reliance, African Americans can offer the rest of humanity the gift of both hope for and experience in the building of an entirely new commonwealth, based no longer on the “price system”. That “larger movement”, in short, can be guided by what has been achieved through separatist efforts to build their own cooperative enterprises and communities. Perhaps then autonomy, separatism, nationalism, and racial solidarity can be both worthwhile in themselves and a rich source of pioneering and allied working models of a wider vision which all men and women, of all diverse cultures and loyalties, can help shape and find fulfillment within.

Moreover, I think he would see Collective Courage, this marvelous and celebratory historical record filled with lessons of racial solidarity through cooperative and community-driven enterprise, as an essential part of that “new and unique gift” he urged African Americans to bring to the rest of us.

And let’s go further: we can well imagine that many other cultures have their own stories of cooperative enterprise and democratically organized community life. It is often said that if we ignore our history, we are doomed to re-endure it. But in some cases, we may also neglect many courageous and inspiring parts of that history which shine light onto our best possible futures. Collective Courage has enabled all of us to reclaim a part of our humane past (and present) that can do that just that; may many others, from many cultural loyalties, draw from their own cooperative histories with the same lucidity and resolve.

Len Krimerman co-founded and is a core editor of Grassroots Economic Organizing. He lives, works, dances, writes, and dreams in rural eastern Connecticut, and has helped build bridges between the many varieties of grassroots democracy over the past four decades.